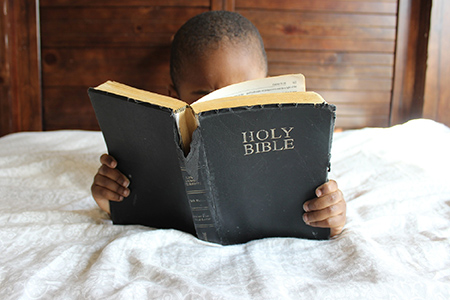 Jeremiah 31:7 - 9
Thus says the LORD: Shout with joy for Jacob, exult at the head of the nations; proclaim your praise and say: The LORD has delivered his people, the remnant of Israel. Behold, I will bring them back from the land of the north; I will gather them from the ends of the world, with the blind and the lame in their midst, the mothers and those with child; they shall return as an immense throng. They departed in tears, but I will console them and guide them; I will lead them to brooks of water, on a level road, so that none shall stumble. For I am a father to Israel, Ephraim is my first-born.

Hebrews 5:1 - 6
Brothers and sisters: Every high priest is taken from among men and made their representative before God, to offer gifts and sacrifices for sins. He is able to deal patiently with the ignorant and erring, for he himself is beset by weakness and so, for this reason, must make sin offerings for himself as well as for the people. No one takes this honor upon himself but only when called by God, just as Aaron was. In the same way, it was not Christ who glorified himself in becoming high priest, but rather the one who said to him: You are my son: this day I have begotten you; just as he says in another place: You are a priest forever according to the order of Melchizedek.

Mark 10:46 - 52
As Jesus was leaving Jericho with his disciples and a sizable crowd, Bartimaeus, a blind man, the son of Timaeus, sat by the roadside begging. On hearing that it was Jesus of Nazareth, he began to cry out and say, "Jesus, son of David, have pity on me." And many rebuked him, telling him to be silent. But he kept calling out all the more, "Son of David, have pity on me." Jesus stopped and said, "Call him." So they called the blind man, saying to him, "Take courage; get up, Jesus is calling you." He threw aside his cloak, sprang up, and came to Jesus. Jesus said to him in reply, "What do you want me to do for you?" The blind man replied to him, "Master, I want to see." Jesus told him, "Go your way; your faith has saved you." Immediately he received his sight and followed him on the way.

I’ve been working on a 3-episode video series on Typology lately. It is scheduled to be broadcasted live by Fountain of Love and Life in December as part of its continued education program on the Fishers’ Summit platform. Typology is a rich and powerful biblical interpretation that sees the past, the present, and the ultimate future of the history of salvation as a connected and meaningful whole. It sees in the persons, events, places, and institutions of the Old Testament the foreshadowing of those in the New Testament. Conversely, it also sees in the persons, events, places, and institutions of the New Testament the fulfilment of those in the Old Testament. As St. Augustine put it, the New Testament is hidden in the Old, and the Old Testament revealed in the New (CCC 129). Sounds confusing? Read on or, better still, join me when the fore-mentioned video series is aired. Please visit the FollowChrist.me website for more details.

Incidentally, this Sunday’s readings give us a good preview of this amazing biblical interpretation technique that enables us to see the unity of the Old and New Testaments. Let’s take a moment to admire the Divine Author’s awe-inspiring and mysterious writing skills that clearly demonstrate “the dynamic movement toward the fulfillment of the divine plan” (CCC 130).

Through Jeremiah, the Lord promises to bring Israel, His chosen people in the Old Testament, back home from exile in “the land of the north”; He will “gather them from the ends of the world” (Jer 31:8). We can understand this promise typologically as God’s plan to bring the Church, His chosen people in the New Testament, back home from exile in this world to His heavenly kingdom. As the New Testament Church is catholic or universal, God’s promise is fulfilled in the here and now to the extent that the Church members are literally gathered from everywhere in the world. By the power of the baptismal grace and the work of the Holy Spirit, they are transformed to become the children of God, living in communion in the Body of Christ, a heavenly reality.

In other words, the Church is the new Israel. The Israel of the Old Testament is only a transitory “type” or image. Its role is to prefigure and point the world to the Church of the New Testament, the new Israel. Note that the transitory type, Israel, and its fulfilment, the Church, are similar in that both have to go into exile: Israel in the hostility of a foreign land, Babylon; the Church in the turmoil of a world of sin, our planet earth. Both are to be gathered “from the ends of the world” and given their rightful place to live: Israel in its homeland; the Church in the Body of Christ.

On the other hand, they differ in that Israel, having served its role of pointing us to the New Testament Church, is now only one of the ancient powers in history, a mere shadow of its former self. Its fulfilment, the Church, however, will continue to get transformed until she emerges in her perfect and definitive self. When will that be, and how will she appear? On “the wedding day of the Lamb”, according to Revelation; at which time “a new heaven and a new earth” will emerge and the Church will become “the holy city, a new Jerusalem, coming down out of heaven from God, prepared as a bride adorned for her husband” (Rev 19:7, 21:1-2)!

God’s promise, made through Jeremiah’s prophecy, tells us not only WHAT He will give us (a new Israel, the Church) and HOW (she will be gathered “from the ends of the world”, i.e., she’ll be catholic and universal), but also what to expect when it’s time for the fulfilment to be realized: the blind and the lame will be in their midst; the mothers and those with child - the basic tenet of human families - shall be consoled and guided (cf. Jer 31:8-9). It is clear, therefore, that the Church’s selection of this Sunday’s gospel in which Jesus cured a blind man is no coincidence. Together with Jesus’ other miracles in the Gospel, in which the blind and the lame are cured, the message of this Sunday’s gospel is loud and clear: God, who descended in human form through a woman and broke into human history, is here to bring to fulfilment His promise of a new Israel, made through Jeremiah (e.g., John 9:1-7, Luke 5:17-26).

The second reading from the Letter to the Hebrews is another classic for Typology lovers. The Old Testament high priest is a type pointing us to Christ, the eternal High Priest who traces his origin not to Aaron and the Levi but to the order of Melchizedek, the first high priest to ever appear in the Bible. But that will be another discussion of Typology for a whole separate Sunday reflection!

Ask Fr. Francis – Why is there no one to continue writing the Bible?

Is the Bible merely a book?