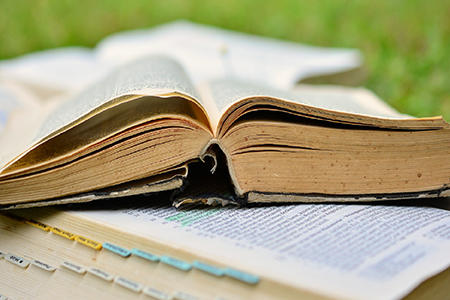 2 KINGS 4:42-44
A man came from Baal-shalishah bringing to Elisha, the man of God, twenty barley loaves made from the firstfruits, and fresh grain in the ear. Elisha said, “Give it to the people to eat.” But his servant objected, “How can I set this before a hundred people?” Elisha insisted, “Give it to the people to eat.” “For thus says the LORD, ‘They shall eat and there shall be some left over.’” And when they had eaten, there was some left over, as the LORD had said.

EPHESIANS 4:1-6
Brothers and sisters: I, a prisoner for the Lord, urge you to live in a manner worthy of the call you have received, with all humility and gentleness, with patience, bearing with one another through love, striving to preserve the unity of the spirit through the bond of peace: one body and one Spirit, as you were also called to the one hope of your call; one Lord, one faith, one baptism; one God and Father of all, who is over all and through all and in all.

JOHN 6:1-15
Jesus went across the Sea of Galilee. A large crowd followed him, because they saw the signs he was performing on the sick. Jesus went up on the mountain, and there he sat down with his disciples. The Jewish feast of Passover was near. When Jesus raised his eyes and saw that a large crowd was coming to him, he said to Philip, “Where can we buy enough food for them to eat?” He said this to test him, because he himself knew what he was going to do. Philip answered him, “Two hundred days’ wages worth of food would not be enough for each of them to have a little.” One of his disciples, Andrew, the brother of Simon Peter, said to him, “There is a boy here who has five barley loaves and two fish; but what good are these for so many?” Jesus said, “Have the people recline.” Now there was a great deal of grass in that place. So the men reclined, about five thousand in number. Then Jesus took the loaves, gave thanks, and distributed them to those who were reclining, and also as much of the fish as they wanted. When they had had their fill, he said to his disciples, “Gather the fragments left over, so that nothing will be wasted.” So they collected them, and filled twelve wicker baskets with fragments from the five barley loaves that had been more than they could eat. When the people saw the sign he had done, they said, “This is truly the Prophet, the one who is to come into the world.” Since Jesus knew that they were going to come and carry him off to make him king, he withdrew again to the mountain alone.

Through all the words of Sacred Scripture, God speaks only one single Word”, and that Word is Jesus (CCC 102). The Church Fathers also taught that “one and the same Word of God extends throughout Scripture, that it is one and the same Utterance that resounds in the mouths of all the sacred writers” (St. Augustine, En. In Ps 103, 4, 1:PL, 1378). Personally, I like Pope Benedict XVI’s eloquent expression of this concept. He considers the Sacred Scripture, which is inspired by the Holy Spirit and written by many different sacred writers, “a symphony of the word, a single word expressed in multiple ways: a polyphonic hymn” (Verbum Domini 7). Jesus himself says just as much in his encounter with the two disciples on their way to Emmaus. He interprets to them what “all the scriptures” say about him, “beginning with Moses and all the prophets” (Lk 24:27).

The Church has always read the Scripture on the understanding that the whole book is about Christ and points us to him. If something in the Scripture, especially in the Old Testament books, reminds us of Christ or bears resemblance to something he does or teaches in the Gospel, don’t see it as just an isolated “coincidence”. The resemblance or connection is often the Divine Author’s extraordinary literary expression, an integral part of His awe-inspiring narrative, meant to enlighten our mind, edify our faith, and draw us deeper into God’s unfathomable love and mystery. More importantly, their relationship is often sequential, one leading to the other, anticipating and heralding the final and definitive act in Christ. When the long-anticipated Christ event finally arrives, it often catches us completely by surprise: while the resemblance to the harbinger OT event is there, it comes with a theological significance and finality no scriptural readers could have expected.

A good case in point is this Sunday’s readings. Both Prophet Elisha and Jesus are the architect of an incredible miracle. Elisha orders his servant to use “twenty barely loaves made from the first fruits, and fresh grain in the ear” to feed a hundred men (2 Kgs 4:42). When the servant objects because Elisha’s order seems so impossible, Elisha doubles down and promises that “They shall eat and there shall be some left over” (v. 43). The miracle happens just as Elisha has promised. In the gospel reading, Jesus orders his disciples to feed 5,000 men, which Philip considers as a mission impossible. “Two hundred days' wages worth of food would not be enough for each of them to have a little”, he protests (Jn 6:7). But the mission, seemingly impossible for Philip, is miraculously completed by Jesus using “five barley loaves and two fish”. When all said and done, everyone is full and leftover fragments collected are enough to fill twelve wicker baskets (Jn 6:9-13).

While both miracles are impressive and look similar, Jesus’ story is one that emerges from a Passover background. Central to the Feast of Passover, as we know well, is food consumption – the eating of the Passover lamb and unleavened bread (Ex 12:1-20). In ancient Jewish tradition, sharing meal is more than just a basic biological need driven by human appetite; it symbolizes unity and communion among the partakers of the meal. More importantly, its liturgical expression in relations with God communicates a divine will to strike a relationship of intimacy with the human party, as was the case in the ratification of the Mt. Sinai covenant, when Moses, Aaron, Nadab, Abihu together with the seventy elders of Israel went up the holy mountain where they “beheld God, and they ate and drank” (Ex 24:11; Theological-Historical Commission, The Eucharist, Gift of Divine Life, p.103). With this ancient Jewish tradition in mind, we recognize in Jesus’ miracle an added layer of mystique and significance: It points us to the unity, communion, and intimacy of the Eucharist.

Following the principle that one and the same Word extends through the Scripture, we can safely conclude from these two readings that Elisha’s multiplication of the loaves is a prelude or prefiguration, if you will, of Jesus’ multiplication of the loaves in John 6, pointing us to something bigger, more significant and definitive that Christ will bring. What’s that something? Note that Jesus’ multiplication of the loaves is strategically placed immediately before his extensive discourse on the “bread of life” in 6:35-59, which is by all accounts a discourse on the Eucharist (Ignatius Catholic Study Bible New Testament on John 6:1-14). Therefore, the two episodes can be seen as John’s one-two punch that introduces us to “the source and summit of the Christian life” – the Eucharist (CCC 1324).

In summary, it’s fair to say that Jesus’ multiplication of the loaves is prefigured by Elisha; its meaning and significance revealed and magnified by his discourse on the bread of life; its institution as a Sacrament liturgized in the Last Supper; its celebration faithfully carried out by the Church, his spouse. All of this has been mysteriously scripted by the sacred writers over the years in the course of the human history, under the inspiration of the Divine Author; and is finally “finished” by Jesus on the Cross, where the Body of Christ, the Heavenly Bread lovingly placed on a wooden holder for our consumption, is hung for all to behold and adore (Jn 19:30). Thus, the whole human history that has gone so wrong because of “the fruit of the tree” in the beginning, is finally set aright by the divine fruit of the tree – Christ on the Cross (Genesis 3:3).