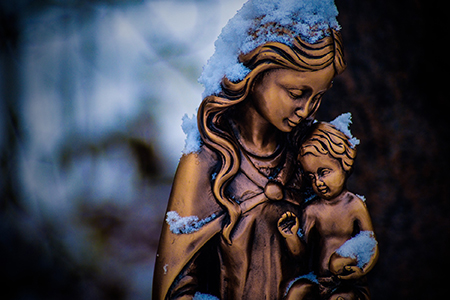 Micah 5:1-4A
Thus says the LORD: You, Bethlehem-Ephrathah too small to be among the clans of Judah, from you shall come forth for me one who is to be ruler in Israel; whose origin is from of old, from ancient times. Therefore the Lord will give them up, until the time when she who is to give birth has borne, and the rest of his kindred shall return to the children of Israel. He shall stand firm and shepherd his flock by the strength of the LORD, in the majestic name of the LORD, his God; and they shall remain, for now his greatness shall reach to the ends of the earth; he shall be peace.

Hebrews 10:5:10
Brothers and sisters: When Christ came into the world, he said: “Sacrifice and offering you did not desire, but a body you prepared for me; in holocausts and sin offerings you took no delight. Then I said, ‘As is written of me in the scroll, behold, I come to do your will, O God.’“ First he says, “Sacrifices and offerings, holocausts and sin offerings, you neither desired nor delighted in.” These are offered according to the law. Then he says, “Behold, I come to do your will.” He takes away the first to establish the second. By this “will,” we have been consecrated through the offering of the body of Jesus Christ once for all.

Luke 1:39-45
Mary set out and traveled to the hill country in haste to a town of Judah, where she entered the house of Zechariah and greeted Elizabeth. When Elizabeth heard Mary’s greeting, the infant leaped in her womb, and Elizabeth, filled with the Holy Spirit, cried out in a loud voice and said, “Blessed are you among women, and blessed is the fruit of your womb. And how does this happen to me, that the mother of my Lord should come to me? For at the moment the sound of your greeting reached my ears, the infant in my womb leaped for joy. Blessed are you who believed that what was spoken to you by the Lord would be fulfilled.”

It is our privilege that each year during Advent, in the celebration of the Liturgy, to hear the different ancient prophecies that were once foretold and, to retell the plan of salvation that was once proclaimed (rf First Reading). In preparing the coming of the Messiah, the Old Testament “gradually bring into clearer light the figure of a woman, the Mother of the Redeemer” (Lumen Gentium, Par 55). In the Epistle to the Hebrews (Second Reading), St Paul says, “When Christ came into the world, he said, 'Sacrifice and offering you did not desire, but a body you prepared for me' ”, this body was born of the Virgin Mary, the chosen Daughter of Israel (Heb. 10:5). On this fourth and the last Sunday of Advent, we are invited to reflect on the mystery of Mary in whom both the promises of the Lord and the salvation of humankind are fulfilled.

The mystery of Mary can never be separated from the mystery of the Incarnation, without which, Mary would remain an anonymous ordinary woman, hidden among many of the nameless women in Palestine and lost in the ebbs and flows of the human history. However, in order to fully enter into the mystery of Mary, we have to recognize the intimate connection among the mysteries of our Christian faith (Nexus Mysteriorum). It is the belief of the Church that all of the divine mysteries of salvation are inter-related and that no one mystery exists in isolation from one another, that is, each is incomplete without the others (rf Vatican Council I DS 3016). With this in mind, we can see that though Mary's mystery springs from the mystery of the Incarnation which begins at the angel's annunciation of her exceptional conception, it does not stop there but continues throughout and even after Jesus' death; for instance, at the wedding of Cana (the initiation of Jesus' public ministry rf Jn 2:5,11), at the foot of the cross (the culmination of the redemption mystery rf Jn 19:26-27) and at Pentecost (the birth of the Church rf Acts 1:14). Elizabeth's words: “Blessed are you who believed that what was spoken to you by the Lord would be fulfilled” are more than words of praise. It is a salutation affirming that through Mary comes the mystery of salvation (Lk 1:45).

Though Mary is a creature, God has entrusted Himself entirely to her. The Son of God is her son and the Holy Spirit is her spouse. She is an exemplary model of faith, hope and charity; not only for us individually but also for the Church collectively. Just as Mary accompanied Jesus while He was on earth, she also accompanies the Church and her people now. And as Mary is the one who perfectly identifies with Christ, so the Church, being His mystical body, naturally recognizes her as her Mother and by extension, also her vocation and mission. St Bernard of Clairvaux who once wrote, “Of Mary there is never enough” (rf De Maria numquam satis), the importance of Mary's role in the divine mysteries could never be overstated.

Today we are given an example to follow as we soon welcome the birth of our Lord. Let us come to a deeper understanding of Mary in the mystery of our Christian faith. Let us welcome the Word of God into our own lives as Mary did. Let our devotion to her be sincere and let her draw us evermore closer into the mystery of her son whose mother she became that we might be saved.