Through the Eyes of Faith 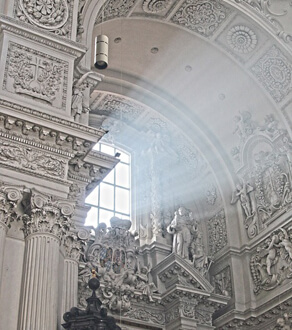 Wisdom 18:6 - 9
The night of the passover was known beforehand to our fathers, that, with sure knowledge of the oaths in which they put their faith, they might have courage. Your people awaited the salvation of the just and the destruction of their foes. For when you punished our adversaries, in this you glorified us whom you had summoned. For in secret the holy children of the good were offering sacrifice and putting into effect with one accord the divine institution.

Hebrews 11:1-2, 8-19
Brothers and sisters: Faith is the realization of what is hoped for and evidence of things not seen. Because of it the ancients were well attested. By faith Abraham obeyed when he was called to go out to a place that he was to receive as an inheritance; he went out, not knowing where he was to go. By faith he sojourned in the promised land as in a foreign country, dwelling in tents with Isaac and Jacob, heirs of the same promise; for he was looking forward to the city with foundations, whose architect and maker is God. By faith he received power to generate, even though he was past the normal age —and Sarah herself was sterile— for he thought that the one who had made the promise was trustworthy. So it was that there came forth from one man, himself as good as dead, descendants as numerous as the stars in the sky and as countless as the sands on the seashore. All these died in faith. They did not receive what had been promised but saw it and greeted it from afar and acknowledged themselves to be strangers and aliens on earth, for those who speak thus show that they are seeking a homeland. If they had been thinking of the land from which they had come, they would have had opportunity to return. But now they desire a better homeland, a heavenly one. Therefore, God is not ashamed to be called their God, for he has prepared a city for them. By faith Abraham, when put to the test, offered up Isaac, and he who had received the promises was ready to offer his only son, of whom it was said, “Through Isaac descendants shall bear your name.” He reasoned that God was able to raise even from the dead, and he received Isaac back as a symbol.

Luke 12:32-48
Jesus said to his disciples: “Do not be afraid any longer, little flock, for your Father is pleased to give you the kingdom. Sell your belongings and give alms. Provide money bags for yourselves that do not wear out, an inexhaustible treasure in heaven that no thief can reach nor moth destroy. For where your treasure is, there also will your heart be. “Gird your loins and light your lamps and be like servants who await their master’s return from a wedding, ready to open immediately when he comes and knocks. Blessed are those servants whom the master finds vigilant on his arrival. Amen, I say to you, he will gird himself, have them recline at table, and proceed to wait on them. And should he come in the second or third watch and find them prepared in this way, blessed are those servants. Be sure of this: if the master of the house had known the hour when the thief was coming, he would not have let his house be broken into. You also must be prepared, for at an hour you do not expect, the Son of Man will come.” Then Peter said, “Lord, is this parable meant for us or for everyone?” And the Lord replied, “Who, then, is the faithful and prudent steward whom the master will put in charge of his servants to distribute the food allowance at the proper time? Blessed is that servant whom his master on arrival finds doing so. Truly, I say to you, the master will put the servant in charge of all his property. But if that servant says to himself, ‘My master is delayed in coming,’ and begins to beat the menservants and the maidservants, to eat and drink and get drunk, then that servant’s master will come on an unexpected day and at an unknown hour and will punish the servant severely and assign him a place with the unfaithful. That servant who knew his master’s will but did not make preparations nor act in accord with his will shall be beaten severely; and the servant who was ignorant of his master’s will but acted in a way deserving of a severe beating shall be beaten only lightly. Much will be required of the person entrusted with much, and still more will be demanded of the person entrusted with more.”

In this age of atheism and materialism, many people see faith as essentially an interior attitude that is subjective, imaginative, and psychological. It is, in a word, objectively unreal and subjectively self-deceiving. People claiming to have faith, so they say, are living in a self-invented world that does not exist. Foolish are the believers because they are dreaming their lives away.

Not so according to this Sunday's readings.

More than a subjective and self-deceiving attitude that lacks objective reality, the Christian faith is grounded on what God has done in human history and what the ancients have attested to, namely, the Passover events (cf. Wisdom 18:6) and the fulfillments of God's promises to Abraham, both immediate and remote, including Jesus' incarnation, suffering, and resurrection, and the coming of the Kingdom of Heaven (cf. Hebrews 11:8-19).

More than a mere mental conviction or a feeble hope that something will somehow become a reality, faith “is the realization of what is hoped for and evidence of things not seen” (Hebrews 11:1). In other words, faith actually “gives us even now something of the reality we are waiting for” (Benedict XVI, Spe Salvi, n.7). We are convinced that even now our faith has brought us blessings aplenty; even now we are growing in holiness and becoming more and more like Jesus due to our faith. Faith enables us to see things that are not seen in this world.

Once again, we need St. John Paul II to help us understand the supreme nobility of the act of faith: “Men and women can accomplish no more important act in their lives than the act of faith” because “it is here that freedom reaches the certainty of truth and chooses to live in that truth” (Fides et Ratio, n.13).