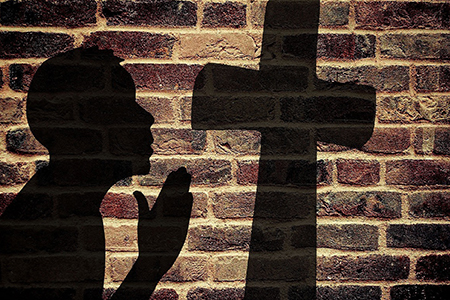 Joshua 24:1-2A, 15-17, 18B
Joshua gathered together all the tribes of Israel at Shechem, summoning their elders, their leaders, their judges, and their officers. When they stood in ranks before God, Joshua addressed all the people: “If it does not please you to serve the LORD, decide today whom you will serve, the gods your fathers served beyond the River or the gods of the Amorites in whose country you are now dwelling. As for me and my household, we will serve the LORD.” But the people answered, “Far be it from us to forsake the LORD for the service of other gods. For it was the LORD, our God, who brought us and our fathers up out of the land of Egypt, out of a state of slavery. He performed those great miracles before our very eyes and protected us along our entire journey and among the peoples through whom we passed. Therefore we also will serve the LORD, for he is our God.”

Ephesians 5:21 - 32
Brothers and sisters: Be subordinate to one another out of reverence for Christ. Wives should be subordinate to their husbands as to the Lord. For the husband is head of his wife just as Christ is head of the church, he himself the savior of the body. As the church is subordinate to Christ, so wives should be subordinate to their husbands in everything. Husbands, love your wives, even as Christ loved the church and handed himself over for her to sanctify her, cleansing her by the bath of water with the word, that he might present to himself the church in splendor, without spot or wrinkle or any such thing, that she might be holy and without blemish. So also husbands should love their wives as their own bodies. He who loves his wife loves himself. For no one hates his own flesh but rather nourishes and cherishes it, even as Christ does the church, because we are members of his body. For this reason a man shall leave his father and his mother and be joined to his wife, and the two shall become one flesh. This is a great mystery, but I speak in reference to Christ and the church.

John 6:60 - 69
Many of Jesus’disciples who were listening said, “This saying is hard; who can accept it?” Since Jesus knew that his disciples were murmuring about this, he said to them, “Does this shock you? What if you were to see the Son of Man ascending to where he was before? It is the spirit that gives life, while the flesh is of no avail. The words I have spoken to you are Spirit and life. But there are some of you who do not believe.” Jesus knew from the beginning the ones who would not believe and the one who would betray him. And he said, “For this reason I have told you that no one can come to me unless it is granted him by my Father.” As a result of this, many of his disciples returned to their former way of life and no longer accompanied him. Jesus then said to the Twelve, “Do you also want to leave?” Simon Peter answered him, “Master, to whom shall we go? You have the words of eternal life. We have come to believe and are convinced that you are the Holy One of God.”

Joshua’s exhortation to Israel in this Sunday’s first reading is reminiscent of another famous Old Testament scene in which Moses, whose death is imminent on the threshold of Israel’s entry into the Promised Land, reminds God’s chosen people of their covenant with God, and urges them to keep “His commandments, statutes and decrees” (Deuteronomy 30:16).

Shortly before his death and having accomplished his mission of leading Israel to enter and settle in the Promised Land, Joshua warns Israel to stay away from other gods and remain faithful to the covenant of the Lord, “who brought us and our fathers up out of the land of Egypt, out of a state of slavery” (Joshua 24:17).

Imminent too is Jesus’ death at the Last Supper. Like Moses and Joshua before him, he is on the threshold of accomplishing his mission of liberating the People of God, the New Israel. He wants his Church, represented by the 12 apostles, to remember how much God loves them. He assures them that the Father’s love and glory is in the Son– “Now is the Son of Man glorified, and God is glorified in him” (John 13:31). The full manifestation of this love and glory is in the Son’s acceptance of the suffering at the hands of evil men; it shows “the breadth and length and height and depth” of Christ’s love for the world (cf. Ignatius Catholic Study Bible, John 13:31; Eph 3:18).

Unlike Moses and Joshua, whose exhortations are for Israel to remain faithful to the Sinai Covenant by observing the Law, Jesus’ exhortation is for his followers to obey a new commandment. “As I have loved you, so you also should love one another” (John 13:34). To love one another is the only way to observe the New Covenant established on the Cross.

As always, this is how typology works: OT scenes bear strong resemblance to a NT scene, showing the anticipatory nature of the OT scenes - they are pointing us to Christ. But the emergence of the NT scene involving Christ always contains a surprise element, which in this case is Jesus’ New Law of love. Not only is this element surprising, in the sense that Jesus is no longer asking us to follow the OT law; it is also definitive, in the sense that his New Law, or the Law of the Gospel, “fulfills, refines, surpasses and leads the Old Law to its perfection” (CCC1967, Rom 10:4). When I first encountered scriptural passages such as these, I was mightily impressed. The spiritual enlightenment, or should I say “astonishment”, left me completely flabbergasted and happy beyond myself. Somehow the Divine Author knows – and only He does! – how to piece together seamlessly scriptural events that appear to be unrelated at first glance. In doing so, He shows people who read the Bible in awe and reverence what His definitive message really is. Thus, as St. Augustine says, the New is hidden in the Old, and the Old revealed in the New (CCC 129).

But the lectionary selection of Paul’s teaching on marriage in the 2nd reading and Jesus’ insistence on the necessity of consuming his flesh and blood in the gospel reading is an interesting twist that seems to have left the biblical enlightenment above a little cloudy and baffling. How are these New Testament teachings and the OT theme of faithfulness to God related? Let’s go deeper into the two readings. We’ll find that the “cloudiness” we see is in fact the smoothness of the cream, added to make our coffee thick and savory to the taste!

The first thing that comes to mind when marriage is mentioned is love. But what is love without faithfulness? Can a man truly love a woman if he has relationships with more than one woman? “That is why a man leaves his father and mother and clings to his wife, and the two of them become one body” (Genesis 2:24). Husband and wife literally and sacramentally become “one body” in their conjugal union, performed in the context of a binding and everlasting marital covenant. Performing the same conjugal act with a woman, or women, other than one’s own wife is a desecration of the sacredness of the conjugal act, which points to the one-body unity between Christ, the Groom, and his Bride, the Church. It’s no longer “one body” but many. The unifying meaning, so central to the conjugal act in the divine plan, has been cast aside; shamelessly trashed in a momentary outburst of beastly desires.

It’s a stroke of scriptural genius that the Church uses the 2nd reading from Ephesians 5 to connect the virtue of faithfulness to God (theme of the first reading) with the virtue of faithfulness in marriage. For what is love without faithfulness? When understood in this context, the lectionary selection of John 6 - Jesus’ insistence that we unite with him in the Eucharist – also makes perfect sense. The Eucharist is so indispensable to our unity with Jesus in the communion of the Body of Christ that he is prepared to part way with the Twelve, should they side with the crowd to reject his bread of life discourse: “Do you also want to leave (6:67)?” For what is faithfulness without unity?

The Faithful and Prudent Steward