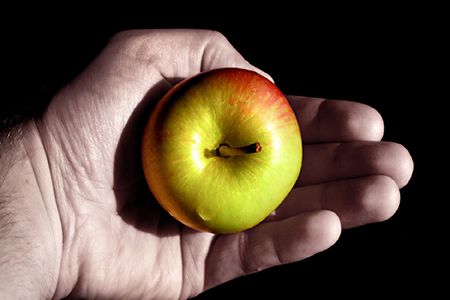 Genesis 2:7-9; 3:1-7
The LORD God formed man out of the clay of the ground and blew into his nostrils the breath of life, and so man became a living being. Then the LORD God planted a garden in Eden, in the east, and placed there the man whom he had formed. Out of the ground the LORD God made various trees grow that were delightful to look at and good for food, with the tree of life in the middle of the garden and the tree of the knowledge of good and evil. Now the serpent was the most cunning of all the animals that the LORD God had made. The serpent asked the woman, "Did God really tell you not to eat from any of the trees in the garden?" The woman answered the serpent: "We may eat of the fruit of the trees in the garden; it is only about the fruit of the tree in the middle of the garden that God said, 'You shall not eat it or even touch it, lest you die.'" But the serpent said to the woman: "You certainly will not die! No, God knows well that the moment you eat of it your eyes will be opened and you will be like gods who know what is good and what is evil." The woman saw that the tree was good for food, pleasing to the eyes, and desirable for gaining wisdom. So she took some of its fruit and ate it; and she also gave some to her husband, who was with her, and he ate it. Then the eyes of both of them were opened, and they realized that they were naked; so they sewed fig leaves together and made loincloths for themselves.

Romans 5:12-19
Brothers and sisters: Through one man sin entered the world, and through sin, death, and thus death came to all men, inasmuch as all sinned— for up to the time of the law, sin was in the world, though sin is not accounted when there is no law. But death reigned from Adam to Moses, even over those who did not sin after the pattern of the trespass of Adam, who is the type of the one who was to come. But the gift is not like the transgression. For if by the transgression of the one, the many died, how much more did the grace of God and the gracious gift of the one man Jesus Christ overflow for the many. And the gift is not like the result of the one who sinned. For after one sin there was the judgment that brought condemnation; but the gift, after many transgressions, brought acquittal. For if, by the transgression of the one, death came to reign through that one, how much more will those who receive the abundance of grace and of the gift of justification come to reign in life through the one Jesus Christ. In conclusion, just as through one transgression condemnation came upon all, so, through one righteous act, acquittal and life came to all. For just as through the disobedience of the one man the many were made sinners, so, through the obedience of the one, the many will be made righteous.

Matthew 4:1-11
At that time Jesus was led by the Spirit into the desert to be tempted by the devil. He fasted for forty days and forty nights, and afterwards he was hungry. The tempter approached and said to him, "If you are the Son of God, command that these stones become loaves of bread." He said in reply, "It is written: One does not live on bread alone, but on every word that comes forth from the mouth of God." Then the devil took him to the holy city, and made him stand on the parapet of the temple, and said to him, "If you are the Son of God, throw yourself down. For it is written: He will command his angels concerning you and with their hands they will support you, lest you dash your foot against a stone." Jesus answered him, "Again it is written, You shall not put the Lord, your God, to the test." Then the devil took him up to a very high mountain, and showed him all the kingdoms of the world in their magnificence, and he said to him, "All these I shall give to you, if you will prostrate yourself and worship me." At this, Jesus said to him, "Get away, Satan! It is written: The Lord, your God, shall you worship and him alone shall you serve." Then the devil left him and, behold, angels came and ministered to him.

The subject matter of this Sunday's Readings focuses on “temptation”. There are countless temptations that each of us faces but there are two great temptations in the human history which have brought a tremendous repercussion in our lives. The first one, recounted in the First Reading, plunges the human race into sin with the consequence of condemnation and death. The second one, recounted in the Gospel Reading, begins the way back in victory with the consequence of justification and eternal life. In the Second Reading, St Paul summarizes neatly the parallels and the contrasts of the two great temptations: sin is overcome by grace, condemnation by justification and death by eternal life. But what is temptation and why does God allow us to be tempted?

Temptation generally means a desire/urge to do or have something that we know we should not do or have. But why do we desire to do or have something that is wrong or unwise? The reason is none other than what is presented to Eve, “ . . . the tree was good for food, pleasing to the eyes, and desirable for gaining wisdom” (Gn 3:6), that is, temptation works by appealing to our physical, aesthetic or intellectual senses. Temptation is most appealing when it contains some degree of truth; and is strongest when it disguises under the appearance of goodness so that self-gratification can be justified. According to the teachings of Christianity, temptation is the enticement to disobey God's words, with the objective to distort God's way or to defy God's will. While Christians understand that temptation comes from the devil, the flesh and the world, the nature of the bait is the same. In short, temptation is an invitation to walk away from the path that leads to God; to incite us to obtain satisfactions different from what God intends.

In English, the word “temptation” usually carries a negative connotation; but in Hebrew and Greek, the word has a broader meaning. It can also mean “testing”, like the testing of Abraham and Job (rf Gen 22:1, Job 1-2). Jesus, being God Himself, cannot be tempted; but as the incarnate Son of God, He can be tested (rf Jas 1:13). If God the Father allowed His son to be tested, we can be sure that we have no exemption. Testing allows us to prove our character, to reveal the depth and integrity of our faith in God. Like flexing the muscle in order to strengthen it, every temptation can be an opportunity to help us grow in our spiritual lives and enhance our spiritual health. In the process of struggling with temptation, we become more mature in moral formation and in volition. We learn to handle our given freedom properly and come to realize our shortcomings and weaknesses. Temptation thus can be a guard rail for us lest we mislead ourselves into over confidence and self-reliance. “Temptations are very profitable to man, troublesome and grievous though they may be, for in them a man is humbled, purified and instructed” (Imitation of Christ Bk 1 Ch 13). St Leo the Great also said: “Virtue is nothing without the trial of temptation, for there is no conflict without an enemy, no victory without strife”.

Thus, sin occurs if we are conquered by temptation like Eve and David (rf Gn 3:6, 2 Sam 11:1-5). Joseph, enticed by the chief steward Potiphar's wife, is a great example of one who does not let temptation to take root and become sin (rf Gen 39:6-12). Saints overcome many temptations in order to be purified and perfected in their virtues. St. Paul shares with us his own struggle, “when I want to do right, evil is at hand. For I take delight in the law of God, in my inner self, but I see in my members another principle at war with the law of my mind” (Rm7:22-23). He gives some advice on avoiding situations that may lead to temptation: “conduct ourselves properly as in the day, not in orgies and drunkenness, not in promiscuity and licentiousness, not in rivalry and jealousy. But put on the Lord Jesus Christ, and make no provision for the desires of the flesh” (Rm 13:14). The good news is that as Christians we do not face temptation alone, for we have a Savior who has fought and struggled with temptation and is always victorious (rf Hebrews 2:18). God “will provide the way out” when we are tempted (1 Cor 10:13), but it is our responsibility to be vigilant, especially at the onset of a temptation. “Fire tries iron, and temptation a just man. We often know not what we are able to do, but temptations discover what we are” (Imitation of Christ Bk 1 Ch 13).

Therefore, we should not be afraid or despair when we are tempted. With patience, true humility and prayers and by the grace of God, little by little, we can make progress. Yes, God does not preclude us from temptations but He sustains us in the midst of them (rf Hebrew 4:15–16).

Why are you fearful, O you of little faith?