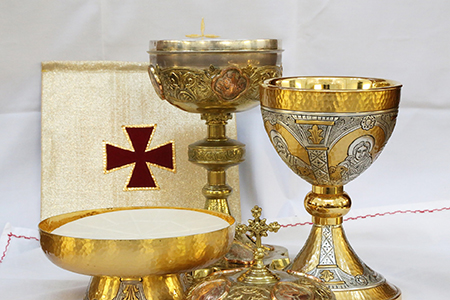 2 KINGS 4:42-44
A man came from Baal-shalishah bringing to Elisha, the man of God, twenty barley loaves made from the firstfruits, and fresh grain in the ear. Elisha said, “Give it to the people to eat.” But his servant objected, “How can I set this before a hundred people?” Elisha insisted, “Give it to the people to eat.” “For thus says the LORD, ‘They shall eat and there shall be some left over.’” And when they had eaten, there was some left over, as the LORD had said.

EPHESIANS 4:1-6
Brothers and sisters: I, a prisoner for the Lord, urge you to live in a manner worthy of the call you have received, with all humility and gentleness, with patience, bearing with one another through love, striving to preserve the unity of the spirit through the bond of peace: one body and one Spirit, as you were also called to the one hope of your call; one Lord, one faith, one baptism; one God and Father of all, who is over all and through all and in all.

JOHN 6:1-15
Jesus went across the Sea of Galilee. A large crowd followed him, because they saw the signs he was performing on the sick. Jesus went up on the mountain, and there he sat down with his disciples. The Jewish feast of Passover was near. When Jesus raised his eyes and saw that a large crowd was coming to him, he said to Philip, “Where can we buy enough food for them to eat?” He said this to test him, because he himself knew what he was going to do. Philip answered him, “Two hundred days’ wages worth of food would not be enough for each of them to have a little.” One of his disciples, Andrew, the brother of Simon Peter, said to him, “There is a boy here who has five barley loaves and two fish; but what good are these for so many?” Jesus said, “Have the people recline.” Now there was a great deal of grass in that place. So the men reclined, about five thousand in number. Then Jesus took the loaves, gave thanks, and distributed them to those who were reclining, and also as much of the fish as they wanted. When they had had their fill, he said to his disciples, “Gather the fragments left over, so that nothing will be wasted.” So they collected them, and filled twelve wicker baskets with fragments from the five barley loaves that had been more than they could eat. When the people saw the sign he had done, they said, “This is truly the Prophet, the one who is to come into the world.” Since Jesus knew that they were going to come and carry him off to make him king, he withdrew again to the mountain alone.

One Saturday night, we were watching a documentary "Surviving the Andes Plane Crash", and it turned out to be a heartfelt memorable movie. It was about Uruguayan Air Force Flight 571, a chartered flight carrying 45 passengers and crew, including a rugby union team, friends and family, that crashed in extremely heavy snow at high altitude in the remote Andes. The survivors learned on days after that a search for their flight had been cancelled. Nevertheless, after a gut-wrenching 72 days on their own, the final 16 survivors were finally rescued on Dec. 23, 1972. How did they survive? Facing starvation and certain death, they reluctantly decided to eat their dead friends and family members whose bodies had been preserved in the snow! One survivor said in an interview, "Our common goal was to survive — but what we lacked was food. We had long since run out of the meagre pickings we’d found on the plane, and there was no vegetation or animal life to be found. After just a few days we were feeling the sensation of our own bodies consuming themselves just to remain alive. Before long we would become too weak to recover from starvation." At first, I felt it was most awful and disgusting to eat the flesh of their friends and family! Then after a deep reflection, it really inspires me to contemplate on this truth: In a survival mode, humans can be pushed beyond our limits to consume human flesh for survival. How true it is when Jesus says, "Whoever eats my flesh and drinks my blood has eternal life" (John 6:54).

In today’s Gospel, John reminds us that Christ is indeed present in the Eucharist. We reflect on the miracle of Multiplication of the Loaves, in which the Lord saw the crowd of “five thousand in number” (Jn 6:10). They were hungry, tired, and isolated. The crowd symbolizes Israel, but even more broadly, the whole humanity. Human race is hungry not just for physical food, but above all, hungry for life, meaning, purpose and joy. We are all in that crowd coming to Jesus. Unfortunately, we are often misled by contemporary secular values to fulfill the hungry hearts in wrong ways: Pleasure, money, power, and honor. In contrast, what did Jesus do to feed the crowd’s "starvation"? He took the five barley loaves and two fish, and then He multiplied them so as to feed the crowd. St. Thomas Aquinas says, "The great metaphor from the Eucharist is food for the journey which gets us through our day" (O Sacrum Convivium). These people, the crowd, were hungry and tired, and Jesus gave them subsistence to get them through to the next day. Thinking back to the documentary, if the survivors did not have the subsistence, they simply could not go on. In the same way, the Eucharist is food for the soul. It is a sacrament which sustains us, and gets us through the journey of life.

Furthermore, another title of the Eucharist is Holy Communion. “Then Jesus took the loaves, gave thanks, and distributed them to those who were reclining, and also as much of the fish as they wanted” (Jn 6:11). When we eat the Body of Christ together, we are conforming to him, and through him we are in unity with each other. The Church is a mystical body, in which Jesus is the vine, and we are the branches. What sustains this organic body is the Eucharist which we eat and drink together, and in it, we build up our communion with each other. Lastly, the disciples "gather the fragments left over, and filled twelve wicker baskets with fragments from the five barley loaves that had been more than they could eat" (Jn 6:12-13). When grace manifests itself, it is superabundant, not only enough for a short while, but for ever more, until we “had our fill” (Jn 6:12). The Lord, the supreme good, has exquisitely diffused Himself, and it is the penetration and superabundance of God's grace that overflows our heart, so that our hunger and desire are fulfilled completely.

Let us give thanks to our Lord with the glorious, wondrous, superabundant, and most beautiful Eucharist given to our Church.

"I am the bread of life, broken for all. Eat now and hunger no more." MUSIC - LET US BE BREAD, Thomas Porter