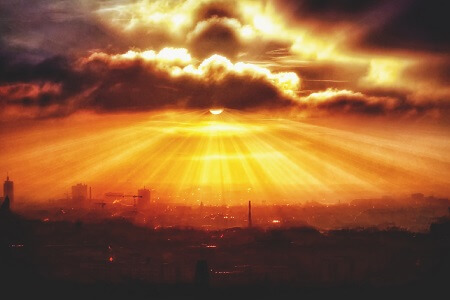 Exodus 20:1-17
In those days, God delivered all these commandments: "I, the LORD, am your God, who brought you out of the land of Egypt, that place of slavery. You shall not have other gods besides me. You shall not carve idols for yourselves in the shape of anything in the sky above or on the earth below or in the waters beneath the earth; you shall not bow down before them or worship them. For I, the LORD, your God, am a jealous God, inflicting punishment for their fathers' wickedness on the children of those who hate me, down to the third and fourth generation; but bestowing mercy down to the thousandth generation on the children of those who love me and keep my commandments. "You shall not take the name of the LORD, your God, in vain. For the LORD will not leave unpunished the one who takes his name in vain. "Remember to keep holy the sabbath day. Six days you may labor and do all your work, but the seventh day is the sabbath of the LORD, your God. No work may be done then either by you, or your son or daughter, or your male or female slave, or your beast, or by the alien who lives with you. In six days the Lord made the heavens and the earth, the sea and all that is in them; but on the seventh day he rested. That is why the LORD has blessed the sabbath day and made it holy. "Honor your father and your mother, that you may have a long life in the land which the LORD, your God, is giving you. You shall not kill. You shall not commit adultery. You shall not steal. You shall not bear false witness against your neighbor. You shall not covet your neighbor's house. You shall not covet your neighbor's wife, nor his male or female slave, nor his ox or ass, nor anything else that belongs to him."

1 Corinthians 1:22-25
Brothers and sisters: Jews demand signs and Greeks look for wisdom, but we proclaim Christ crucified, a stumbling block to Jews and foolishness to Gentiles, but to those who are called, Jews and Greeks alike, Christ the power of God and the wisdom of God. For the foolishness of God is wiser than human wisdom, and the weakness of God is stronger than human strength.

John 2:13-25
Since the Passover of the Jews was near, Jesus went up to Jerusalem. He found in the temple area those who sold oxen, sheep, and doves, as well as the money changers seated there. He made a whip out of cords and drove them all out of the temple area, with the sheep and oxen, and spilled the coins of the money changers and overturned their tables, and to those who sold doves he said, "Take these out of here, and stop making my Father's house a marketplace." His disciples recalled the words of Scripture, Zeal for your house will consume me. At this the Jews answered and said to him, "What sign can you show us for doing this?" Jesus answered and said to them, "Destroy this temple and in three days I will raise it up." The Jews said, "This temple has been under construction for forty-six years, and you will raise it up in three days?" But he was speaking about the temple of his body. Therefore, when he was raised from the dead, his disciples remembered that he had said this, and they came to believe the Scripture and the word Jesus had spoken. While he was in Jerusalem for the feast of Passover, many began to believe in his name when they saw the signs he was doing. But Jesus would not trust himself to them because he knew them all, and did not need anyone to testify about human nature. He himself understood it well.

The psalm of this Sunday extolls the virtues of the Law. The proclamation of the Decalogue on Mount Sinai in reading one also reminds us that the heart of the Old Testament Law is the Ten Commandments. But when people speak of “the Law”, they also refer to the ceremonial, purity, and dietary laws of the Mosaic Code, namely, circumcision, sacrifices and offerings, Sabbaths and festivals, purifications and unclean foods, and much else. As Christians, we no longer observe these laws. Given our Christian non-observance, how do we explain the psalmist's tribute to the Law in Psalm 19? Is our non-observance a rejection of the Old Testament teachings that generally equate righteousness and piety with strict observance of the Law? More importantly, Jesus himself teaches that “until heaven and earth pass away, not the smallest letter or the smallest part of a letter will pass from the law” (Mt. 5:18). Has Christianity deviated from Jesus' teaching? Is it guilty of spurning God's commandments?

To compound this perplexing issue further, Jesus himself appears to be dismissive of the Old Testament laws when he disagrees with Moses on divorce and remarriage (cf. Mt. 19:8), downplays the significance of unclean foods (cf. Mk 7:15), and heals on the Sabbath (cf. Mk 3:1-6). How do we explain this apparent contradiction? Here we have a scriptural equation that doesn't seem to add up: the Old Testament requirement of unreserved submission to the Law vs. the New Testament teaching of Christian non-observance.

Some people believe the solution lies in accepting either the Old Testament teaching or the New Testament teaching, but not both. The problem with this view is that it sees the Bible not in its harmonious whole but as a collection of conflicting books that are seriously polarized. The Judaizers took this view and disagreed with St. Paul and the early Church. In their zeal to protect the Law of Moses, they joined hands with Rome to persecute the Christians. The heresy of the 2nd-century Marcionism, on the other hand, advocated for the abandonment of the Old Testament God whose “unreasonable” moral precepts were deemed as incompatible with the teaching of the “good God” of the New Testament.

When caught in a bind like this, we Catholics always have the luxury of turning to the Church Fathers and 2000 years of Church tradition for an answer. Saints and believers before us had already encountered most of our problems. Instead of re-inventing the wheels, why not turn to them for help? The Patristic writers' answer is complex. To put it all in a nutshell, they had identified different categories of law in the Old Testament books: those with universal and abiding application (usually identified with the Decalogue) and precepts necessitated by the historical circumstances of God's people. They called the latter “the secondary legislation”. For example, the sacrificial and purity laws were imposed as a response to the sin of the golden calf (cf. Ex 32). Such laws are prophetic in nature in that they point us to Christ, in whom the Law finds perfect fulfillment. Jesus' emergence means that the purpose of the secondary legislation has been served and thus observance is no longer necessary. (For a better understanding of the Church Fathers' teachings on this issue, see M. Barber's article, “The Yoke of Servitude – Christian Non-Observance of the Law's Cultic Precepts in Patristic Sources”, in Letter & Spirit, vol 7, St. Paul's Center for Biblical Theology.)

This Sunday's gospel is a good illustration of the Patristic teaching above. Jesus' aggressive actions in the cleansing of the Temple are a prophetic sign of the Temple's imminent destruction which also signifies the passing away of the Old Testament sacrificial laws (see Ignatius Catholic Study Bible New Testament on John 2:15). He chooses to do it when the Passover is near because the sacrificial laws of the Passover will be fulfilled by the Pascal Mystery of the Lamb of God, and the Temple replaced by the Body of Christ - the Heavenly Temple, “the true tabernacle that the Lord, not man, set up” (Hebrews 8:2). Once we have the real Temple and the eternal, heavenly liturgy, what's the point of continuing to follow the sacrificial laws of the Old Testament, which are but “a copy and shadow” of the heavenly realities (Hebrews 8:5)?