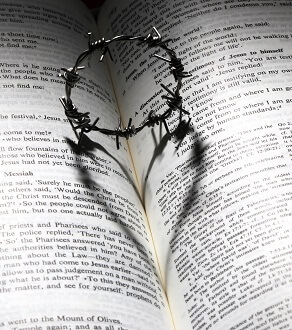 Deuteronomy 4:1-2, 6-8
Moses said to the people: “Now, Israel, hear the statutes and decrees which I am teaching you to observe, that you may live, and may enter in and take possession of the land which the LORD, the God of your fathers, is giving you. In your observance of the commandments of the LORD, your God, which I enjoin upon you, you shall not add to what I command you nor subtract from it. Observe them carefully, for thus will you give evidence of your wisdom and intelligence to the nations, who will hear of all these statutes and say, ‘This great nation is truly a wise and intelligent people.’ For what great nation is there that has gods so close to it as the LORD, our God, is to us whenever we call upon him? Or what great nation has statutes and decrees that are as just as this whole law which I am setting before you today?”

James 1:17-18, 21B-22. 27
Brothers and sisters: All good giving and every perfect gift is from above, coming down from the Father of lights, with whom there is no alteration or shadow caused by change. He willed to give us birth by the word of truth that we may be a kind of firstfruits of his creatures. Humbly welcome the word that has been planted in you and is able to save your souls. Be doers of the word and not hearers only, deluding yourselves. Religion that is pure and undefiled before God and the Father is this: to care for orphans and widows in their affliction and to keep oneself unstained by the world.

Mark 7:1-8, 14-15, 21-23
When the Pharisees with some scribes who had come from Jerusalem gathered around Jesus, they observed that some of his disciples ate their meals with unclean, that is, unwashed, hands. —For the Pharisees and, in fact, all Jews, do not eat without carefully washing their hands, keeping the tradition of the elders. And on coming from the marketplace they do not eat without purifying themselves. And there are many other things that they have traditionally observed, the purification of cups and jugs and kettles and beds. — So the Pharisees and scribes questioned him, “Why do your disciples not follow the tradition of the elders but instead eat a meal with unclean hands?” He responded, “Well did Isaiah prophesy about you hypocrites, as it is written: This people honors me with their lips, but their hearts are far from me; in vain do they worship me, teaching as doctrines human precepts. You disregard God’s commandment but cling to human tradition.” He summoned the crowd again and said to them, “Hear me, all of you, and understand. Nothing that enters one from outside can defile that person; but the things that come out from within are what defile. “From within people, from their hearts, come evil thoughts, unchastity, theft, murder, adultery, greed, malice, deceit, licentiousness, envy, blasphemy, arrogance, folly. All these evils come from within and they defile.”

Of all the events, institutions, and people that characterize the Old Testament – patriarchs, crossing the Red Sea, Passover, covenants, priests, prophets, kings, Jerusalem Temple, etc. - “law” is one that really stands out. By “law”, we refer to the Decalogue, the various law codes preserved in the Pentateuch, and the new laws and customs of the emerging Judaism in the later years of Israel’s history (see New Jerome Biblical Commentary 67:132). St. Paul simply generalized the Old Testament as a time when men were “under the law” (Rm 6:15).

The exhortation to observe the law, taught so forcefully by Moses in the first reading, is a resounding theme in the OT books. The rule was straightforward: if Israel obeyed God and kept His commandments, statues and decrees, they would live and receive God’s blessing; if not, they would perish (cf. Deut 30:15-17). But try as they might, the people of Israel just couldn’t muster up enough will to follow Moses’ exhortation sincerely and persistently. The result was as straightforward as the rule: God’s punishment in the form of exile and generations of repressive foreign domination.

To rub salt into the wound, the legal corpus itself was tainted over time by what Jesus called in today’s gospel reading “human precepts” and “human tradition” (Mk. 7:7-8) that were often trivial and even unreasonable. By Jesus’ time the whole system smacked of hypocrisy and legalism that favored the elite and powerful. No wonder as far back as the exilic time, the prophet Ezekiel had referred to such laws as “statutes that were not good, and ordinances through which they could not live” (Eze. 20:25).

So what are we supposed to make of this puzzling biblical account that spanned more than a millennium of Israel’s history and formed the backbone of OT teaching? One that appeared to be just a futile divine exercise: God imposed on men His law, warning that failure to follow would result in punishments; men failed to follow God’s law and sure enough they got punished; and finally the law itself became trivialized, burdensome, incomprehensible, and unreasonable. (Sounds familiar? Yes, that's just the nature of all laws, the result of legalism.)

The lesson to be learned is that man cannot achieve goodness, least of all perfection and holiness, by relying on his own effort to follow the law. Since time immemorial, the ultimate human dream was to be self-sufficient, to be in control of his own destiny, to become like God or, to be more succinct, to become God. This story of human pride has been foretold and summed up in the Garden of Eden account, in which man desired to see and know like God (cf. Gen 3:6); as well as in the Babel tower account that portrayed man’s desire to reach the sky (cf. Gen 11:4). The reason for man’s misery was his heart, which was twisted, rebellious, and in need of healing. Man was in dire need of a “heart surgery”, the procedures and benefits of which had been listed in detail by Ezekiel: “I will sprinkle clean water upon you to cleanse you from all your impurities, and from all your idols I will cleanse you. I will give you a new heart and place a new spirit within you, taking from your bodies your stony hearts and giving you [hearts of flesh]. I will put my spirit within you and make you live by my statutes, careful to observe my decrees” (Eze. 36:25-27).

The Holy Spirit, in other words, is our surgeon in charge; the medicine that untwists or cleanses our hearts is not antibiotics and steroids but the purity of baptismal water! With hearts made of flesh and filled with the Holy Spirit, we will be able to observe God’s law as statutes and ordinances “written not in ink but by the Spirit of the living God, not on tablets of stone but on tablets that are hearts of flesh” (2 Cor 3:3).

Still, why did God go through all these troubles of putting Israel “under the law” (Rm. 6:15) to begin with? Why not give them the solution outlined in Ezekiel’s prophesy above from day one? As usual, it’s St. Augustine who came to our rescue by answering this difficult question in one simple statement: “The law was given that grace might be sought; and grace was given that the law might be fulfilled” (De Spiritu et Littera, 19, 34: CSEL 60, 187). Man’s attempt to fulfill the requirements of law on his own was a complete failure that convinced him what he really needed was grace. What grace? The grace of redemption! In the Lord Jesus Christ, by virtue of his redemptive grace and not our own human effort, we can fulfill, and have already fulfilled, the stern requirements of the law! Alleluia!