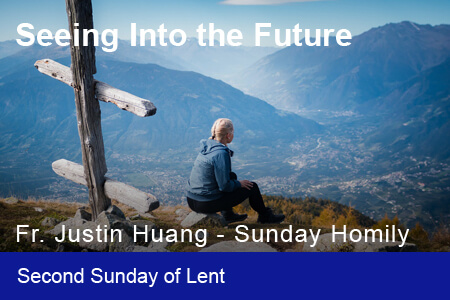 Genesis 22:1-2, 9A, 10-13, 15-18
God put Abraham to the test. He called to him, "Abraham!" "Here I am!" he replied. Then God said: "Take your son Isaac, your only one, whom you love, and go to the land of Moriah. There you shall offer him up as a holocaust on a height that I will point out to you." When they came to the place of which God had told him, Abraham built an altar there and arranged the wood on it. Then he reached out and took the knife to slaughter his son. But the LORD's messenger called to him from heaven, "Abraham, Abraham!" "Here I am!" he answered. "Do not lay your hand on the boy," said the messenger. "Do not do the least thing to him. I know now how devoted you are to God, since you did not withhold from me your own beloved son." As Abraham looked about, he spied a ram caught by its horns in the thicket. So he went and took the ram and offered it up as a holocaust in place of his son. Again the LORD's messenger called to Abraham from heaven and said: "I swear by myself, declares the LORD, that because you acted as you did in not withholding from me your beloved son, I will bless you abundantly and make your descendants as countless as the stars of the sky and the sands of the seashore; your descendants shall take possession of the gates of their enemies, and in your descendants all the nations of the earth shall find blessing— all this because you obeyed my command."

Romans 8:31B-34
Brothers and sisters: If God is for us, who can be against us? He who did not spare his own Son but handed him over for us all, how will he not also give us everything else along with him? Who will bring a charge against God's chosen ones? It is God who acquits us, who will condemn? Christ Jesus it is who died—or, rather, was raised— who also is at the right hand of God, who indeed intercedes for us.

Mark 9:2-10
Jesus took Peter, James, and John and led them up a high mountain apart by themselves. And he was transfigured before them, and his clothes became dazzling white, such as no fuller on earth could bleach them. Then Elijah appeared to them along with Moses, and they were conversing with Jesus. Then Peter said to Jesus in reply, "Rabbi, it is good that we are here! Let us make three tents: one for you, one for Moses, and one for Elijah." He hardly knew what to say, they were so terrified. Then a cloud came, casting a shadow over them; from the cloud came a voice, "This is my beloved Son. Listen to him." Suddenly, looking around, they no longer saw anyone but Jesus alone with them. As they were coming down from the mountain, he charged them not to relate what they had seen to anyone, except when the Son of Man had risen from the dead. So they kept the matter to themselves, questioning what rising from the dead meant.

Over the years, I’ve reminded you how God takes care of us in suffering, but today I’m challenging you to make it your own by doing a spiritual exercise.

As part of our Lenten wilderness experience, you need to take on more responsibility. Many of you get discouraged too easily, and rely on external factors too much to lift you up. So I’m going to teach you a meditation that can strengthen you.

This meditation takes a suffering in our life, allow Jesus to take us into the future, and see how He will draw good from it. For example, a mother was once worried about her children, but then, in prayer, Jesus showed her their future, and that gave her strength to continue to guide them. Or, I have a mental illness, and, during prayer, I hear Jesus say to me that He will make good come from it.

There was an inspiring commercial a few weeks ago that was celebrated by pro-lifers: A Christian couple (https://www.clmagazine.org/topic/human-dignity/shes-come-this-far-by-faith-the-unstoppable-jessica-long/) adopts a child from Siberia, Russia, even though they’re told that the child has special needs, and God does miracles in their lives. The lesson for us is the way the mother looks ahead beyond the suffering, saying, “It might not be easy, but it’ll be amazing.” Here it is (https://www.youtube.com/watch?v=fqWG5_7nwyk to 0:54).

The Gospel gives us the account of Jesus’ Transfiguration. “Jesus took with him Peter and James and John, and led them up a high mountain apart, by themselves” (Mk 9:2). Spiritual authors comment that Jesus took these three apostles, because only these three would see Jesus at His weakest point, when He would be in the Garden of Gethsemane, sweating blood. Because their faith in Him would be tempted, Jesus prepared them in advance by showing them His glory (Cf. CCC 556).

“And he was transfigured before them, and his clothes became dazzling white, such as no one on earth could bleach them” (Mk 9:2-3). When Jesus was conceived and assumed a human nature, His divinity was hidden; no one could see that He was God. But, for this brief moment, Peter, James, and John see His beauty shining literally through His face and clothes. It’s as if Jesus were saying to them, “Later, you will see My suffering, but, trust Me and everything that I say, because I am God; I will rise again.”

During today’s Mass, we’ll hear these words in the preface, “On the holy mountain he manifested to them his glory, to show… that the Passion leads to the glory of the Resurrection.” But keep in mind that the Transfiguration will never be as strengthening as the Resurrection; the Transfiguration gives us enough strength to endure the suffering; it doesn’t take suffering away.

“Then a cloud overshadowed them, and from the cloud there came a voice, ‘This is my Son, the Beloved; listen to him!’” (Mk 9:7). In the Old Testament, a cloud was a symbol of God, so now, this voice reminds them to trust and listen to Jesus.

Jesus wants to show us the future and strengthen us. But you have to do the work. You pray, and Jesus will lift you up.

This prayer should last between ten minutes and one hour. These are the three steps:

1) Location: Can you go to a place where you normally don’t go? Go to a mountain, to the water, to a park. Like the Transfiguration, we need to be in a setting where we experience how small we are, how big the world is, and that God is bigger than it all. Quiet yourself down and find a comfortable position.

3) Finish the prayer with these words of Abraham, from the First Reading: “God himself will provide” (Gen 22:8).

I haven’t provided you with many examples of how seeing into the future strengthens us, because I want you to do it yourself. But we will end with one such example, a sad but moving story from the Old Testament, in 2 Maccabees 7, commonly known as “The Martyrdom of the mother and her seven sons. It begins: “It happened… that seven brothers and their mother were arrested and were being compelled by the king, under torture with whips and thongs, to partake of unlawful swine’s flesh” (1). This happens around 175 B.C. when Greek rulers took over Jerusalem and forbade Jewish people from practicing their faith. The first brother refuses to transgress God’s law, so King Antiochus tortures him to death, while his family looks on. Then they torture the second brother in the same way. At his last breath, he says, “You accursed wretch, you dismiss from this present life, but the King of the universe will raise us up to an everlasting renewal of life, because we have died for his laws” (9). When the third brother is brought to the torturers, he stretches out his hands, “I got these from Heaven… and from him I hope to get them back again” (11). Because they were all convinced of the resurrection to new life, they regarded “sufferings as nothing” (12). The fourth speaks similarly when he’s about to die, and then they kill the fifth, and the sixth.

The text says, “The mother was especially admirable and worthy of honorable memory. Although she saw her seven sons perish within a single day, she bore it with good courage because of her hope in the Lord” (20).

The king was enraged at her, and promised to the seventh and youngest son prosperity and riches, if he would give in. But he refused. So the king called the mother to persuade her son. The text says, “Leaning close to him, she spoke in their native language as follows… ‘My son, have pity on me. I carried you nine months in my womb, and nursed you for three years… and have taken care of you. I beg you, my child, to look at the heaven and the earth… and recognize that God did not make them out of things that existed. And in the same way the human race came into being. Do not fear this butcher, but prove worthy of your brothers. Accept death, so that in God’s mercy I may get you back again along with your brothers’” (27-29). The son interrupts his mother and says to the king, “What are you waiting for?” So the king executes him, and, “Last of all, the mother died, after her sons” (41).

This story always inspires me. I’m often filled with fear, hesitation, reluctance, but nothing can truly harm me. If I look at Jesus’ power and His Resurrection, that’s where I’m going too! We can receive the same strength if we turn to Jesus in prayer. We can endure suffering because we see His Resurrection.