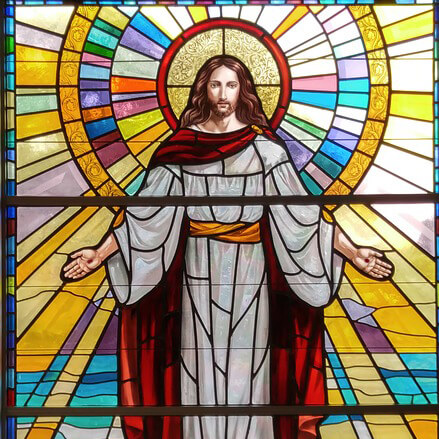 Second Sunday of Easter (or Sunday of Divine Mercy)

Acts 5:12-16
Many signs and wonders were done among the people at the hands of the apostles. They were all together in Solomon’s portico. None of the others dared to join them, but the people esteemed them. Yet more than ever, believers in the Lord, great numbers of men and women, were added to them. Thus they even carried the sick out into the streets and laid them on cots and mats so that when Peter came by, at least his shadow might fall on one or another of them. A large number of people from the towns in the vicinity of Jerusalem also gathered, bringing the sick and those disturbed by unclean spirits, and they were all cured.

Revelation 1:9-11A, 12-13, 17-19
I, John, your brother, who share with you the distress, the kingdom, and the endurance we have in Jesus, found myself on the island called Patmos because I proclaimed God’s word and gave testimony to Jesus. I was caught up in spirit on the Lord’s day and heard behind me a voice as loud as a trumpet, which said, “Write on a scroll what you see.” Then I turned to see whose voice it was that spoke to me, and when I turned, I saw seven gold lampstands and in the midst of the lampstands one like a son of man, wearing an ankle-length robe, with a gold sash around his chest. When I caught sight of him, I fell down at his feet as though dead. He touched me with his right hand and said, “Do not be afraid. I am the first and the last, the one who lives. Once I was dead, but now I am alive forever and ever. I hold the keys to death and the netherworld. Write down, therefore, what you have seen, and what is happening, and what will happen afterwards.”

John 20:19-31
On the evening of that first day of the week, when the doors were locked, where the disciples were, for fear of the Jews, Jesus came and stood in their midst and said to them, “Peace be with you.” When he had said this, he showed them his hands and his side. The disciples rejoiced when they saw the Lord. Jesus said to them again, “Peace be with you. As the Father has sent me, so I send you.” And when he had said this, he breathed on them and said to them, “Receive the Holy Spirit. Whose sins you forgive are forgiven them, and whose sins you retain are retained.” Thomas, called Didymus, one of the Twelve, was not with them when Jesus came. So the other disciples said to him, “We have seen the Lord.” But he said to them, “Unless I see the mark of the nails in his hands and put my finger into the nailmarks and put my hand into his side, I will not believe.” Now a week later his disciples were again inside and Thomas was with them. Jesus came, although the doors were locked, and stood in their midst and said, “Peace be with you.” Then he said to Thomas, “Put your finger here and see my hands, and bring your hand and put it into my side, and do not be unbelieving, but believe.” Thomas answered and said to him, “My Lord and my God!” Jesus said to him, “Have you come to believe because you have seen me? Blessed are those who have not seen and have believed.” Now Jesus did many other signs in the presence of his disciples that are not written in this book. But these are written that you may come to believe that Jesus is the Christ, the Son of God, and that through this belief you may have life in his name.

“My Lord and my God!” (Jn 20:28) – In a few simple words, Thomas’ exclamation on encountering the risen Christ is counted amongst some of the best known verses in the Bible.

In the Greek translation of the Old Testament, “Kyrios” – “Lord” – is a title used to refer to YHWH, the God of Israel (CCC 446). Thomas’ exclamation which is directed to Jesus, in other words, represents his assertion of Jesus’ divinity. Similar assertions can also be found in other NT passages, e.g. Phil. 2:11.

Scriptural evidences of Jesus’ divinity, both direct and indirect, are rich and numerous in both the New and the Old Testaments. In addition to Thomas’ assertion that addressed Jesus as God in this Sunday’s Gospel reading, the following scriptural passages should also be mentioned:

Through the ecumenical councils of Nicaea (325), Ephesus (431), Chalcedon (451), and Constantinople (553), the Church affirms that Jesus is inseparably true God and true man.

Why was it necessary for God, the Father, to save us by sending His own Son, who was divine? Why didn’t He simply send, for example, an angel or a really nice guy like Abraham or Moses? This is because sin had ushered in a huge separation between God and man, which could only be bridged by Jesus who, as the Son of God and the “only Mediator between God and the human race” (1 Tim 2:5), was both human and divine.

No one summed up this important doctrine better than St. Athanasius, the great defender of Jesus’ divinity against Arianism, when he said, “The Son of God became the Son of Man so that the sons of men could become the sons of God.”

On this second Sunday of Easter, let’s rejoice in hope because Jesus, who “hold the keys to death and the netherworld”, has overpowered death and is “alive forever and ever” (Rev 1:18). We wait for him to return to fulfill his promise that “everyone who sees the Son and believes in him may have eternal life, and I shall raise him (on) the last day” (Jn 6:40).