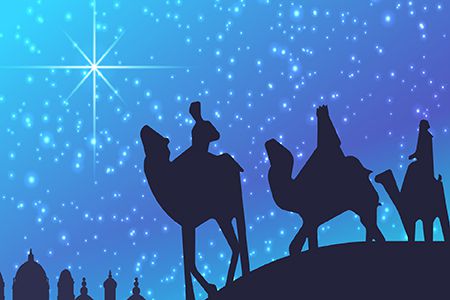 The Epiphany of the Lord

Isaiah 60:1-6
Rise up in splendor, Jerusalem! Your light has come, the glory of the Lord shines upon you. See, darkness covers the earth, and thick clouds cover the peoples; but upon you the LORD shines, and over you appears his glory. Nations shall walk by your light, and kings by your shining radiance. Raise your eyes and look about; they all gather and come to you: your sons come from afar, and your daughters in the arms of their nurses. Then you shall be radiant at what you see, your heart shall throb and overflow, for the riches of the sea shall be emptied out before you, the wealth of nations shall be brought to you. Caravans of camels shall fill you, dromedaries from Midian and Ephah; all from Sheba shall come bearing gold and frankincense, and proclaiming the praises of the LORD.

Ephesians 3:2-3A, 5-6
Brothers and sisters: You have heard of the stewardship of God’s grace that was given to me for your benefit, namely, that the mystery was made known to me by revelation. It was not made known to people in other generations as it has now been revealed to his holy apostles and prophets by the Spirit: that the Gentiles are coheirs, members of the same body, and copartners in the promise in Christ Jesus through the gospel.

Matthew 2:1-12
When Jesus was born in Bethlehem of Judea, in the days of King Herod, behold, magi from the east arrived in Jerusalem, saying, “Where is the newborn king of the Jews? We saw his star at its rising and have come to do him homage.” When King Herod heard this, he was greatly troubled, and all Jerusalem with him. Assembling all the chief priests and the scribes of the people, He inquired of them where the Christ was to be born. They said to him, “In Bethlehem of Judea, for thus it has been written through the prophet: And you, Bethlehem, land of Judah, are by no means least among the rulers of Judah; since from you shall come a ruler, who is to shepherd my people Israel.” Then Herod called the magi secretly and ascertained from them the time of the star’s appearance. He sent them to Bethlehem and said, “Go and search diligently for the child. When you have found him, bring me word, that I too may go and do him homage.” After their audience with the king they set out. And behold, the star that they had seen at its rising preceded them, until it came and stopped over the place where the child was. They were overjoyed at seeing the star, and on entering the house they saw the child with Mary his mother. They prostrated themselves and did him homage. Then they opened their treasures and offered him gifts of gold, frankincense, and myrrh. And having been warned in a dream not to return to Herod, they departed for their country by another way.

With the Feast of the Epiphany of the Lord, our celebration of the Mystery of the Incarnation during the Christmas season comes to a conclusion. Although today's Gospel Reading narrates the episode of the Magi, it is to the simple souls of the shepherds that Christ first manifests Himself (besides His parents) (rf Lk 2:8-11). The manners of Christ's manifestation are different for the shepherds and the Magi. Being chosen, the shepherds directly receive from the angels the “good news of great joy” (Lk 2:10, 14). Knowledgeable in astronomical signs, the Magi are guided by a star to the promised king who has been prophesied by the pagan prophet Balaam (rf Mt 2:2, Nm 24:17). While it should not be difficult to understand why the shepherds are being chosen (cf Lk 1:51-53, 6:20-21; Mt 5:3-10), what about the Magi?

In his homilies on the Gospel of Matthew, St. John Chrysostom reflected with these words: “For what reason induced [the three Magi], or the hope of what benefits, to worship one who was king so far off . . . And why did they at all worship one who was in swaddling clothes? For if He had been a grown man, one might say, that in expectation of the succor they should receive from Him.” Thus he concluded that they were not in search for an earthly king for “they would have neither adored nor offered gifts” when all they saw was “a shed, a manger, a child in swaddling clothes and a poor mother.” The Magi, through natural science, discover by faith what Herod and the religious leaders miss despite their possession of the Scriptures. “[The Magi] sought a heavenly king, though they found in Him no sign of royal pre-eminence, yet content with the testimony of the star alone, they adored: for they saw a man and they acknowledged a God”. In their humility, the Magi bend down to the poor infant and thus open up God's plan of salvation for the Gentiles.

The story of the Magi provides us with lessons that are both symbolic and instructive. The Magi represent people of all cultures. They are the first, followed by many more throughout the centuries - great and small, kings and slaves - all making pilgrimages to Christ. All are coheirs, sharers and members of the same body (rf Second Reading Eph 3:2-3). Light shines upon those who seek God and opens their hearts for the Truth. Light disappears when there is deception, hypocrisy, arrogance and violence (the star disappears when the Magi have an audience with King Herod rf Mt 2:1-2, 9-10). The Magi teach us the virtues of fortitude, perseverance and humility. Attentive to astronomical events, the Magi are willing and bold enough to explore and undertake a lengthy uncertain journey to a faraway land in search of something in which they believe. When it seems they are lost without guidance, they look for ways to continue. Ignoring the danger of possible envy and rivalry, they come to inquire King Herod of the newborn king (rf Mt 2:2). Despite their prestigious status, they humble themselves to kneel before the meagre child and offer him the precious gifts without hesitation, complaint or disappointment (rf Mt 2:11).

In our own search for God, do we admire the shepherds who find God with minimal effort? Or do we see ourselves as the Magi engage in great strain? The important fact is not how much time and effort are involved but the final outcome. In either case, both the shepherds and the Magi discover God. The former “returned glorifying and praising God for all that they had heard and seen” (Lk 2:20) and the latter “went back to their own country by another way” as new persons (Mt 2:12). Let us recapture the heavenly greetings: “Glory to God in the highest, and on earth peace among people of good will” (Lk 2:14). Be it as simple as the shepherds or as wise as the Magi, God's blessings are the same for those who seek Him with good will and humility.