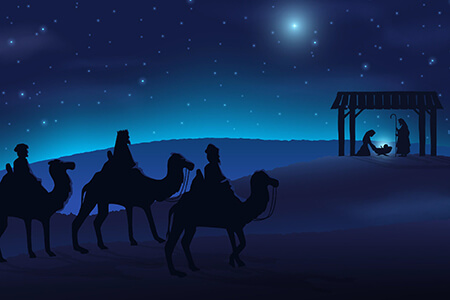 The Epiphany of the Lord

Isaiah 60:1-6
Rise up in splendor, Jerusalem! Your light has come, the glory of the Lord shines upon you. See, darkness covers the earth, and thick clouds cover the peoples; but upon you the LORD shines, and over you appears his glory. Nations shall walk by your light, and kings by your shining radiance. Raise your eyes and look about; they all gather and come to you: your sons come from afar, and your daughters in the arms of their nurses. Then you shall be radiant at what you see, your heart shall throb and overflow, for the riches of the sea shall be emptied out before you, the wealth of nations shall be brought to you. Caravans of camels shall fill you, dromedaries from Midian and Ephah; all from Sheba shall come bearing gold and frankincense, and proclaiming the praises of the LORD.

Ephesians 3:2-3A, 5-6
Brothers and sisters: You have heard of the stewardship of God’s grace that was given to me for your benefit, namely, that the mystery was made known to me by revelation. It was not made known to people in other generations as it has now been revealed to his holy apostles and prophets by the Spirit: that the Gentiles are coheirs, members of the same body, and copartners in the promise in Christ Jesus through the gospel.

Matthew 2:1-12
When Jesus was born in Bethlehem of Judea, in the days of King Herod, behold, magi from the east arrived in Jerusalem, saying, “Where is the newborn king of the Jews? We saw his star at its rising and have come to do him homage.” When King Herod heard this, he was greatly troubled, and all Jerusalem with him. Assembling all the chief priests and the scribes of the people, He inquired of them where the Christ was to be born. They said to him, “In Bethlehem of Judea, for thus it has been written through the prophet: And you, Bethlehem, land of Judah, are by no means least among the rulers of Judah; since from you shall come a ruler, who is to shepherd my people Israel.” Then Herod called the magi secretly and ascertained from them the time of the star’s appearance. He sent them to Bethlehem and said, “Go and search diligently for the child. When you have found him, bring me word, that I too may go and do him homage.” After their audience with the king they set out. And behold, the star that they had seen at its rising preceded them, until it came and stopped over the place where the child was. They were overjoyed at seeing the star, and on entering the house they saw the child with Mary his mother. They prostrated themselves and did him homage. Then they opened their treasures and offered him gifts of gold, frankincense, and myrrh. And having been warned in a dream not to return to Herod, they departed for their country by another way.

Epiphany means “revelation”. The Solemnity of the Epiphany is historically associated with three “revelations” of Christ: to the Magi, the foreigners coming to Jesus, in a manifestation of the universality of his salvation; at his baptism in the Jordan, where the Trinitarian mystery is revealed; and at Cana in Galilee, where the overflowing joy of his nuptial union with the Church is highlighted through the first of his signs (note 1). All three revelations remind us of the immensity of God’s saving love in Jesus as the Christmas mystery continues to unfold.

What makes the Bible such a fascinating book to read is its uncanny ability to continue to surprise us at every turn of its narrative of the long history of salvation. When the fullest of time has come for God to reveal Himself to the world in the most definitive way, He chooses not to show up authoritatively – the way He appeared to Abraham, as three men standing at the entrance of his tent (Gen 18:1-10); or present Himself mysteriously - to Moses “in fire flaming out of a bush” (Ex 3:2-3); or exhibit His omnipotence terrifyingly - to Israel in “peals of thunder and lightning…and a very loud trumpet blast” on Mount Sinai (Ex 19:16). In the most unexpected and self-deprecating manner, He chooses to manifest Himself in a powerless and defenseless infant, “born of a woman, born under the law”, “laid in a manger because there was no room for them in the inn” (Gal 4:4, Lk 2:7).

I don’t know about you. For me, the Nativity is not only a timeless and beautiful story, but also the most shocking twist and turn in all of human history. One that the most nerve-wrecking suspense from a Hitchcock movie cannot even come close in comparison. St Paul says every knee should bend at the name of Jesus (Phil 2:10). I say every human jaw should drop to the floor in reflecting on the Nativity!

The surprises are indeed many. Chief among them is the profound mystery of Christ’s incarnation. Who would have thought that of all the ways that God could have used to come to us, He would choose to allow Himself to be restricted by His own creations – space, time, and the human nature? Who would have imagined that the almighty God would put Himself in harm’s way by plunging deep into the undercurrents of human history? Who would have predicted – other than God Himself through His prophets – that He would come into this world through a virgin birth, and make Himself known to the world as a powerless infant in the little town of Bethlehem (cf. Is 7:14, Micah 5:1)?

“And the Word became flesh and made his dwelling among us”, John proclaims the mystery joyfully in the prologue to his Gospel. “The Son of God became the Son of Man so that the sons of men could become the sons of God.” Like everyone else, St. Athanasius’ struggled mightily to understand such a profound mystery, but this definition he coined goes down in history as one that inspires countless theologians, clergy, and laity alike. Christ came not only to redeem us, but also to elevate our human nature to lofty heights unimaginable by any human mind. In so doing, he enables us to partake of God’s divinity, making us the children of God (2 Peter 4:4)! “See what love the Father has bestowed on us that we may be called the children of God. Yet so we are” (1 Jn 3:1)! Dumfounded and in disbelief, John can find no other words to express his amazement.

This has been a powerful reflection on the Epiphany of the Lord. But the jaw-dropping surprise doesn’t stop there. The theme of all three Mass readings is the universality of God’s saving grace. A universality that manifests itself in Jerusalem’s distant future, when “nations shall walk by your light”; when “your sons [shall] come from afar”; when “the wealth of nations shall be brought to you” (Is. 60:3-5).

To St. Paul and the Jews, whose understanding of salvation has been restricted by God’s progressing pedagogy in the Old Testament to mean “salvation for Israel only”, the revelation of the mystery of universal salvation is a very big deal; or, shall we say, another jaw-dropping surprise. It’s a secret that “was not made known to human beings in other generations as it has now been revealed to his holy apostles and prophets by the Spirit, that the Gentiles are coheirs, members of the same body, and copartners in the promise in Christ Jesus through the gospel”. (Eph 3:5-6). When the Magi come to pay homage to the powerless infant in the manger, the time has finally come for the secret to turn into a reality, for Jerusalem to take the center stage in world history, and for Daughter Zion to become the Bride of Christ – the Catholic Church.