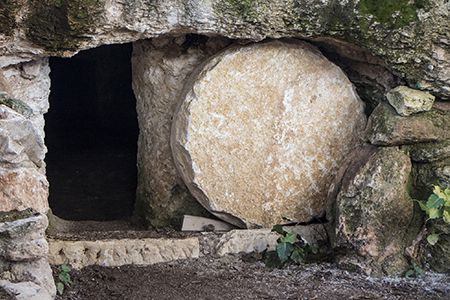 The Resurrection of the Lord

Acts 10:34A, 37-43
Peter proceeded to speak and said: “You know what has happened all over Judea, beginning in Galilee after the baptism that John preached, how God anointed Jesus of Nazareth with the Holy Spirit and power. He went about doing good and healing all those oppressed by the devil, for God was with him. We are witnesses of all that he did both in the country of the Jews and in Jerusalem. They put him to death by hanging him on a tree. This man God raised on the third day and granted that he be visible, not to all the people, but to us, the witnesses chosen by God in advance, who ate and drank with him after he rose from the dead. He commissioned us to preach to the people and testify that he is the one appointed by God as judge of the living and the dead. To him all the prophets bear witness, that everyone who believes in him will receive forgiveness of sins through his name.”

Colossians 3:1-4
Brothers and sisters: If then you were raised with Christ, seek what is above, where Christ is seated at the right hand of God. Think of what is above, not of what is on earth. For you have died, and your life is hidden with Christ in God. When Christ your life appears, then you too will appear with him in glory.

Many years ago, I was puzzled by the mystery of the Incarnation, not of its credibility, but the manner in which Jesus became man. It was later I learned that God chooses to come to us in silence, humility and hardships. But then, a bigger puzzle follows - the mystery of the Resurrection. If salvation is to be attained through the way of the Cross and that Jesus has accomplished it, then His resurrection should now be in clamour, grandeur and excitement. After all, it is only fair to show those who maltreated Jesus that they were wrong. And would it be much easier and more effective if Jesus were to rise from the tomb in a spectacular way, so that all peoples could see and be convinced that He is truly God?

Yet all four canonical gospels report Jesus' resurrection in a rather “disappointing” way. “Disappointing” in the sense that they are all post resurrection reports. The actual resurrection has already taken place unknowingly. Compared with other similar accounts like the raising of the son of the widow of Nain (rf Lk 7:11-17), the daughter of Jairus (rf Mk 5:35-43) and Lazarus (rf Jn 11:1-44), Jesus' resurrection is anything but exhilarating. Consider the time of discovery, it is early in the morning which is the most quiet time of the day. Consider the number of witnesses, it is only a woman (rf Jn 20:1) or women (rf Lk 24:1, Mk 16:1, Mt 28:1). Even though Matthew whose apocalyptic language (earthquake, lightning, dazzling white clothes) gives some commotion to the resurrection event, it is only an addition of some guards. Consider the ocular proof, only an empty tomb and some burial wrappings (rf Jn 20:5, Lk 24:12). Consider the reactions of the witness(es), presumption of a tomb robbery (rf Jn 20:2, 13-14), fear (rf Lk 24:5, Mk 16:5-6) and disobedience (rf Mk 16:8). If the resurrection of Jesus is the culmination of His Paschal Mystery, why does it happen in this way?

The resurrection of Jesus is a mystery. It is a mystery because it “was about breaking out into an entirely new form of life . . . a life that opens up a new dimension of human existence” (Pope Benedict XVI, Jesus of Nazareth Part Two Holy Week p 244). Unlike those individuals who were revived and then eventually died, Jesus' resurrection is a completely new and unprecedented reality which surpasses our knowledge and experiences. Therefore it cannot be understood by our limited capability, let alone to use science as the normative criterion for proving its authenticity. It has to be approached through the lens of faith. And if it is a matter of faith, then freedom is given. We have a choice to believe or not. We can choose to be like the disciples, refusing to believe (rf Mk 16:11, Lk 24:11), or like Peter, bewildered and went away (rf Lk 24:12) or like John “who saw [the linen cloths and the folded handkerchief] and believe” (Jn 20:8).

Just like the Incarnation, “the Resurrection has entered the world only through certain mysterious appearances to the chosen few” (Pope Benedict XVI, Jesus of Nazareth Part Two Holy Week p 247). The chosen few who are initially frightened, hesitant and doubtful, now fearlessly testified that Jesus Christ was truly risen. They, too, have “resurrected” with Jesus in the sense that they have risen from spiritual death to new life. Yes, Jesus' resurrection happened quietly and cannot be thoroughly proven, yet the testimony which the witnesses bore was so powerful that the Christian faith stands or falls with its truth (rf Pope Benedict XVI, Jesus of Nazareth Part Two Holy Week p 241). How about us? Have we “resurrected” as well? Does Jesus' resurrection continue in us? Our own “resurrection” can also take place quietly in our heart and in our way of life, and the witness that we bear can be as powerful as those chosen few.