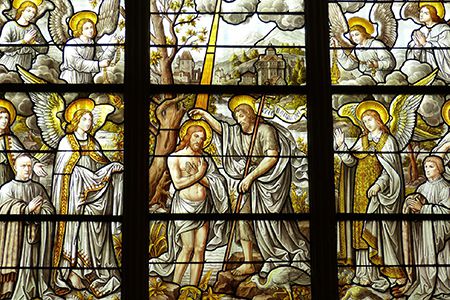 Solemnity of the Nativity of Saint John the Baptist

Isaiah 49:1-6
Hear me, O coastlands, listen, O distant peoples. The LORD called me from birth, from my mother's womb he gave me my name. He made of me a sharp-edged sword and concealed me in the shadow of his arm. He made me a polished arrow, in his quiver he hid me. You are my servant, he said to me, Israel, through whom I show my glory. Though I thought I had toiled in vain, and for nothing, uselessly, spent my strength, yet my reward is with the LORD, my recompense is with my God. For now the LORD has spoken who formed me as his servant from the womb, that Jacob may be brought back to him and Israel gathered to him; and I am made glorious in the sight of the LORD, and my God is now my strength! It is too little, he says, for you to be my servant, to raise up the tribes of Jacob, and restore the survivors of Israel; I will make you a light to the nations, that my salvation may reach to the ends of the earth.

Acts 13:22-26
In those days, Paul said: "God raised up David as king; of him God testified, I have found David, son of Jesse, a man after my own heart; he will carry out my every wish. From this man's descendants God, according to his promise, has brought to Israel a savior, Jesus. John heralded his coming by proclaiming a baptism of repentance to all the people of Israel; and as John was completing his course, he would say, 'What do you suppose that I am? I am not he. Behold, one is coming after me; I am not worthy to unfasten the sandals of his feet.' "My brothers, sons of the family of Abraham, and those others among you who are God-fearing, to us this word of salvation has been sent."

Luke 1:57-66,80
When the time arrived for Elizabeth to have her child she gave birth to a son. Her neighbors and relatives heard that the Lord had shown his great mercy toward her, and they rejoiced with her. When they came on the eighth day to circumcise the child, they were going to call him Zechariah after his father, but his mother said in reply, "No. He will be called John." But they answered her, "There is no one among your relatives who has this name." So they made signs, asking his father what he wished him to be called. He asked for a tablet and wrote, "John is his name," and all were amazed. Immediately his mouth was opened, his tongue freed, and he spoke blessing God. Then fear came upon all their neighbors, and all these matters were discussed throughout the hill country of Judea. All who heard these things took them to heart, saying, "What, then, will this child be?" For surely the hand of the Lord was with him. The child grew and became strong in spirit, and he was in the desert until the day of his manifestation to Israel.

The word “prophet” refers to someone who is “chosen to speak for God” (Dictionary.com). This week’s readings highlight three very different individuals, namely Isaiah, David, and John the Baptist; all lead the way to the Son of God, Christ our Saviour. Though each person is chosen to bear witness during unique times of cultural, social and political uncertainties, their stories reveal the depth and width of God’s love for humanity as well as the splendour of God’s salvific plan. God’s invitation to each is simultaneously intimate, profound, and reassuring. Indeed, through baptism, we are also called to be prophets as these Old Testament figures were called.

Despite of what the world tells us, we are loved, valued, and treasured. Our dignity is firmly rooted in God. Genuine validation can only and directly come from our Creator God who forms us in the womb and knows us before we were born. God knows us deeply in ways only God is capable. The Psalmist exalts, “I praise you, for I am [...] wonderfully made” (Ps 139:14). Indeed, each of us is “wonderfully made” in the image of God: “The divine image is present in every man. It shines forth in the communion of persons, in the likeness of the unity of the divine persons among themselves” (CCC 1702). Therefore, it is not surprising that God positions us in unique life’s circumstances, endows us with a variety of gifts, invites us to be His voice, and definitely wants to include us in His grand salvific plan.

God calls His people with great intimacy. In the First Reading, Isaiah recognizes how intimately God loves and knows him, “The Lord called me before I was born, while I was in my mother’s womb he named me” (Is 49:1). In the same way, God intentionally “found” David, “son of Jesse”; “a man after [God’s] own heart, who will carry out all [His] wishes” (Acts 13:22). In the Gospel of Luke, God names His prophet, the child to be born to Zechariah and Elizabeth: “you will name him John” (Lk 1:13). Indeed, God knows us more intimately and deeply than we know ourselves.

God’s call is profound and reveals His salvific plan out of the depth of His infinite love. God calls Isaiah His “servant … in whom I will be glorified” (Is 49:3). Isaiah is to be “given as a light to the nations, that [God’s] salvation may reach to the end of the earth”; and is called “to bring Jacob back […] to restore the survivors of Israel” (Is 49:5-6). David is called not only to lead a nation but more importantly to bring forth the Saviour: “Of this man’s posterity God has brought to Israel a Saviour, Jesus, as he promised” (Acts 13:23). Similarly, God chooses John the Baptist whose birth provokes “fear” among the neighbours, and “All who heard them pondered them and said, ‘What then will this child become?’” (Lk 1:66). Indeed, beyond human wisdom, John the Baptist would become the greatest prophet: “among those born of women no one has arisen greater than John the Baptist; yet the least in the kingdom of heaven is greater than he”, Jesus explains (Mt 11:11). He is the greatest because he is the precursor of Christ; the smallest because he is not the Messiah, “but the one is coming after me; I am not worthy to untie the thong of the sandals on his feet” (Acts 13:25). Each of these individuals are called to point the way to the Messiah and Saviour.

Most of all, God’s call is always reassuring. God never dismisses His prophets with “Okay, off you go buddy, bon voyage and good luck!” Isaiah explains how God has tenderly equipped him: “He made my mouth like a sharp sword, in the shadow of his hand he hid me; he made me a polished arrow, in his quiver he hid me away” (Is 49:2). His faith assures him that God will always walk with him as he exclaims, “my God has become my strength” (Is 49:5). After David is anointed by Samuel, God journeys with him through many life-threatening challenges, such as the battle against Goliath the Philistine and Saul’s jealousy (ref. 1Sam 16, 17). Finally, John the Baptist is given time to grow in wisdom and strength before his public ministry: “The child grew and became strong in spirit, and he was in the wilderness until the day he appeared publicly to Israel” (Lk 1:80). Indeed, Isaiah, David, and John the Baptist are all “polished arrow[s]”, ready to be dispersed at God’s command. So, are we ready for this prophetic mission?

Bishop Robert Barron explains that we are all called to be prophets through baptism.

A person is a prophet in the measure that he or she bears the truth of God. G.K. Chesterton said that in an upside-down world such as ours, the prophet is the one who stands on his head so that he might see things aright.
(Bishop Robert Barron, “Priests, Prophets, Kings”. WordOnFire, Wofdigital.org. https://www.wordonfire.org/resources/article/priests-prophets-kings/477/. Accessed May 17, 2018).

One may consider the call to speak for God is extraordinary; however, God chooses each of us according to His will to be His voice in this world. Like Isaiah, David, and John, God has prepared us for the unique mission to which we are called. When the world turns away from the light, we must be the voice of hope. At times, like Bishop Barron explains, we have to stand on our head “to see things aright”!