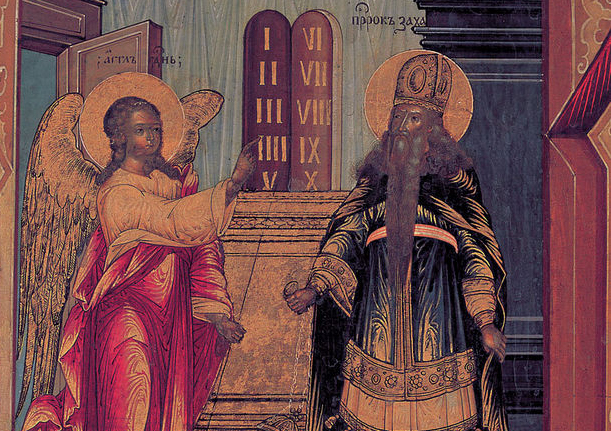 In the days of Herod, King of Judea, there was a priest named Zechariah of the priestly division of Abijah; his wife was from the daughters of Aaron, and her name was Elizabeth. Both were righteous in the eyes of God, observing all the commandments and ordinances of the Lord blamelessly. But they had no child, because Elizabeth was barren and both were advanced in years.

Once when he was serving as priest in his division's turn before God, according to the practice of the priestly service, he was chosen by lot to enter the sanctuary of the Lord to burn incense. Then, when the whole assembly of the people was praying outside at the hour of the incense offering, the angel of the Lord appeared to him, standing at the right of the altar of incense. Zechariah was troubled by what he saw, and fear came upon him.

But the angel said to him, “Do not be afraid, Zechariah, because your prayer has been heard. Your wife Elizabeth will bear you a son, and you shall name him John. And you will have joy and gladness, and many will rejoice at his birth, for he will be great in the sight of the Lord. He will drink neither wine nor strong drink. He will be filled with the Holy Spirit even from his mother's womb, and he will turn many of the children of Israel to the Lord their God. He will go before him in the spirit and power of Elijah to turn the hearts of fathers toward children and the disobedient to the understanding of the righteous, to prepare a people fit for the Lord.”

Then Zechariah said to the angel, “How shall I know this? For I am an old man, and my wife is advanced in years.” And the angel said to him in reply, “I am Gabriel, who stand before God. I was sent to speak to you and to announce to you this good news. But now you will be speechless and unable to talk until the day these things take place, because you did not believe my words, which will be fulfilled at their proper time.” Meanwhile the people were waiting for Zechariah and were amazed that he stayed so long in the sanctuary. But when he came out, he was unable to speak to them, and they realized that he had seen a vision in the sanctuary. He was gesturing to them but remained mute.

Then, when his days of ministry were completed, he went home.

After this time his wife Elizabeth conceived, and she went into seclusion for five months, saying, “So has the Lord done for me at a time when he has seen fit to take away my disgrace before others.”

When Zechariah entered into the temple to offer up prayers to God for all men, interceding between God and man, he saw an angel standing within. The justest of men can not behold an angel without fear; Zechariah therefore, not sustaining the sight of the angel's presence, nor able to withstand his brightness, is troubled.

The angel not only soothes his fears, but gladdens him with good tidings, adding, "For your prayer is heard, and your wife Elizabeth shall bear a son."

Considering his own age, and the barrenness of his wife, Zechariah doubted; as it is said, "And Zechariah said to the angel, Whereby shall I know this?" And he adds the reason of his doubting; "For I am an old man." But this is something unforgivable in a priest, that he raises a course of objections; for whenever God declares any thing, we should receive it in faith, and moreover, disputes of this kind are the mark of a rebellious spirit.

But Gabriel gives Zechariah the sign which he asks for, that he who spoke in unbelief, might now by silence learn to believe; as it follows; "and, behold, you shall be dumb."

But mark the mercy of God in what follows: "Until the day in which these things shall be performed." As if he said, "When by the issues of events I shall have proved my words, and you shall perceive that you are lightly punished, I will remove the punishment from you." And he points out the cause of the punishment, adding, "Because you believe not my words, which shall be fulfilled in their season;" not considering His power Who sent me, and before Whom I stand. But if one who was incredulous about the mortal birth of John the Baptist is punished how shall one who speaks falsely of the heavenly and unspeakable birth of Christ escape vengeance?

These things were done in the month of September, the twenty-second day of the month, upon which the Jews were bound by Law to observe the feast of the Tabernacles, just before the equinox, at which the night began to be longer than the day, because Christ must increase, but John must decrease And those days of fasting were not without their meaning; for by the mouth of John, repentance and mortification were to be preached to men.