Workers in the Vineyard 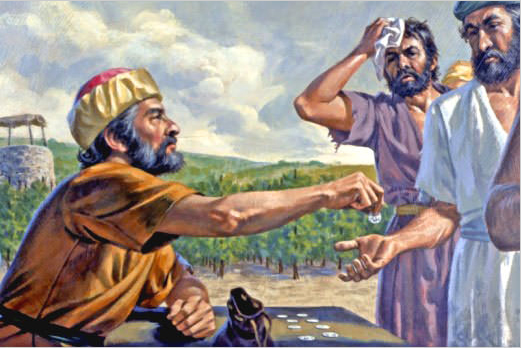 Jesus told his disciples this parable: “The Kingdom of heaven is like a landowner who went out at dawn to hire laborers for his vineyard. After agreeing with them for the usual daily wage, he sent them into his vineyard. Going out about nine o'clock, he saw others standing idle in the marketplace, and he said to them, ‘You too go into my vineyard, and I will give you what is just.' So they went off. And he went out again around noon, and around three o'clock, and did likewise. Going out about five o'clock, he found others standing around, and said to them, ‘Why do you stand here idle all day?' They answered, ‘Because no one has hired us.' He said to them, ‘You too go into my vineyard.' When it was evening the owner of the vineyard said to his foreman, ‘Summon the laborers and give them their pay, beginning with the last and ending with the first.' When those who had started about five o'clock came, each received the usual daily wage. So when the first came, they thought that they would receive more, but each of them also got the usual wage. And on receiving it they grumbled against the landowner, saying, ‘These last ones worked only one hour, and you have made them equal to us, who bore the day's burden and the heat.' He said to one of them in reply, ‘My friend, I am not cheating you. Did you not agree with me for the usual daily wage? Take what is yours and go. What if I wish to give this last one the same as you? Or am I not free to do as I wish with my own money? Are you envious because I am generous?' Thus, the last will be first, and the first will be last.”
Matthew 20:1-16
There are many come to the faith, yet but few arrive at the heavenly kingdom; many follow God in words, but ignore Him in their daily lives. Immediately two things come to mind. The first, that none should presume concerning himself; for though he be called to the faith, he knows not whether he shall be chosen to the kingdom. Secondly, that none should despair of his neighbor, even though he see him lying in vices; because he knows not the riches of God's mercy.

The morning is our childhood; the third hour may be understood as our youth, the sun as it were mounting to his height is the advance of the heat of age; the sixth hour is manhood, when the sun is steady in his meridian height, representing as it were the maturity of strength; by the ninth is understood old age, in which the sun descends from his vertical height, as our age falls away from the fervor of youth; the eleventh hour is that age which is called decrepit, and doting.

They then who have neglected till extreme old age to live to God, have stood idle to the eleventh hour, yet even these the master of the household calls, and oftentimes gives them their reward before other, inasmuch as they depart out of the body into the kingdom before those that seemed to be called in their childhood.

When He says, The first shall be last, and the last first, He alludes secretly to such as were at the first eminent, and afterwards showed no virtue; and to others who have been reclaimed from wickedness, and have surpassed many. So that this parable was made to quicken the zeal of those who are converted in extreme old age, that they should not suppose that they shall have less than others.