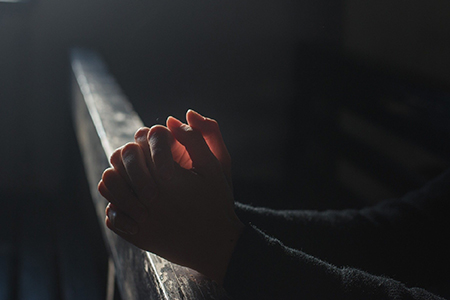 Isaiah 53:10 - 11
The LORD was pleased to crush him in infirmity. If he gives his life as an offering for sin, he shall see his descendants in a long life, and the will of the LORD shall be accomplished through him. Because of his affliction he shall see the light in fullness of days; through his suffering, my servant shall justify many, and their guilt he shall bear.

Hebrews 4:14 - 16
Brothers and sisters: Since we have a great high priest who has passed through the heavens, Jesus, the Son of God, let us hold fast to our confession. For we do not have a high priest who is unable to sympathize with our weaknesses, but one who has similarly been tested in every way, yet without sin. So let us confidently approach the throne of grace to receive mercy and to find grace for timely help.

Mark 10:35 - 45
James and John, the sons of Zebedee, came to Jesus and said to him, "Teacher, we want you to do for us whatever we ask of you." He replied, "What do you wish me to do for you?" They answered him, "Grant that in your glory we may sit one at your right and the other at your left." Jesus said to them, "You do not know what you are asking. Can you drink the cup that I drink or be baptized with the baptism with which I am baptized?" They said to him, "We can." Jesus said to them, "The cup that I drink, you will drink, and with the baptism with which I am baptized, you will be baptized; but to sit at my right or at my left is not mine to give but is for those for whom it has been prepared." When the ten heard this, they became indignant at James and John. Jesus summoned them and said to them, "You know that those who are recognized as rulers over the Gentiles lord it over them, and their great ones make their authority over them felt. But it shall not be so among you. Rather, whoever wishes to be great among you will be your servant; whoever wishes to be first among you will be the slave of all. For the Son of Man did not come to be served but to serve and to give his life as a ransom for many."

By this time in his ministry, Jesus has foretold three times his own Death and Resurrection to the apostles. The last prediction is the most detailed, specifying that his death will result from a conspiracy of the Jewish and Roman authorities, “… we are going up to Jerusalem, and the Son of Man will be given over to the chief priests and the teachers of the Law. They will condemn him to death and hand him over to the foreigners who will make fun of him, spit on him, scourge him and finally kill him; but three days later he will rise” (Mk 10:34-35, Ref. Ignatius Catholic Study Bible New Testament P. 85).

When Jesus explains this to the Apostles, they are on their way to Jerusalem, yet the Apostles do not understand Jesus’ prediction nor relate it to their journey. In this week’s gospel reading, we hear James and John voicing their ambitions and asking Jesus to let them sit on his right and his left, “in [his] glory” (10:37). Although Jesus responded, “You do not know what you are asking”, James and John courageously promised Jesus that they would drink the cup that he drinks, the cup filled for sinners despite his innocence and purity (10:38, Ref. Ignatius Catholic Study Bible New Testament P. 85). They asserted their willingness to be baptized “in the way [Jesus] is baptized”, which symbolizes one’s immersion in trial and suffering. Eventually James and John did share in Jesus’ cup and baptism when they suffered persecution in the early Church. James was martyred, “[King Herod] had James, the brother of John, killed with the sword” (Acts 12:2). John was exiled, “I, John, your brother, who share with you, in Jesus, the sufferings … was on the island of Patmos, because of the Word of God and witnessing to Jesus” (Rev: 1:9). They did accomplish what they promised Jesus, maybe far beyond what they could imagine when they put their request to Jesus. Indeed, “[they] do not know what [they] are asking”(10:38).

The ambitions expressed by James and John lead Jesus to explain to the Apostles the true nature of Christian leadership. His disciples are not to imitate the tyranny of the Gentile rulers but to follow Jesus’ example of humility and service, “whoever wishes to be first among you must be slave of all” (10: 44). Christ has come “to give his life as a ransom for many”, by the price of his life, God has paid for the release of his people from slavery in sin (10:45). Christ’s saving death, thus, ransomed us for freedom and fellowship in the family of God (Ref. ICSB NT P. 85).

St. Paul in the second reading proclaims that Christ, the Son of God, is now in the most intimate presence of God in heaven. Having triumphed over temptation as a man, he understands our struggles, sympathizes with our weaknesses and is able to help us through them (Ref. Heb 4:14-16, ICSB NT P. 421, CCC 2602). When we pray and ask God, we must “approach the throne of grace with boldness”, it is here “we may receive mercy and find grace to help in time of need” (Heb 4:16).