Being Healed of Passivity 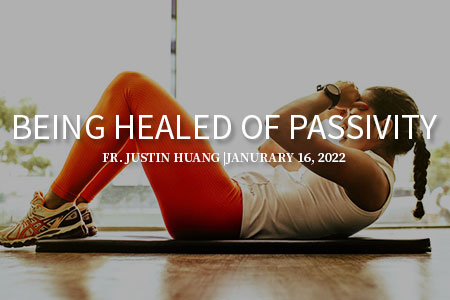 The point of today’s homily is that the Father wants us to become more active as persons, because we tend towards passivity.  We want a better life, but we want it in the easiest way possible.  Most people want to be in better shape, but without pain.  That’s why they sell those ab machines—if we just roll in them, then we’ll lose weight.  We want to overcome our sins, but we do the minimum to accomplish it.  We all tend towards passivity.

Think about where the Holy Spirit has put desires in our hearts for this upcoming year.  Are we going to do the maximum to accomplish these things?  Let’s look at the example of our mother’s being active in the Gospel: “On the third day there was a wedding in Cana of Galilee, and the mother of Jesus was there.  Jesus and his disciples had also been invited to the wedding” (Jn 2:1-2).  It’s very interesting that St. John tells us that she’s there, but that Jesus is ‘also’ invited.

The story is about Him, but she’s the one who takes the initiative.  “When the wine gave out, the mother of Jesus said to him, ‘They have no wine’” (2:3).  We’ve mentioned before, in this culture, having no wine during a wedding would be socially very embarrassing.  The key for us is how our mother notices someone’s need and takes action.

How often do we see needs in our lives and don’t take action?  We say to people that things are bad in society, and we complain about them, but do we do anything?  We see there’s a problem in our family, but do we really do something?  Do we really pray about the needs we see in people’s lives?  I’m talking about praying so hard and long that you actually change your life to make it better.

In terms of our new year’s resolutions, are you writing them down, asking people to hold you accountable, changing your schedule, and spending money to do it?

So, on one hand, it seems as if Jesus is refusing our mother’s request, but, on the other hand, He later grants her request, by changing water into wine!  St. John later writes, “Jesus did this, the first of his signs, in Cana of Galilee, and revealed his glory” (2:11).  So, Jesus’ first miracle is done because of our mother’s initiative.  In fact, He did it because of her.

This brings us to a theological idea called self-creative freedom.  The Father intends for us to cooperate with Him in creating our future; we’re not just passively responding, but actively creating (Luke Burgis & Joshua Miller, Unrepeatable, 196-197).  And when we move, He responds to us.

A man who was struggling with what to do in his life, liked an image I shared with him.  I said, “The Holy Spirit can only blow the sails of your ship when you put up the sails.”  I made this remark because his problem was that he really struggled to make decisions.  He wanted to know God’s plan and have confirmation of it before he started moving.  What I suggested was that he start moving, and then God would direct him, because this was a sign of trust in God, and it’s also the mature, adult path: Sometimes you have to make a decision in uncertainty.

This doesn’t mean that you make every decision in uncertainty, and self-creative freedom is not an excuse to choose sinful actions.  This example just means that sometimes you have to get the ball rolling because you’re paralyzed in inaction.

Yes, you have to think through decisions.  But once the preponderance of evidence tells you to move, then move.  However, if the evidence suggests waiting, then wait.

Here are some simple tests: Do you have the ability to make decisions once you know you should?  Can you be decisive?  Or do you hesitate endlessly?  And are you growing spiritually, emotionally, humanly, physically?  If you’re not, you may not be active enough.

The Father has given us the power of agency, meaning you can choose and act freely.  He doesn’t save us without ourselves.  And our mother is a doer.  She goes to Jesus with the needs of the couple, asking Him to act.  She got the ball rolling, and Jesus cooperated with her!

That’s part of the perfect humility of God: Not only do we cooperate with Him, but He cooperates with us!  That’s why often in the Gospels, Jesus asks people what they want!  And why St. Matthew tells us that Jesus could do no miracles in His home town because of people’s lack of faith.

Saints are never passive.  In fact, to become a saint requires actuation and cooperation with the Holy Spirit to the highest degree.  Many of us want to become saints, so this means growing in our ability to act boldly, and take risks for Him.

In philosophy, there’s an idea that describes God as pure act, in other words, He’s always acting; God has no potentiality in Him.  The Trinity is always loving, giving, and receiving.  And so we mirror God’s perfection when we act.

The Father allowed there to be no wine at the wedding so that our mother would act.  He allows our lives to be filled with problems so that we will act.  He’s not interested in our staying like children and having everything done for us.  He’s interested in our perfection.

That makes so much sense to me!  You know, I thought Jesus would heal me of my problems, let’s say, my sleep problems, with less effort.  I thought all I’d have to do was make a few changes.  But this Gospel reminds me that He wants to heal me of my passivity.

Whatever the Holy Spirit wants you to do, go do it!  For some of us, we’ve prayed enough about something, now’s the time to go do it.  But, for others, prayer could be a great start, because prayer isn’t just passive, it’s also active.  If you see a need, take it to Jesus, and ask Him intensely, over and over.  As you do, you’ll get stronger in your willpower to cooperate with Him and do what He wants.

Our mother says to the servants, “Do whatever he tells you” (2:5).  Sometimes Jesus performs miracles, sometimes He doesn’t.  But the greater miracle is that we’re growing in perfection.

Many of you told me that you were encouraged by the homily about weaknesses becoming strengths, where Bryan overcame his problems to such a degree that he was so mature that he was able to help me, his priest.

One thing I wanted to tell you is that I look forward to the day when all of you will become so humanly and spiritually mature that you will help me.  You will have grown so much by consistently taking action that you’ll be ready for sainthood.