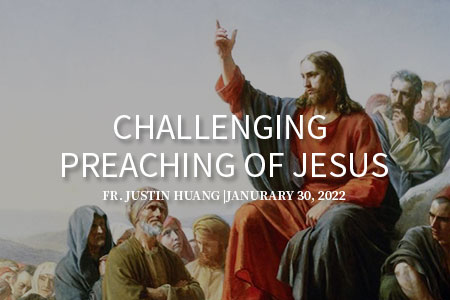 “When they heard this, all in the synagogue were filled with rage.  They got up, drove Jesus out of the town, and led him to the brow of the hill on which their town was built, so that they might hurl him off the cliff” (Lk 4:28-29).  Jesus’ first homily is so challenging to His home community that they want to kill Him, and it reminds us that, if we’re going to be Christians, we’re going to speak the truth with love, but people will still be so angry that they’ll want to hurt us.

For the past two months, we’ve had very encouraging homilies: Four homilies in December about consolation and desolation; the Father’s transforming our weaknesses into strengths; some about humility, intimacy, and three hope-filled homilies to prepare for the new year!  Now it’s time for a month of challenges, starting today, and for all of February, we’ll have our annual pro-life season, which will be deliberately challenging, because, if it isn’t, we’re not preaching Jesus.

The First Reading and the Gospel are about being a prophet, and we remember that a prophet in the Bible is not primarily someone who predicts the future, but who speaks God’s word.  Jeremiah writes, “The word of the Lord came to me saying, ‘Before I formed you in the womb I knew you, and before you were born I consecrated you; I appointed you a Prophet to the nations” (Jer 1:4-5).  Every Christian is called by God to speak His truth and love, and our calling begins in God’s mind before we were created.  That’s why we’re going to speak about pro-life in the next month.  This is our mission.

“Therefore, gird up your loins; stand up and tell the people everything that I command you.  Do not break down before them, or I will break you before them.  And I for my part have made you today a fortified city, an iron pillar, and a bronze wall, against the whole land…  They will fight against you; but they shall not prevail against you, for I am with you, says the Lord, to deliver you” (17-19).  The Father always speaks the truth to us.  The question is: Will we speak the truth to each other?  We all have fear and we censor ourselves (For me, it always used to be that it was never a good time to talk about the Church’s teaching on sexuality.  And I wondered how to present it when it would hurt some sincere people), and when we do, we sell our souls, figuratively speaking.  We separate ourselves from the Father—that’s what it means when He says to us, ‘I will break you before them.’  But, if we choose to speak the truth, He will strengthen us.  We’ll still suffer, but won’t be overcome.

I love what Dave Rubin says.  Remember Dave?  He’s the gay atheist who speaks a lot of truths and has more courage than most Catholics.  He says, “Once you get past your first mobbing, you’ll be okay”.

In the Gospel, Jesus tells the people in the synagogue that God’s blessings aren’t going to them, but to the non-Jewish Gentiles.  He says, “The truth is, there were many widows in Israel in the time of Elijah, when the heaven was shut up three years and six months, and there was a severe famine over all the land; yet Elijah was sent to none of them except to a widow at Zarephath in Sidon” (Lk 4:).  One scholar notes that Jesus’ audience were good Jews, and they felt they were special; they followed popular beliefs at the time which said that God’s blessings were for them alone, even though that’s not what the Scriptures taught.  Their other problem was that they had no faith in Jesus.

And those are our two great problems: When it comes to choosing either Jesus’ philosophy or the world’s, we’re tempted to follow the world’s.  For us, the greatest threat to our faith is following popular thought and culture.  Conforming behaviour is part of the human condition (Luke Burgis & Joshua Miller, Unrepeatable, 33); we want to be liked, to fit in, to be accepted—we can’t escape this.  The question is: To whom are we going to conform?

So, today, I’m going to focus on three principles of Jesus that contradict what our culture believes.

1) Spiritual health is more important than physical health.  Jesus says, “Do not fear those who kill the body but cannot kill the soul; rather fear him who can destroy both soul and body in hell” (Mt 10:28).  We’ve mentioned this before, but many of you still talk about how COVID is the worst thing right now.  That may make sense if you’re not Christian.  But, if we follow Jesus’ teaching, then isn’t eternal death worse than physical death?

Let’s be clear, I’m not saying be physically reckless or take unnecessary risks with your body or health.  What Jesus is telling us is not to fear COVID—it might be hard, but could we at least try?  One simple way to do this is to stop talking about it, unless there’s a real reason.  Jesus is telling us to fear sin more than sickness.

St. Dominic Savio had a motto, “Death rather than sin.”  Does this make sense?  Remember we’re talking about principles here.  Parents do all sorts of things to protect their children from COVID, but don’t do as much when it comes to sin.  For example, we should be more afraid of pornography for our children than COVID.  I hear the silliest things said, “Well, if you don’t have your health, what do you have?”  Your character, your soul, your virtue?

Once we fall in love with Jesus, we’d rather die than commit even one venial sin, because sin has eternal consequences, whereas COVID has temporary consequences.  Even death’s effects are temporary, because the soul is eternal and we’ll all get new bodies, whether in heaven or hell.

2) Second Principle: When our loved ones die, the vast, vast, vast majority of them do not go to heaven, but we hope to purgatory.  This goes against what everyone says, “Now they’re in a better place,” meaning heaven.  According to the Bible, there are only three possibilities when we die: We go to hell, purgatory, or heaven.  Now, since we can’t judge people’s souls, we hope no one goes to hell, but Revelation says, “Nothing unclean shall enter it” (21:27), referring to heaven.  It’s been the teaching of the Church for centuries that only saints go to heaven.  That’s why we need purgatory.

When my dad, grandmothers, and all the priests I know died, I didn’t assume any of them went straight to heaven.  They were far from saints.  I don’t assume I’ll go to heaven.  So, permit me to be more direct: Your adult loved ones who have died probably didn’t go to heaven directly.  We hope they went to purgatory, and that’s not bad because they will eventually be purified and go to heaven.

This falsehood that our loved ones have gone straight to heaven has led to a greater disease than COVID, the disease of spiritual mediocrity, which has eternal repercussions.  Because most Catholics today think they’re going straight to heaven, they slack off and don’t put all their heart into becoming saints.

Let’s go back to Jesus’ words, “The gate is wide and the way is easy, that leads to destruction, and those who enter by it are many.  For the gate is narrow and the way is hard, that leads to life, and those who find it are few” (Mt 7:13-14).  Let’s just clarify these words: Jesus is saying that most people choose hell because it’s easy.  But the way of perfection, of loving Him above all things, of loving the way He loves, is hard, and few choose it.

If we want to say our parents and grandparents all went straight to heaven, not only is this false, this harms the next generation, because they now assume that to get to heaven is easy, and so they never try.  We make ourselves feel good about the past generation and hurt future generations.

3) Third principle: Sunday Mass is a grave moral obligation for Catholics.  Jesus died for us, and before He did, He said, “Do this in remembrance of me”.  He also said, “Truly, truly, I say to you, unless you eat the flesh of the Son of man and drink his blood, you have no life in you” (Jn 6:53).  We’ve talked about this for years.  I’ve tried the soft approach, and then the more direct approach.  I’m not here to force you.  I’m just here to point out Jesus’ principles.

Two points I want to make: As your pastor, I’m not here to make you feel good, I’m here to make you better.  I want you to feel good, but not at the expense of letting you sin.  I’m starting to have doubt whether everyone’s trying their best in coming to Sunday Mass.  I’m not talking about those of you who try sincerely and struggle; you never make excuses, and so I know you’re sincere.  I’m not worried if you missed Mass if you were sick—that’s a legitimate excuse.  I’m talking about those of you who make excuses and don’t seem to take it seriously enough.  You come to Mass, and then tell me that online is an acceptable alternative.  I’m starting to doubt parents who have their children in full schools, but don’t come to Mass.  Have you seen our Saturday night Masses, and 4 p.m. Mass on Sunday?  Do you know how empty they are?  If there’s more to it, please tell me.

I once greeted a mother after Mass, and innocently said, “Great to see you!  I didn’t see you when I was in the sanctuary.”  She said she was there, but I doubted.  So I checked the security cameras, and she showed up five minutes before Mass ended!  And she lied in front of her child!  This story is emblematic of parents skipping Mass and making excuses, which amounts to lying to our children.

Second point: Eventually we’re going to raise the standards here for the Sacraments.  The way we celebrate Confirmation has become a joke, where the Grade 7s skip Mass all year, and then suddenly it’s safe to come for Confirmation—this has happened the past two years and isn’t logical.  Similar things happen with Communion and Baptism.  We need to raise the standards to meet Jesus’ standards.  If we’re going to profess our faith in Jesus at Confirmation, we should at least obey His commandment of going to Mass every single Sunday.

This is good news, because the truth sets us free.  And it’s wonderful that we can speak Jesus’ hard truths the way He did.

For the next four weeks, the pro-life homilies will talk about God’s mercy, but also His truth.  We’re going to turn up the heat even more than previous years, because that’s our mission as prophets.  For those of you who are new, I hope this doesn’t overwhelm you.  We’ve built up to this after years of growth, so I hope you can understand where we are.  Just like last year, we’re going to show photos of abortion, so that the truth is known.  We’ll do this next week, so, parents, I leave it to you if you will allow your children to see these images.  You know better than I.  We’ll do the homily, and then we’ll warn you right before we show them, so you can make the call then.

May Jesus bless us all, and help us to preach and live like Him.