Being Christian in Public 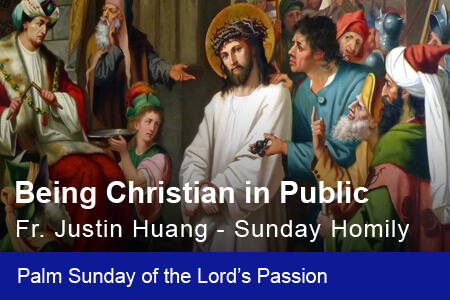 Our final challenge in our Lenten wilderness experience is a call to courage. Most Catholics aren’t courageous about professing their faith in Jesus. We’ve talked many times about our fear of making the sign of the Cross in public, about sharing our Christian opinion with our friends because our stance isn’t popular, about discussing anything religious. We want to fit in above all else, and so we act like we’re not Christian.

When we meditate on the Passion Narrative, we see many denials of Jesus: The disciples run away when Jesus is arrested, the women look on from a distance when Jesus is crucified. That’s the way we want to understand our lack of courage: It’s a denial of Jesus. When we don’t make the sign of the Cross, we’re denying Jesus. When we’re silent about moral issues, we probably don’t realize it nor intend it, but it’s tantamount to loving people more than Jesus.

But, the opposite is also true: By loving and keeping Jesus in mind, we’ll grow in courage.

1) In the beginning of the narrative, there are three responses to Jesus: first, the religious leaders plan to betray Jesus; second, an unnamed woman anoints Jesus in preparation for His burial; third, Judas betrays Jesus. In St. Mark’s Gospel, he often uses this sandwich structure: He puts one story in between two others, so that we focus on the middle story.

In this case, he’s focusing our attention on this woman. According to the people sitting at table with Jesus, she wasted three hundred days’ wages on this. But she’s unfazed by their criticism. Jesus says, “She has done a good thing for me” (Mk 14:6). Whenever we make the sign of the Cross, or state Jesus’ importance in our lives, or what He teaches us, then we do a good thing for Him.

2) At the Last Supper, Jesus announces, “Truly I tell you, one of you will betray me” (14:8), not indicating who it will be. Dr. Mary Healy suggests two reasons for this: first, so that all the disciples search their hearts, recognizing that they each have the capacity to betray Jesus; second, it gives Judas a chance to repent.

Judas would have heard Jesus say, “The Son of Man goes as it is written of him, but woe to that one by whom the Son of Man is betrayed! It would have been better for that one not to have been born” (14:21). This declaration resembles what Jesus said earlier in the Gospel, “Those who are ashamed of me and of my words in this adulterous and sinful generation, of them the Son of Man will also be ashamed when he comes in the glory of his Father with the holy angels” (8:38).

I used to fear making the sign of the Cross in public. But when I thought about Jesus’ being ashamed of me when I die, that motivated me to put Him first. Again, we don’t think of it, but not making the sign of the Cross when we normally would, just because we’re with people who don’t do it, is being ashamed of Jesus. It’s the same dynamic as when we’re ashamed of our parents in front of our friends, or afraid of being seen with a friend who’s not as popular.

3) When Jesus and the apostles go to the Mount of Olives, He predicts, “You will all become deserters; for it is written, ‘I will strike the shepherd, and the sheep will be scattered.’ But after I am raised up, I will chastise and upbraid you for your infidelity” (14:27-28). No, wait. It says, “After I am raised up, I will go before you to Galilee.” It’s likely that we may still offend Jesus and deny Him in small ways. But here He promises the disciples that, even after their betrayal, He will still be with them.

There’s no contradiction between what Jesus said about His being ashamed of us and His forgiving us. It’s true that if we deny Him, we’ll separate ourselves from Him, which is what He means when He says that He’ll be ashamed of us. But there’s still always a chance at forgiveness while we live. St. Peter denies Jesus three times and the way he restored his relationship was to tell Jesus three times that he loved Him.

4) When Jesus finds Peter, James, and John sleeping while He’s praying, He says, “Keep awake and pray that you may not come into temptation” (14:38). ‘Keep awake’ means to be spiritually alert. Are we prepared for the trials that will come? If we’re going to be tested soon, then we better make up our minds about how we’ll respond: No matter what, we will never deny Jesus.

5) The reason why Jesus enters His passion is because He was keeping certain people in mind: first, His Father, and then, us. This is the secret of courage: Keep in mind the Person of Jesus. That’s how Jesus received courage in His human nature: by keeping the Father in mind.

St. Mark is the only one to record that Jesus used the Aramaic word for father: “Abba, Father, for you all things are possible; remove this cup from me; yet, not what I want, but what you want” (14:36). “There is no evidence for anyone prior to Jesus addressing God with this word of daring intimacy… With this term of affection Mark accents the fact that Jesus’ obedience is no mere resignation but an act of unbounded trust, commitment, and love for his Father” (Mary Healy, The Gospel of Mark in Catholic Commentary on Sacred Scripture, 292).

6) We see the sandwich technique another time: first, St. Peter is asked in the courtyard if he’s Jesus’ disciple, then Jesus stands on trial before the Jewish Sanhedrin, and finally St. Peter finally denies Jesus. The focus is on Jesus’ being faithful to His Father, even at the cost of His life. This is how it’s depicted in The Passion of the Christ (https://www.youtube.com/watch?v=7VqgXrxVhwE 0:00-1:25).

Jesus is our model: He’s on trial the way we are. So, like Him, we should stand upright as Christians and never sin; we won’t lie, swear, or deny Jesus because He never denied us.

Remember what St. Paul says, “I live by faith in the Son of God, who loved me and gave himself for me” (Gal 2:20). If we remember that Jesus suffered for us, and was thinking about you and me, then courage comes.

Two weeks ago, on March 9, the Canadian bishops issued some moral guidelines for Catholics about which COVID-19 vaccine to receive. They said, “When provided with a choice between receiving different vaccines, the vaccine with the least connection to abortion-derived cell lines should always be preferred and chosen when possible” (https://www.cccb.ca/wp-content/uploads/2021/03/CLARIFICATION-CCCB-Statement-on-COVID-19-Vaccine-Choice-9-March-2021-EN.pdf). This makes sense: If abortion is murder, then we should avoid using the cell lines of people killed by abortion. So the bishops said, “The Moderna and Pfizer vaccines… do not use abortion-derived cell lines in their development and production of the vaccine, however in some of their final testing processes, they have used unethically-derived cell lines. These two vaccines currently available in Canada can be morally acceptable for Catholics to receive since the connection to abortion is extremely remote. In contrast to these vaccines, the AstraZeneca and Johnson & Johnson vaccines utilized abortion-derived cell lines in their development, production, and confirmatory testing.”

The Quebec Health Minister, Christian Dubé, criticized this: “I strongly denounce the statement… I invite all Quebecers to trust our experts and those from around the world: all the vaccines we administer are effective” (https://montrealgazette.com/news/quebec/dube-lashes-out-at-catholic-bishops-for-suggesting-some-vaccines-are-more-morally-acceptable). Notice he doesn’t address our moral concern about abortion. Notice he isn’t tolerant of our moral views, which is supposed to be the great Canadian characteristic. He warps the bishops’ statement as if they were questioning effectiveness. But that’s not the moral question at hand. Nevertheless, we need to be ready for this type of criticism.

If you have a chance this week, watch The Passion of the Christ. It will be a kind of meditation and prayer.

Jesus is everything. We will have courage to follow Him before family, friends, and society, because we know He kept us in mind when He was suffering, and so we’ll keep Him in mind.