Does Jesus Honor His Mother? 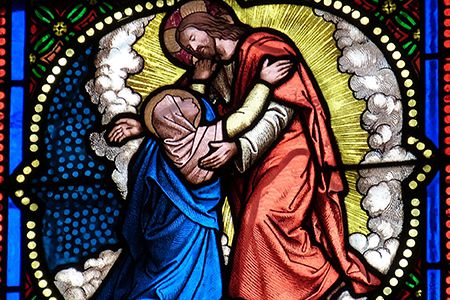 Genesis 3:9-15
After the man, Adam, had eaten of the tree, the LORD God called to the man and asked him, "Where are you?" He answered, "I heard you in the garden; but I was afraid, because I was naked, so I hid myself." Then he asked, "Who told you that you were naked? You have eaten, then, from the tree of which I had forbidden you to eat!" The man replied, "The woman whom you put here with me— she gave me fruit from the tree, and so I ate it." The LORD God then asked the woman, "Why did you do such a thing?" The woman answered, "The serpent tricked me into it, so I ate it." Then the LORD God said to the serpent: "Because you have done this, you shall be banned from all the animals and from all the wild creatures; on your belly shall you crawl, and dirt shall you eat all the days of your life. I will put enmity between you and the woman, and between your offspring and hers; he will strike at your head, while you strike at his heel."

2 Corinthians 4:13-5:1
Brothers and sisters: Since we have the same spirit of faith, according to what is written, I believed, therefore I spoke, we too believe and therefore we speak, knowing that the one who raised the Lord Jesus will raise us also with Jesus and place us with you in his presence. Everything indeed is for you, so that the grace bestowed in abundance on more and more people may cause the thanksgiving to overflow for the glory of God. Therefore, we are not discouraged; rather, although our outer self is wasting away, our inner self is being renewed day by day. For this momentary light affliction is producing for us an eternal weight of glory beyond all comparison, as we look not to what is seen but to what is unseen; for what is seen is transitory, but what is unseen is eternal. For we know that if our earthly dwelling, a tent, should be destroyed, we have a building from God, a dwelling not made with hands, eternal in heaven.

Mark 3:20-35
Jesus came home with his disciples. Again the crowd gathered, making it impossible for them even to eat. When his relatives heard of this they set out to seize him, for they said, "He is out of his mind." The scribes who had come from Jerusalem said, "He is possessed by Beelzebul," and "By the prince of demons he drives out demons." Summoning them, he began to speak to them in parables, "How can Satan drive out Satan? If a kingdom is divided against itself, that kingdom cannot stand. And if a house is divided against itself, that house will not be able to stand. And if Satan has risen up against himself and is divided, he cannot stand; that is the end of him. But no one can enter a strong man's house to plunder his property unless he first ties up the strong man. Then he can plunder the house. Amen, I say to you, all sins and all blasphemies that people utter will be forgiven them. But whoever blasphemes against the Holy Spirit will never have forgiveness, but is guilty of an everlasting sin." For they had said, "He has an unclean spirit." His mother and his brothers arrived. Standing outside they sent word to him and called him. A crowd seated around him told him, "Your mother and your brothers and your sisters are outside asking for you." But he said to them in reply, "Who are my mother and my brothers?" And looking around at those seated in the circle he said, "Here are my mother and my brothers. For whoever does the will of God is my brother and sister and mother."

One can’t say Jesus is very respectful of his mother in this Sunday’s gospel. When told his mother and siblings are outside asking for him, Jesus’ response, as quoted by Mark, is: “Who are my mother and my brothers?... For whoever does the will of God is my brother and sister and mother.” This sounds more like a rebuke than an affectionate welcome for his mother and relatives. Has Jesus forgotten the 4th commandment – honor thy father and thy mother? Could this be a sin committed by Jesus, who is supposedly sinless? Let’s reflect a little more before rushing into such a conclusion.

Put under the microscope in the first reading is Adam and Eve’s violation of God’s command not to eat from the tree of knowledge of good and bad (Gn 2:16-17). The consequence of our first parents’ disobedience is immediate and catastrophic: their nakedness, for which they have “felt no shame” before the violation suddenly makes them feel unsafe (Gn 2:25). But how is this catastrophic? Doesn’t everyone feel unsafe when naked? Hang on. There’s something more to this problem than meets the eye. Hidden underneath Adam’s seemingly harmless feeling of vulnerability is a devastating reality that necessitates God’s immediate action.

“I was afraid, because I was naked, so I hid myself,” Adam explains on God’s probing (Gn 3:9-10). When does a man feel like he needs to hide from God’s piercing eyes? You guessed it: when he is living in a state of grave sin. Such is the state that Adam and Eve find themselves in after disobeying God’s command. Since true happiness can only be found in God, our first parents can’t possibly be happy when they don’t want to be near God. In fact, there’s a place that is so far removed from God that His presence absolutely cannot be felt. It is called “hell”. When they choose not to follow God’s way; when they intentionally avoid God, desiring not to dwell in His abode of eternal happiness; hell is the only dwelling place left for them. Clearly, humanity is in dire straits after Adam and Eve’s fall from grace.

But God, who is loving and merciful, does not want the human race to fall away from Him forever. As a result, He announces His redemptive plan as soon as the first sinful act of our first parents is committed. To the serpent – identified later as “the Devil and Satan” by John (Rev 12:9) - He pronounces His judgement: “I will put enmity between you and the woman, and between your offspring and hers; he will strike at your head, while you strike at his heel” (Gn 3:15). This passage is what the Christian tradition has always referred to as “the first Gospel” or Protoevangelium, because we see in this ancient event a prophetic announcement of Jesus’ redemption which will crush Satan’s head and save us from eternal damnation (CCC410).

Note that apart from the Savior, whose job it is to crush Satan’s head; strategically placed in this confrontation between the good and the evil forces is “the woman” whom the Church traditionally understands as Mary since it’s her offspring, Jesus, that will strike at Satan’s head (CCC411, LG55). Her pivotal appearance in “the first Gospel”, just as the indispensable role she plays in the actual Gospel, is rich in meaning for many reasons, including her restoration of Eve’s mishaps, her immaculate conception, her singular mission as the Co-operatrix of our Lord in the salvation of mankind, etc. (CCC 411, 968). But for the purposes of this reflection, let’s focus on just one important reason: her obedience of faith.

Why is “the woman” – Mary – present in this decisive and monumental struggle between the forces of good and evil? She is there because she agrees to with the obedience of faith. When asked to play a pivotal role in God’s plan of salvation, Mary’s response is affirmative: “Behold, I am the handmaid of the Lord; let it be to me according to your word” (Lk 1:38). Her “yes” made God’s plan possible; her “yes” gave the Son the body that he needed for his sacrificial offering and made it possible for the Son to do the Father’s will (c.f. Heb 10:5-7, Redemptoris Mater n.13). Mary is “full of grace” because she believed – “And blessed is she who believed that there would be a fulfillment of what was spoken to her from the Lord” (Lk 1:28, 45).

Now back to this Sunday’s Gospel reading that has planted so much doubt in our heads. The crowd feels obliged to announce Mary’s arrival out of respect for her identity as Jesus’ mother. Far from being a rebuke of his mother, Jesus’ reply on hearing the announcement is a strong endorsement of her supreme honors and privileges, reminding the crowd – and the world - that Mary deserves our utmost respect not so much because she is his mother, but because she believed and obeyed the word of God. Mary’s obedience reversed the disobedience of Eve; her belief untied the knot created by Eve’s unbelief. “For whoever does the will of God is my brother and sister and mother”, our Lord insists (Mk 3:35).

Does Jesus Honor His Mother?