Doing What We Should Do 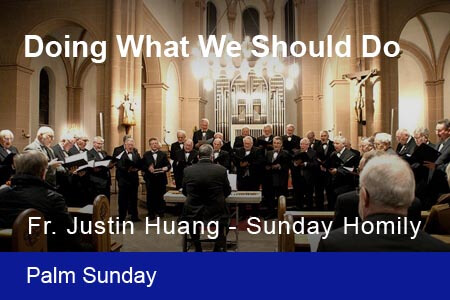 There are certain things that we should be doing right now but maybe don't feel like doing. Like what? Forgiving, smiling, doing our duty, being agreeable. Some of us are getting sick of social distancing and staying at home. It's the loving thing to do, but very sacrificial; it's particularly hard for social people, like Jack Ong; for others, who are more anti-social, it's relatively easy! My read of many people's situations is that things have gotten more difficult this past week.

Now, let's avoid the usual reason that the problem is outside of us. The problem is not COVID-19—it's just the occasion to reveal what's in our hearts. The real problem is inside of us. We struggle because we're not that virtuous, not yet fully like Jesus. So let's look at Him.

There is an absolutely fascinating fact in today's Gospel: Jesus sang. St. Matthew writes, "When they had sung the hymn, they went out to the Mount of Olives" (Mt 26:30). At the end of the first Mass, Jesus and the apostles ended with a hymn! Only Sts. Matthew and Mark record this: They felt it was necessary to write down—the only recorded time Jesus sang.

What did He sing? Because He was celebrating the Jewish Passover meal, we know it was psalms 115-118 at the end of the meal (Scott Hahn, Ignatius Catholic Study Bible, 55).

And notice what just happened before this: "While they were eating, he said, 'Truly I tell you, one of you will betray me.' And they became greatly distressed and began to say to him one after another, 'Surely not I, Lord?'" (Mt 26:21-22). Who recently has let us down, betrayed, or hurt us? Did we feel like singing and praising God then?

But Jesus sang. Imagine if we were to sing the same four psalms during this crisis? Psalm 115 criticizes idolatry, when people worship something other than God, implying that we're more committed to God now than ever; psalm 116 is when we thank Him; 117 praises Him for His love and faithfulness; and 118 is about being in distress but being rescued and then thanking God.

If things were so bad for Jesus, why did He sing?

Let's contemplate Jesus' face during the Last Supper, because He's our hope for this upcoming week. There are three qualities to think about when we imagine His face:
1) It's gentle and joyful. Remember what we said in January? When Jesus celebrated the Last Supper in the movie The Passion of the Christ, He had this big, warm smile and was so happy to be with His friends.
2) It's strong: Jesus is a serious man with a mission and never loses sight of doing the Father's will. He knows what's coming and there's no way He's not facing it.
3) It's human, therefore, a face of sorrow. Jesus didn't hide His humanity, and His divinity didn't obscure His human pain. It was there, mingled with His gentleness, joy, and strength. He accepted His weakness, but didn't let it stop Him from doing the Father's will.

One way to explain the goal of Christianity is to become like Christ, that our faces look like His. For example, last year, I told you about . These were not superheroes. They were regular Christians who prayed, deeply loved Jesus, but who felt fear, were traumatized, couldn't sleep at night, got into arguments, and had to decide whether to stay and get killed, or leave the people they were called to serve. They went through a kind of hell, but, at the end, they looked like Jesus.

Their last days were made into perhaps the best-ever film depicting what Christian life is all about. I want you to watch this scene of their last supper: They've finally made their decision to stay and face their circumstances, and they know death is coming. Watch how they start with grace, then one of the monks turns on Tchaikovsky's Swan Lake to celebrate! Watch their gentleness and joy, enjoying the wine, supporting and being with each other! But look at their strength: They are not leaving! Then see it mixed with an emotional pain that they can't hide. Watch how the camera captures their faces, and then zooms in on the eyes!

Those are beautiful faces! They were beatified in 2018 because they reflected so perfectly the fact of Jesus. I would give my whole life to become like that.

We talked last week about our rallying cry, that by July 1, we are going to be closer to Jesus, holier, stronger, and bolder. One measure of this is how our faces have changed. Are they more gentle and joyful, full of strength, but also with human suffering? Those monks were lights for their whole village, and we're supposed to be lights for everyone we meet.

This is the beginning of evangelization, when we imitate Christ's face and bring Him to people, listening to them, loving them, and sharing Jesus with them. People are hungering to see His face. This is what we're called to do this week!

What else? Do the right thing, do God's will. If we see the purpose of social distancing, then do it joyfully! Keep your distance but smile, wave, and greet people. If we've lost sight of the purpose, do it anyway, because it's the loving thing to do.

Same with prayer. Some of us are doing really well with fidelity to daily prayer, some are doing poorly. I'm going to challenge you on this one, because, as Fr. Pierre said, now is Holy Week, a time when real changes often happen: The majority of people make excuses as to why they don't pray faithfully. Do not blame it on COVID-19 because before COVID-19, you weren't much better. We need daily prayer to grow. But, at least 50% of the time, we won't feel like praying. Do it anyway and show how much you love Jesus!

This week, I challenge you to pray Psalms 115-118, and do so when you're feeling challenged!

And today, try your best to sing. We'll get into it another time, but singing is hugely important in the Christian life. It can change our heart and mind, and therefore our face.

Which virtue of Jesus will help you most this? Is it the fact that He praised His Father in song no matter what? Is it His gentle and joyful face? His strength? His sorrow? The real problem this week and always is inside us; we're not fully like Jesus. Focus on Him and you'll act and look like Him.