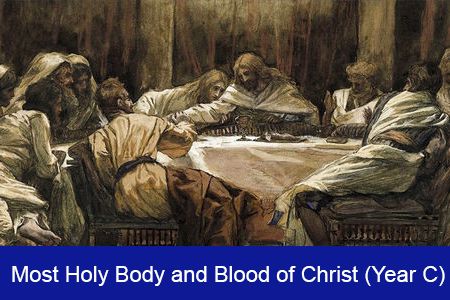 Solemnity of the Most Holy Body and Blood of Christ

Genesis 14:18:20
In those days, Melchizedek, king of Salem, brought out bread and wine, and being a priest of God Most High, he blessed Abram with these words: "Blessed be Abram by God Most High, the creator of heaven and earth; and blessed be God Most High, who delivered your foes into your hand." Then Abram gave him a tenth of everything.

1 Corinthians 11:23-26
Brothers and sisters: I received from the Lord what I also handed on to you, that the Lord Jesus, on the night he was handed over, took bread, and, after he had given thanks, broke it and said, "This is my body that is for you. Do this in remembrance of me." In the same way also the cup, after supper, saying, "This cup is the new covenant in my blood. Do this, as often as you drink it, in remembrance of me." For as often as you eat this bread and drink the cup, you proclaim the death of the Lord until he comes.

Luke 9:11B-17
Jesus spoke to the crowds about the kingdom of God, and he healed those who needed to be cured. As the day was drawing to a close, the Twelve approached him and said, "Dismiss the crowd so that they can go to the surrounding villages and farms and find lodging and provisions; for we are in a deserted place here." He said to them, "Give them some food yourselves." They replied, "Five loaves and two fish are all we have, unless we ourselves go and buy food for all these people." Now the men there numbered about five thousand. Then he said to his disciples, "Have them sit down in groups of about fifty." They did so and made them all sit down. Then taking the five loaves and the two fish, and looking up to heaven, he said the blessing over them, broke them, and gave them to the disciples to set before the crowd. They all ate and were satisfied. And when the leftover fragments were picked up, they filled twelve wicker baskets.

A few months ago, there were two tragic pieces of news:

Here’s the message from these two incidents: The culture of Catholics, especially towards the Eucharist, has a powerful impact on our lives, either positive and negative. When I was in Germany for 2005 World Youth Day, a woman came up to me after Mass annoyed that I was careful about crumbs of the Eucharist on my hand (because Jesus is present in every crumb): She advised me to not worry about letting them fall to the ground! If Catholics in Germany don’t pray and want to change official Church teaching, and when bishops think kneeling is a problem, we’re going to have a dying church.

Today’s Gospel is referred to as the miracle of the ‘multiplication of loaves,’ and shows us a healthy spiritual culture! For the early Christians, this event, full of details, mirrored their own celebration of Mass.

“The Mass was the center of life” for the early Church (Scott Hahn, Signs of Life, 37). Christians would meet every Sunday to celebrate Mass, and I remember hearing that they’d meet before dawn because they had to go to work afterwards; there was no weekend in the Roman world.

In 304, a group of Catholics in Northern Africa were rounded up and tortured due to Emperor Diocletian’s persecution. “Interrogated about why he disobeyed the Emperor’s decree, a young lector named Felix said this: ‘As if one could be a Christian without the Mass or the Mass could be celebrated without a Christian! . . . The Christian exists through the Mass and the Mass in Christians! Neither can exist without the other. . . . We celebrated the glorious assembly. We gathered to read the Scriptures of the Lord at the Mass’” (https://www.firstthings.com/web-exclusives/2010/06/glorify-god-by-your-life). Their culture, centered on the Eucharist, was so healthy that the Church grew by 40% per decade (Mike Aquilina, The Mass of the Early Christians, 23).

Here’s a short video of Catholic Eucharistic culture throughout time [See Presence from FORMED about St. Tarcisius, the little girl in China, etc.].

Culture is the habits, norms, beliefs, and underlying assumptions of any group. How many of you would eat rice for breakfast? But, in Canada, that’s not part of our culture. Do you know how people in Italy answer the phone? They say, “Pronto,” meaning, “Ready.” Strange, right? At the famous Zappos online company, if you’re a new employee and wear a tie to work, they’ll stop you at the front door and take away your tie, unless it’s fashionable, because they have a culture of fun!

We Catholics have our own culture too. How do we start prayers? With the Sign of the Cross—Protestants don’t do that. In our diocese, do most Catholics talk in church or not? That’s not a healthy culture. Do most Catholics get bored during the homily? That’s who we are.

Most of us naturally go along with the culture unless we think and act intentionally. Are you aware that I, as your priest, am actively trying to change the culture here? We’ve seen some amazing changes in culture here: It’s part of our culture here to learn, with over 540 people taking the first level of Faith Studies. Alpha is part of our culture now. What’s the term that’s become center of our efforts to build our parish centre? It’s not ‘fundraising.’ It’s ‘sacrificial giving.’ Because we’ve talked about Devout Conversations for three weeks now, the culture is changing!

Now I need your help with two cultural habits:

We talked about black masses at the beginning, so let’s end with a story about one. In 2014, some students at Harvard University arranged to have a black mass on campus grounds, with the permission of the president. The response of, Catholics wasn’t, “I believe. What can I do?” Many Catholics had a Eucharistic heart and so they did what was part of their culture: They called for a Holy Hour of Eucharistic adoration and a procession through the streets. At the scheduled time of the black mass, so many Catholics gathered at St. Paul’s church that it overflowed outside. During the procession, Catholics who happened to be passing by also knelt down, while others joined in singing (
https://www.catholicsun.org/wp-content/uploads/2014/05/Boston-blackmass.jpg;
https://c.o0bg.com/rf/image_960w/Boston/2011-2020/2014/05/13/BostonGlobe.com/Metro/Images/Lee_blkmassresponse4_met-13670.jpg;
https://www.thebostonpilot.com/news/20140516/images/700x450_Pilot_12857.jpg;
https://www.masslive.com/resizer/9tvqae4x3xS6hpkIlfgAlxQvvEs=/1200x0/advancelocal-adapter-image-uploads.s3.amazonaws.com/image.masslive.com/home/mass-media/width2048/img/mass_river_boston_news/photo/catholic-cambridge-procession--4d23d96a6ead2ceb.png;
https://cdn3.creativecirclemedia.com/thericatholic/original/1400256728_452e.jpg;
https://i.dailymail.co.uk/i/pix/2014/05/13/article-2626684-1DCA3A2700000578-935_634x343.jpg;
https://i1.wp.com/www.likemotherlikedaughter.org/wp-content/uploads/2014/05/IMG_1111.jpg?resize=598%2C800).
Because of this, at the last moment, the organizers of the black mass cancelled their sacrilegious event. (https://www.catholicculture.org/commentary/the-city-gates.cfm?id=1721). This attack on Jesus was overcome by the powerful Eucharistic culture of a few Catholics.