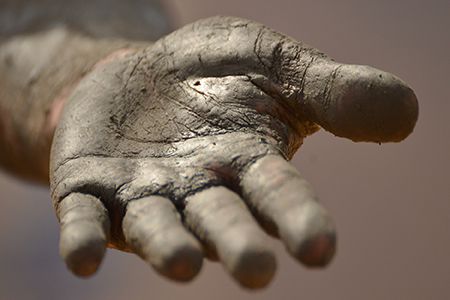 Rome is a many-splendored city. It is also a city of many names. For me, a first-time visitor to the City of the Seven Hills in the Christmas season of 2008, it was the Eternal City that dazzled many a brilliant thinker over the centuries. It was the City of God that gave St. Augustine comfort when the Roman Empire fell to pieces. It was, most of all, the City of Sts. Peter and Paul; the city I called home spiritually.

It was the feast day of the Holy Family, 2008. I was alone wandering aimlessly in St. Peter's Square, waiting for my family to join me when their shopping spree was finished. People were milling around; everyone looked excited. For whatever reason, people always looked excited while visiting the Vatican. It's as though something was about to happen, or some important figure was about to appear anytime. Could it be the Holy Father that people were hoping to see unexpectedly? Bored by the wait but feeling obligated to join the jovial atmosphere of the Square, I took a moment to admire the Christmas decorations, the centerpiece of which was the Holy Family, placed casually near the obelisk, in a humble setting featuring the manger and a few animals.

Time - she is always in such a haste. Here we are, nine years later, celebrating another Feast of the Holy Family. In between, my family has visited Rome one more time in 2012 as one of the many stops of a pilgrimage to follow St. Paul's footsteps. Many things have also happened to us as a family that add to our family story as we continue to grow, both physically in maturity and spiritually in holiness. As ecclesia domestica – the domestic Church – the family is a mystery that enables us to ascend to another level of mystery, the Church as familia Dei – the Family of God, until we reach the highest and holiest mystery of the Blessed Trinity – the Divine Family.

This Sunday's reading from the Book of Sirach is considered a commentary on the fourth commandment – honor your father and your mother. In the second reading, Paul's insistence that family relationships be carried on “in the Lord” (Col 3:18, 20) is a recognition of the family as a place where faith is lived out and holiness achieved. Family life is a source of holiness when lived in accordance with God's will. The same message resonates in today's gospel reading where the Jewish piety of Jesus' time is duly observed by the Holy Family: Mary's submission to the Mosaic Law of purification and the presentation of the Infant Jesus to the Lord.

Pope St. John Paul II teaches that “[t]he history of mankind, the history of salvation, passes by way of the family” (Letter to Families, n.2). As the people of God – “a chosen race, a royal priesthood, a holy nation” (1 Peter 2:9) – we see the family as the most sacred ground from which our personal holiness is launched and nurtured. Through baptism, we've been “made to share in the grace of God's own family life, as His beloved children. This is the very thing that we call to mind every time we make the Sign of the Cross, namely, our adoption as God's children and entrance into the divine family of Christ, the Church” (Hahn & Suprenant, Catholic for a Reason – Scripture and the Mystery of the Family of God, p.5). We live, breathe, and pray in the name of the Divine Family of the Father, and of the Son, and of the Holy Spirit.

familyFeast of the Holy Family

family
Feast of the Holy Family

Music of the Heart – Family

Family – a Battle Ground or a Sweet and Safe Home Base?

We belong to a natural and a supernatural family

【Spiritual Talk】- The Feast of the Holy Family

“. . . every family, despite its weaknesses, can become a light in the darkness of the world”

Placing God’s will at the centre of our family lives