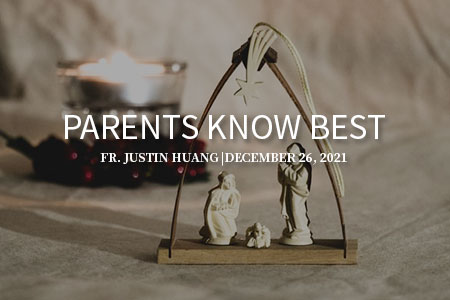 The Holy Family of Jesus, Mary and Joseph

Sirach 3:2-6,12-14
God sets a father in honor over his children; a mother’s authority he confirms over her sons. Whoever honors his father atones for sins, and preserves himself from them. When he prays, he is heard; he stores up riches who reveres his mother. Whoever honors his father is gladdened by children, and, when he prays, is heard. Whoever reveres his father will live a long life; he who obeys his father brings comfort to his mother. My son, take care of your father when he is old; grieve him not as long as he lives. Even if his mind fail, be considerate of him; revile him not all the days of his life; kindness to a father will not be forgotten, firmly planted against the debt of your sins —a house raised in justice to you.

Colossians 3:12-21
Brothers and sisters: Put on, as God’s chosen ones, holy and beloved, heartfelt compassion, kindness, humility, gentleness, and patience, bearing with one another and forgiving one another, if one has a grievance against another; as the Lord has forgiven you, so must you also do. And over all these put on love, that is, the bond of perfection. And let the peace of Christ control your hearts, the peace into which you were also called in one body. And be thankful. Let the word of Christ dwell in you richly, as in all wisdom you teach and admonish one another, singing psalms, hymns, and spiritual songs with gratitude in your hearts to God. And whatever you do, in word or in deed, do everything in the name of the Lord Jesus, giving thanks to God the Father through him. Wives, be subordinate to your husbands, as is proper in the Lord. Husbands, love your wives, and avoid any bitterness toward them. Children, obey your parents in everything, for this is pleasing to the Lord. Fathers, do not provoke your children, so they may not become discouraged.

Luke 2:41-52
Each year Jesus’ parents went to Jerusalem for the feast of Passover, and when he was twelve years old, they went up according to festival custom. After they had completed its days, as they were returning, the boy Jesus remained behind in Jerusalem, but his parents did not know it. Thinking that he was in the caravan, they journeyed for a day and looked for him among their relatives and acquaintances, but not finding him, they returned to Jerusalem to look for him. After three days they found him in the temple, sitting in the midst of the teachers, listening to them and asking them questions, and all who heard him were astounded at his understanding and his answers. When his parents saw him, they were astonished, and his mother said to him, “Son, why have you done this to us? Your father and I have been looking for you with great anxiety.” And he said to them, “Why were you looking for me? Did you not know that I must be in my Father’s house?” But they did not understand what he said to them. He went down with them and came to Nazareth, and was obedient to them; and his mother kept all these things in her heart. And Jesus advanced in wisdom and age and favor before God and man.

Music of the Heart – Family

Family – a Battle Ground or a Sweet and Safe Home Base?