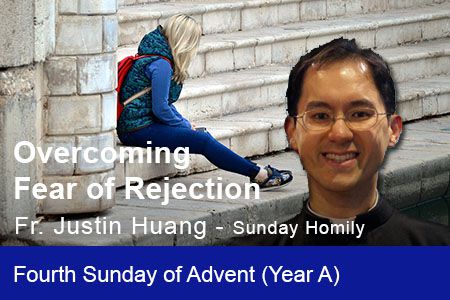 Isaiah 7:10-14
The LORD spoke to Ahaz, saying: Ask for a sign from the LORD, your God; let it be deep as the netherworld, or high as the sky! But Ahaz answered, “I will not ask! I will not tempt the LORD!” Then Isaiah said: Listen, O house of David! Is it not enough for you to weary people, must you also weary my God? Therefore the Lord himself will give you this sign: the virgin shall conceive, and bear a son, and shall name him Emmanuel.

Romans 1:1-7
Paul, a slave of Christ Jesus, called to be an apostle and set apart for the gospel of God, which he promised previously through his prophets in the holy Scriptures, the gospel about his Son, descended from David according to the flesh, but established as Son of God in power according to the Spirit of holiness through resurrection from the dead, Jesus Christ our Lord. Through him we have received the grace of apostleship, to bring about the obedience of faith, for the sake of his name, among all the Gentiles, among whom are you also, who are called to belong to Jesus Christ; to all the beloved of God in Rome, called to be holy. Grace to you and peace from God our Father and the Lord Jesus Christ.

Matthew 1:18-24
This is how the birth of Jesus Christ came about. When his mother Mary was betrothed to Joseph, but before they lived together, she was found with child through the Holy Spirit. Joseph her husband, since he was a righteous man, yet unwilling to expose her to shame, decided to divorce her quietly. Such was his intention when, behold, the angel of the Lord appeared to him in a dream and said, “Joseph, son of David, do not be afraid to take Mary your wife into your home. For it is through the Holy Spirit that this child has been conceived in her. She will bear a son and you are to name him Jesus, because he will save his people from their sins.” All this took place to fulfill what the Lord had said through the prophet: Behold, the virgin shall conceive and bear a son, and they shall name him Emmanuel, which means “God is with us.” When Joseph awoke, he did as the angel of the Lord had commanded him and took his wife into his home.

Once I was doing a video conference call with eleven priests, and the topic for discussion was: What’s your greatest fear in trying to renew your parish, make it spiritually alive? So I wrote down my answer. The first priest to share had been doing parish renewal for two years and while some things have been fruitful, some people have left his church, and he was afraid he might ‘look like an idiot’: his greatest fear was failure. Then another priest shared: ‘What if this renewal doesn’t work out?’ To my surprise, every priest shared that their fear was failure. And I had written down: failure.

One priest-professor writes that the deepest fear of men is rejection, which, he says, is why men actually look at pornography, because there’s no fear of rejection by women, which would be another form of failure. Of course, women have fears of not being good enough or enough for those they love, and millennials have fears of failing too.

Let’s look at the fear of St. Joseph in the Gospel and see how God overcomes it. It says, “The birth of Jesus the Christ took place in this way. When his mother Mary had been engaged to Joseph, but before they lived together, she was found to be with child from the Holy Spirit. Her husband Joseph, being a righteous man and unwilling to expose her to public disgrace, planned to dismiss her quietly” (Mt 1:18-19).

Our mother Mary and St. Joseph are ‘betrothed,’ not ‘engaged.’ Betrothal means they’re legally married in Jewish culture, but not yet living under the same roof. St. Joseph learns that she’s pregnant and decides to divorce her quietly.

What’s fascinating is that we don’t know precisely why he decided to divorce. He knew she was pregnant, but what did he think? There are three theories in Catholic theology, all supported by different saints.

“But just when he had resolved to do this, an Angel of the Lord appeared to him in a dream and said, ‘Joseph, son of David, do not be afraid to take Mary as your wife, for the child conceived in her is from the Holy Spirit. She will bear a son, and you are to name him Jesus, for he will save his people from their sins…’ When Joseph awoke from sleep, he did as the Angel of the Lord commanded him; he took her as his wife” (Mt 1:20-21,24).

The key reality here is that “God takes the initiative!” He always guides us in spite of our fears. He often overcomes them, or at least gives us courage to do His will. St. Joseph “is being asked to say ‘yes’ to what Mary already has said ‘yes’” (Bertrand Buby, SM, Mary of Galilee, Volume 1, 54), and God is waiting for a ‘Yes’ from us.

Pope Benedict says that “only someone [like St. Joseph] with a real sensitivity for God and his ways can receive God’s message” in the form of a dream. And so we need to be sensitive: God’s asking great things of us, things outside our comfort zone, and “it demands extraordinarily courageous faith” (Jesus of Nazareth, Volume 3, 41).

Let’s apply this to a widespread fear among Catholics of talking about God and faith, and inviting people to a faith event like Alpha. We’re now in our fourth homily about Alpha as Culture, and the virtue we want to consider is what’s called being evangelistically positioned, which means sharing the good news we’ve received. Many of us are afraid we’ll be rejected when we invite, that we won’t be liked, that people will misunderstand us.

But remember, in September, I mentioned one study that found that 82% of people would come to a church event if someone invited them. Holy Trinity Brompton, the Anglican church that started the Alpha program in London, England, regularly has over 300 people for each session of Alpha. I was there, I saw it [Pictures]. Hundreds of mainly young adults in a city just as secular as Vancouver were lining up to enter a traditional-looking church. They went almost always because someone from that church invited them.

Jesus didn’t just live His life and wait for people to come to Him. He had a mission, and went out to other people! All the popes for the past 50 years have been emphasizing that we have to go out, talk to people about the deepest questions in their hearts, and, when the time is right, speak to them about God the Father and Jesus. This is part of what it means to be Christian.

Alpha is for all of us, because it focuses on the core truths of our faith, “however, it really seems to resonate best with those who would not call themselves followers of Christ or who have no church background” (7 Best Practices of Alpha). This is why we run Alpha in a café, because we want them to be comfortable. St. Anthony’s could be intimidating for some, and we don’t want to force anyone. We just want to discuss questions like: Is there more to life? Who is Jesus? How can I have faith?

If we don’t know when’s the right time to invite, ask the Holy Spirit for the gift of good timing. After we invite, give people a chance to think about it. For some people, we’ll know not to ask them again, while, for others who show openness, we may want to follow up with them.

This year, we’re doing something different. Rather than focusing on inviting to Christmas Mass, which of course we can still do, we’re focused on inviting them to Alpha on January 9, because Church leaders have realized that Alpha is so more accessible for people: It’s more relaxed, there’s food, an opportunity to engage, and the videos are brilliant. Of course, Mass is more important than Alpha, but Mass alone doesn’t lead to conversion because most people aren’t in a state to receive its graces. If Christmas Mass were effective in converting hearts, we’d see people coming after Christmas Mass all over the world, but this isn’t what’s happening; most people don’t come back.

This is specifically what I’m asking all of us to do this Christmas: Invite the people for whom you’ve been praying for the past three weeks to Alpha. It’s three weeks before January 9, and we’re going to look for the time to ask them lovingly. Once we’ve invited them, check off their names on our cards, bring them back to Mass, put them in the collection basket and we’ll count how many invitations we’ve made.

This isn’t because people are numbers, but because we have a mission. We want to measure how much courage and love we have for other people, and if Jesus’ call, “Do not be afraid” has led to action!

If we truly believe Jesus is the way, the truth, and the life, then the wait-and-see attitude is not congruent with this. This doesn’t mean we force the invitation. It means that we’re eager to invite, looking for opportunities that the Holy Spirit gives us.

We’re not focused on how many people say ‘Yes’—that’s the Holy Spirit’s business. We’re focused on if we loved our neighbour enough to share with them.

I wonder if we’ll say ‘Yes’ to this. I’m actually afraid to ask you to check off names and bring back the cards because I fear you won’t do it; I fear failure.

But God wants us to do this. This is a holy time of year, and Jesus is already working in everyone’s heart. God’s taking the initiative, and I feel more confidence. I keep on thinking about those names I’ve written down, and that 46% of Canadians want a closer relationship with God. If we follow St. Joseph’s attitude of saying “Yes,” everything will work out.

We end with a two-minute video about a man named Bob, who was invited to Alpha not once, twice, three times, but seven times. Think about the faith of that woman who invited him, her love for Bob and what Alpha did for him.