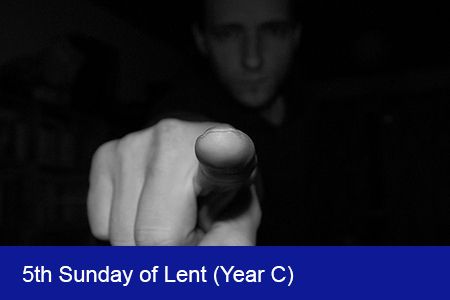 Isaiah 43:16-21
Thus says the LORD, who opens a way in the sea and a path in the mighty waters, who leads out chariots and horsemen, a powerful army, till they lie prostrate together, never to rise, snuffed out and quenched like a wick. Remember not the events of the past, the things of long ago consider not; see, I am doing something new! Now it springs forth, do you not perceive it? In the desert I make a way, in the wasteland, rivers. Wild beasts honor me, jackals and ostriches, for I put water in the desert and rivers in the wasteland for my chosen people to drink, the people whom I formed for myself, that they might announce my praise.

Philippians 3:8-14
Brothers and sisters: I consider everything as a loss because of the supreme good of knowing Christ Jesus my Lord. For his sake I have accepted the loss of all things and I consider them so much rubbish, that I may gain Christ and be found in him, not having any righteousness of my own based on the law but that which comes through faith in Christ, the righteousness from God, depending on faith to know him and the power of his resurrection and the sharing of his sufferings by being conformed to his death, if somehow I may attain the resurrection from the dead. It is not that I have already taken hold of it or have already attained perfect maturity, but I continue my pursuit in hope that I may possess it, since I have indeed been taken possession of by Christ Jesus. Brothers and sisters, I for my part do not consider myself to have taken possession. Just one thing: forgetting what lies behind but straining forward to what lies ahead, I continue my pursuit toward the goal, the prize of God’s upward calling, in Christ Jesus.

John 8:1-11
Jesus went to the Mount of Olives. But early in the morning he arrived again in the temple area, and all the people started coming to him, and he sat down and taught them. Then the scribes and the Pharisees brought a woman who had been caught in adultery and made her stand in the middle. They said to him, “Teacher, this woman was caught in the very act of committing adultery. Now in the law, Moses commanded us to stone such women. So what do you say?” They said this to test him, so that they could have some charge to bring against him. Jesus bent down and began to write on the ground with his finger. But when they continued asking him, he straightened up and said to them, “Let the one among you who is without sin be the first to throw a stone at her.” Again he bent down and wrote on the ground. And in response, they went away one by one, beginning with the elders. So he was left alone with the woman before him. Then Jesus straightened up and said to her, “Woman, where are they? Has no one condemned you?” She replied, “No one, sir.” Then Jesus said, “Neither do I condemn you. Go, and from now on do not sin any more.”

A/N: Two stories: First, aboard the papal plane in 2013, Pope Francis said, in reference to the gay lobby in the Vatican, “You must distinguish between the fact of a person being gay and the fact of someone forming a lobby, because not all lobbies are good. This one is not good. If someone is gay and is searching for the Lord and has good will, then who am I to judge him?” (https://w2.vatican.va/content/francesco/en/speeches/2013/july/documents/papa-francesco_20130728_gmg-conferenza-stampa.html ). These words are now the signature phrase of his pontificate, and they’ve touched many people, because, deep down, we’re all afraid of being condemned and not being loved (https://www.ncregister.com/daily-news/pope-francis-at-80).

S: But, in our culture, we tend to do one or the other: We either love people and never help them face their sins, or we tell people their sins without loving them. Jesus, in today’s Gospel, balances these two approaches perfectly. A woman has been caught in the act of adultery, and the Mosaic law (named after Moses), commands her to be stoned to death. Jesus manages to save her life, and, when her accusers leave, asks her, “‘Woman, where are they? Has no one condemned you?’ She said, ‘No one, sir.’ And Jesus said, ‘Neither do I condemn you. Go your way, and from now on do not sin again’” (Jn 8:10-11). Jesus loves her, but also acknowledges that she’s committed a grave sin, and tells her to stop. He says to all of us, “I do not condemn you. I love you. But do not sin again, because you already know what you’re doing is wrong.”

Jesus says in St. Matthew’s Gospel, “Judge not, that you be not judged. For with the judgment you pronounce you will be judged… Why do you see the speck that is in your brother’s eye, but do not notice the log that is in your own eye? … You hypocrite, first take the log out of your own eye, and then you will see clearly to take the speck out of your brother’s eye” (7:1-3,5). Jesus is not saying to never correct people, because, at the end, He says we’re supposed to correct ourselves before correcting others. And in order to correct others well, we need to see the truth about ourselves before trying to help others see the truth about themselves. What we’re supposed to avoid is condemning people or judging their hearts, because we don’t know their hearts, unless they tell us or we have evidence. And we’re supposed to be merciful and fair in our judgments, if we want to receive a merciful and fair judgment (Curtis Mitch & Edward Sri, The Gospel of Matthew, in Catholic Commentary on Sacred Scripture, 114-115).

St. Leo the Great says, “Christian, recognize your dignity and, now that you share in God's own nature, do not return to your former base condition by sinning… Never forget that you have been rescued from the power of darkness and brought into the light of the Kingdom of God” (CCC 1691).

There were some great millennials I used to minister to who knew they could be flaky, meaning they would avoid commitment, they’d think too much of themselves, and would often live superficially—it’s a fun life, but they didn’t have self-respect and none of their peers looked up to them; they were floating through life. My duty was to help them recognize their call to holiness, to be saints! So I would give them feedback, encouragement and criticism. Sometimes it was done rightly, sometimes wrongly. May God and they forgive me for my sins in this regard; and I did improve. But they all wanted to hear it, because they wanted to grow! And to see them years later mature and be men and women of holiness and virtue means the pain of hearing our sins was worth it. And, believe it or not, they’re still happy to see me, because I loved them, I corrected them out of love and they knew that.
A: So here are three ways to become the saints we’re meant to become [Vision]. First, be careful of misunderstanding the phrase, “Who am I to judge?” I believe I know what the Holy Father was getting at, but so many Catholics have told me they don’t, and, to prove their point, it’s true that this phrase has been so badly misunderstood in Western culture to mean no one has to morally change. There has been tremendous fallout from this phrase because every time someone says, “That’s wrong,” people respond, “Hey, the pope says, ‘Who am I to judge?’” But some judgements are right. If we believe racism, slavery, and bullying are wrong, we’re judging, which is right. The phrase might appear to make the Church seem more loving, but, as Michael Dopp once said: There’s no statistical evidence to show that more people are coming to Christ since the Holy Father said this.

Second, desire to know your sins and faults. How much do you want to be corrected? And, when corrected, how do we respond? That will indicate our level of growth.

Third, lovingly tell people their faults. Jesus said, “Do not judge by appearances, but judge with right judgment” (Jn 12:24). Go to Confession first, so that our hearts are pure. The reality is that we all sin all the time, so, if don’t go to Confession, let’s say once a month, then most of the time, our perspective will be skewed. Love the person first; in our minds, give that person a big joyful hug or smile at them, so we have no unjust anger towards them. And don’t do it all the time, because that’s overwhelming. We don’t want to become like those negative people who only see faults and problems; rarely do they affirm, rarely do they see the good.

V: One of the most beautiful realities is when people start to grow at a new level. Not only do they know they are loved, but they start to respect themselves, because they’re becoming who God made them to be. Once we get a taste of becoming the man or woman God made us to be, we’ll never go back.