The Value of One Person 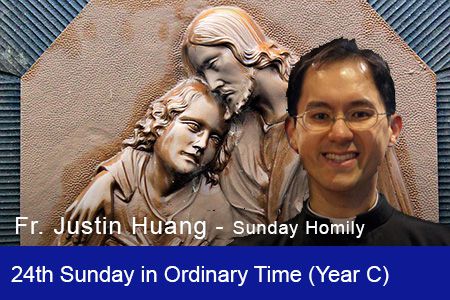 Exodus 32:7-11, 13-14
The LORD said to Moses, “Go down at once to your people, whom you brought out of the land of Egypt, for they have become depraved. They have soon turned aside from the way I pointed out to them, making for themselves a molten calf and worshiping it, sacrificing to it and crying out, ‘This is your God, O Israel, who brought you out of the land of Egypt!’ “I see how stiff-necked this people is, ” continued the LORD to Moses. Let me alone, then, that my wrath may blaze up against them to consume them. Then I will make of you a great nation.” But Moses implored the LORD, his God, saying, “Why, O LORD, should your wrath blaze up against your own people, whom you brought out of the land of Egypt with such great power and with so strong a hand? Remember your servants Abraham, Isaac, and Israel, and how you swore to them by your own self, saying, ‘I will make your descendants as numerous as the stars in the sky; and all this land that I promised, I will give your descendants as their perpetual heritage.’” So the LORD relented in the punishment he had threatened to inflict on his people.

1 Timothy 1:12-17
Beloved: I am grateful to him who has strengthened me, Christ Jesus our Lord, because he considered me trustworthy in appointing me to the ministry. I was once a blasphemer and a persecutor and arrogant, but I have been mercifully treated because I acted out of ignorance in my unbelief. Indeed, the grace of our Lord has been abundant, along with the faith and love that are in Christ Jesus. This saying is trustworthy and deserves full acceptance: Christ Jesus came into the world to save sinners. Of these I am the foremost. But for that reason I was mercifully treated, so that in me, as the foremost, Christ Jesus might display all his patience as an example for those who would come to believe in him for everlasting life. To the king of ages, incorruptible, invisible, the only God, honor and glory forever and ever. Amen.

Two years ago, I learned something funny about boys and girls. At the end of the school year, we said goodbye to some staff members at our school, some of whom had been here for over 15 years. We held an assembly, with the kids in a big circle, singing songs and giving gifts to the teachers, who stood in the middle. At the end, some girls went up to the teachers and hugged them. Many of the girls from Grades 4-7 were crying. I was amazed at their maturity: They perceived what was important: people who had sacrificed their lives for them with love were now leaving, and it was a time of sadness, gratitude, and joy. But then some boys came up to me, totally clueless, and said, “Why’s everyone crying?” I laughed and said, “You’ll understand when you’re older.”

Sometimes we don’t understand what’s important to the closest people in our lives—that’s detrimental, because the essence of friendship in Latin is: idem velle atque idem nolle—to want the same thing and to reject the same thing (Pope Benedict XVI, Deus Caritas Est, 17).

Can you think of someone close to you who doesn’t love what you love? For example, our friends never want to do what we want. We want to talk about our faith, but our children have no interest. We think, “I love this, but you don’t get it.” For one wife here, cleaning the house is her thing, but not her husband’s. One time, they came home at 10 p.m. after a long trip. He wanted to take a shower and go to bed. Not for her. After emptying the suitcases, she started vacuuming the dining room because it was dusty. He said, “It is not like we left the house for years but it is important for her to feel good about it before going to bed.”

An important way to strengthen close relationships, and this is really good for couples who are dating and married couples, is to ask the other person: “Why is that so important to you?”

This is one way we can look at the Gospel: from the point of view of understanding what’s important to God. “All the tax collectors and sinners were coming near to listen to Jesus. And the Pharisees and the scribes were grumbling and saying, ‘This fellow welcomes sinners and eats with them’” (Lk 15:1-2). Jesus came for all of us, and is beyond happy when we sinners turn to Him! But the Pharisees don’t get it. So He takes the initiative to explain His joy. His three parables apply also to us, because none of us fully understands God the Father’s heart.

“Only 29% of religiously-committed people in Canada view evangelism positively”. However, Jesus has just taught us that evangelization gives Him disproportionate joy. That’s why He commands us to evangelize. We’re in the season of Made for Mission, and today we want to celebrate the gift of evangelization. Evangelization isn’t about forcing people to believe. It’s about God looking for us, sending Jesus on a mission to bring us home! Remember, none of us here who are Catholic was born Catholic. Even if we were baptized as babies, someone else gave us the gift, and we want to share the gift. It’s something very positive.

Pope Francis has been telling Catholics not just to worry about ourselves but to share the joy, talk about Jesus, and invite people to get to know Him. This is why my Sunday homilies keep in mind that many of us here know Jesus well, but some of us might be new to the world of faith. I remember what it was like to go to a church for the first time; no one showed any care for me. Most churches never think about what it’s like for someone unfamiliar to visit their church.

Peter Lee, our new director of evangelization, was raised Buddhist but became Catholic in 2007. He said something very interesting that’s an expression of Jesus’ mentality: He wants to create a place where our friends who don’t go to church feel comfortable. If we knew our family was super welcoming, we’d invite friends over. If we knew our church was welcoming to non-churchgoers, we’d more readily invite.

This is why we always celebrate Alpha and Faith Studies, because they are non-threatening ways for people to encounter Jesus, and give us a chance to say “Yes” to Him when we’re ready. In December and January, our next season will be called Alpha as Culture, where we learn the seven best practices of Alpha and incorporate them in our parish culture; and where we’ll invite family and friends to Christmas Mass, a free pancake breakfast, and then Alpha on January 9, 2020. One study says that 82% of people would come to a church event if someone invited them (Dr. Thom Rainer, The Unchurched Next Door).

This is what the Father’s love looks like concretely. Natalie, who came back to church after ten years of being away, invited ten friends to Christmas Mass last year and eight came. Suzanne, who became Catholic in 1999 and then a disciple in 2015, says she invites people maybe 3-4 times a month, and people respond very positively. She has the Father’s heart and goes out looking for people because she knows what it’s like to be far away from God. It was Linus who helped bring Andrew back to the faith by explaining it coherently.

And then there’s Barry. Barry was sent to a Catholic school in Hong Kong even though his father was an atheist and his mother a Buddhist. He said his heart was converted to Jesus when he was nine and he was eventually baptized when 30. When I asked him weeks ago to how many people he’s been the godfather, he said seven. That’s amazing! He’s also helped at least 23 people come back to God.

For example, after one of Barry’s friends converted, the husband also wanted to convert because of Barry’s joy. Another time, he invited a divorced woman to come back; she had left because she felt guilty, but Barry convinced her that she still belonged in the Church. Another woman never wanted to become Christian because she found her Protestant friends to be pushy. But Barry never pushed. He just talked to her about his love for Jesus, and when he asked her about baptism, she accepted. Another very academic woman first became Protestant, then went on a pilgrimage to Europe, encountered the Catholic heritage, and felt something was missing in her faith. So Barry explained these things to her, introduced her to the Rosary, and taught her to pray it, reminding her that it’s rooted in the Bible. She started to pray it every night and eventually became Catholic.

When one of his brothers was diagnosed with cancer in his 50s, Barry was always praying for him, and the siblings started to get closer. One night, he and Barry talked together for an hour, something which had never happened, and Barry asked, “Have you thought about being baptized?” “I don’t know anything.” Barry said, “Don’t worry about it. Just come with us to church.” So he started going, and sometime later, when he was dying in emergency, Barry called a priest, who said, “If I don’t make it in time, you baptize him!” That’s what happened: Barry asked him three times if he wanted to be baptized, his brother said, “Yes,” and then Barry did it, and his brother died six months later.

Their mom also became Catholic in her 60s. Barry always respected his mother’s Buddhist and Taoist faith, but, when she was sick, Barry said that he offered her to our Mother Mary. When she recovered, she wanted to thank Mary, so Barry suggested she bring flowers to the church. She started coming regularly, became Catholic, and never missed Mass. By the way, after she died, a friend noticed that Barry was never sad. He wanted that same joy, and Barry told him it was from Jesus. That man’s now a better Catholic than Barry.

There are four key lessons we can learn from Barry:

Do any of us have this special gift of evangelization? We can ask for it. Do we hunger to help people know Jesus? Do we rejoice when people finally meet Him? The greatest joy in heaven is that one of us lost children comes home! What do we mean to Him? Everything.