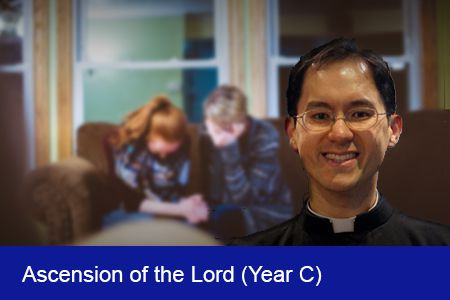 Acts 1:1-11
In the first book, Theophilus, I dealt with all that Jesus did and taught until the day he was taken up, after giving instructions through the Holy Spirit to the apostles whom he had chosen. He presented himself alive to them by many proofs after he had suffered, appearing to them during forty days and speaking about the kingdom of God. While meeting with them, he enjoined them not to depart from Jerusalem, but to wait for “the promise of the Father about which you have heard me speak; for John baptized with water, but in a few days you will be baptized with the Holy Spirit.” When they had gathered together they asked him, “Lord, are you at this time going to restore the kingdom to Israel?” He answered them, “It is not for you to know the times or seasons that the Father has established by his own authority. But you will receive power when the Holy Spirit comes upon you, and you will be my witnesses in Jerusalem, throughout Judea and Samaria, and to the ends of the earth.” When he had said this, as they were looking on, he was lifted up, and a cloud took him from their sight. While they were looking intently at the sky as he was going, suddenly two men dressed in white garments stood beside them. They said, “Men of Galilee, why are you standing there looking at the sky? This Jesus who has been taken up from you into heaven will return in the same way as you have seen him going into heaven.”

Ephesians 1:17-23
Brothers and sisters: May the God of our Lord Jesus Christ, the Father of glory, give you a Spirit of wisdom and revelation resulting in knowledge of him. May the eyes of your hearts be enlightened, that you may know what is the hope that belongs to his call, what are the riches of glory in his inheritance among the holy ones, and what is the surpassing greatness of his power for us who believe, in accord with the exercise of his great might: which he worked in Christ, raising him from the dead and seating him at his right hand in the heavens, far above every principality, authority, power, and dominion, and every name that is named not only in this age but also in the one to come. And he put all things beneath his feet and gave him as head over all things to the church, which is his body, the fullness of the one who fills all things in every way.

Luke 24:46-53
Jesus said to his disciples: “Thus it is written that the Christ would suffer and rise from the dead on the third day and that repentance, for the forgiveness of sins, would be preached in his name to all the nations, beginning from Jerusalem. You are witnesses of these things. And behold I am sending the promise of my Father upon you; but stay in the city until you are clothed with power from on high.” Then he led them out as far as Bethany, raised his hands, and blessed them. As he blessed them he parted from them and was taken up to heaven. They did him homage and then returned to Jerusalem with great joy, and they were continually in the temple praising God.

For those of you with children, how would you survive if you lost your children in a car accident? Or, what would we say to parents who have just lost their children? We’d love them, help them, and pray for them. We may even try to explain to them why God allows suffering.

Brothers, sisters, and guests, all those ways are good but there’s something more that only a few of us could do: Those of us who ourselves have lost children would be asked by God to share with them how He got us through our grief and pain.

Today, Jesus says in the Gospel, “You are witnesses of these things” (Lk 24:48), and part of witnessing includes sharing with other people what God has powerfully done in our lives. The Gospel says, “He opened their minds to understand the scriptures, and he said to them, ‘Thus it is written, that the Messiah is to suffer and to rise from the dead on the third day, and that repentance and forgiveness of sins is to be proclaimed in his name to all nations, beginning from Jerusalem. You are witnesses of these things” (Lk 24:45-48).

He opens their minds to understand the Scriptures, to remind them that God Himself chose to rescue us from suffering not by eliminating it, but by overcoming it through love. Jesus never gave into temptation; He loved His Father and us to the very end. What He also said was true: He would rise again! And He did! Because the disciples saw all this with their own eyes, they now need to witness to it. Why? Because the story of their experience with Jesus would touch the heart in ways abstract ideas wouldn’t. Stories are more real and practical for people. Stories strengthen souls.

Two weeks ago during Mass, we talked about devout conversations, where we ask questions of substance to give people an opportunity to share what God is doing in their lives—an act of love (https://thejustmeasure.ca/2019/05/19/5-types-of-questions-that-help-us-pay-attention-to-god/). After that Mass, some of you asked me such beautiful questions. For example, some people asked me, “What’s the best part of being a pastor here?” I said, “When people don’t fall asleep during the homily.” Just kidding. The best part is being able to contribute in a small but powerful way to people encountering Christ and then becoming saints. Have you had any devout conversations? I hope so.