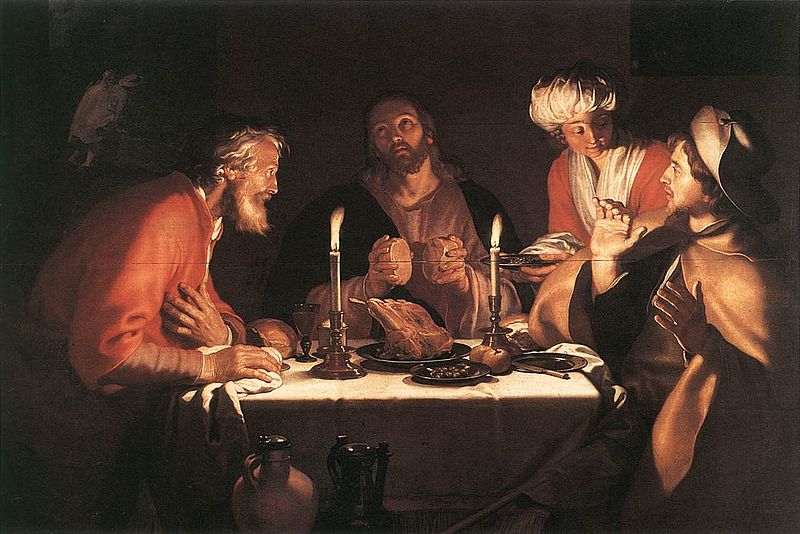 The disciples of Jesus recounted what had taken place along the way, and how they had come to recognize him in the breaking of bread.

While they were still speaking about this, he stood in their midst and said to them, “Peace be with you.” But they were startled and terrified and thought that they were seeing a ghost. Then he said to them, “Why are you troubled? And why do questions arise in your hearts? Look at my hands and my feet, that it is I myself. Touch me and see, because a ghost does not have flesh and bones as you can see I have.” And as he said this, he showed them his hands and his feet. While they were still incredulous for joy and were amazed, he asked them, “Have you anything here to eat?” They gave him a piece of baked fish; he took it and ate it in front of them.

He said to them, “These are my words that I spoke to you while I was still with you, that everything written about me in the law of Moses and in the prophets and psalms must be fulfilled.” Then he opened their minds to understand the Scriptures. And he said to them, “Thus it is written that the Christ would suffer and rise from the dead on the third day and that repentance, for the forgiveness of sins, would be preached in his name to all the nations, beginning from Jerusalem. You are witnesses of these things.”
Luke 24:35-48

Lest the Apostles should be troubled at the thought, "How shall we private individuals give our testimony to the Jews and Gentiles who have killed You?" Jesus adds, "And, behold, I send the promise of my Father upon you." which indeed He had promised by the mouth of the prophet Joel, "I will pour my Spirit upon all flesh." (Joel 2:28)

Just as a general does not permit his soldiers who are about to meet an opponent unarmed, so also the Lord does not permit His disciples to go forth to the conflict before the descent of the Spirit. And hence He adds, "But tarry you in the city of Jerusalem, until you be endued with power from on high." Note that Jesus did not say, "until you receive," but be "endued with," showing the entire protection of the spiritual armor. That is, not with human but heavenly power.

This command to the disciples to abide in the city until they received the Holy Spirit should be seen as a warning from Jesus that having fully instructed the disciples concerning the virtue of preaching, those who are imperfect should not presume to preach to prevent being corrected in the future. For we abide in a city, when we keep ourselves close within the gates of our minds, lest by speaking we wander beyond them; that when we are perfectly endued with sanctifying grace, we may then go out beyond ourselves to instruct others.