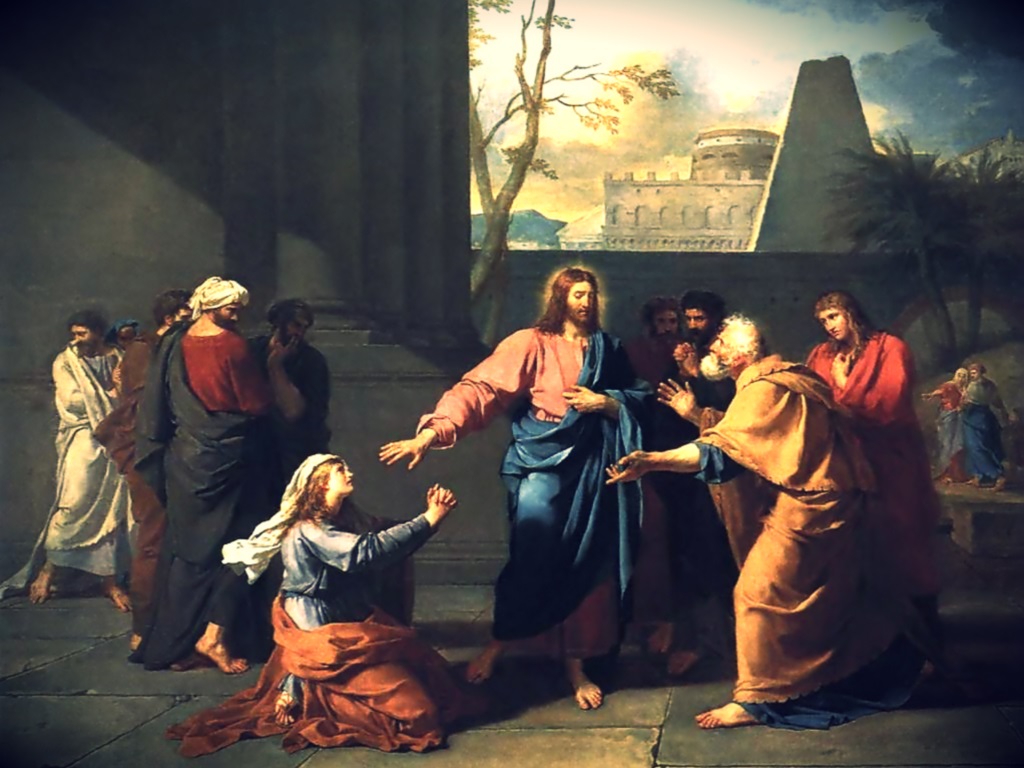 At that time Jesus withdrew to the region of Tyre and Sidon. And behold, a Canaanite woman of that district came and called out, “Have pity on me, Lord, Son of David! My daughter is tormented by a demon.” But he did not say a word in answer to her. His disciples came and asked him, “Send her away, for she keeps calling out after us.” He said in reply, “I was sent only to the lost sheep of the house of Israel.” But the woman came and did him homage, saying, “Lord, help me.” He said in reply, “It is not right to take the food of the children and throw it to the dogs.” She said, “Please, Lord, for even the dogs eat the scraps that fall from the table of their masters.” Then Jesus said to her in reply, “O woman, great is your faith! Let it be done for you as you wish.” And her daughter was healed from that hour.
Matthew 15:21-28

Observe this Canaanite woman's prudence; she does not dare to contradict Jesus, nor is she vexed with the commendation of the Jews, and the evil word "dog" applied to herself; But she said, "Yea, Lord, yet the dogs eat of the crumbs which fall from their masters' table." He said, "It is not good"; she answers, "Yet even so, Lord;" He calls the Jews children, she calls them masters; He called her a dog, she accepts the office of a dog; as if she had said, "I cannot leave the table of my Lord."

This was the cause why Christ was so backward, that He knew what she would say, and would not have her so great excellence hid; whence it follows, Then Jesus answered and said to her, O woman, great is your faith, be it to you according to your will. Observe how much the woman herself had contributed to her daughter's healing; and therefore Christ said not to her, "Let your daughter be healed", but, "Be it to you according to your will"; that you may perceive that she had spoken in sincerity, and that her words were not words of flattery, but of abundant faith. And this word of Christ is like that word which said, Let there be a firmament and it was made; so here, And her daughter was made whole from that hour. Observe how she obtains what the Apostles could not obtain for her; so great a thing is the earnestness of prayer. He would rather that we should pray for our own offenses ourselves, than that others should pray for us.

If the Lord delays the salvation of a soul at the first tears of the supplicating Church, we ought not to despair, or to cease from our prayers, but rather continue them earnestly.