Jesus said: “Whom are you looking for?” 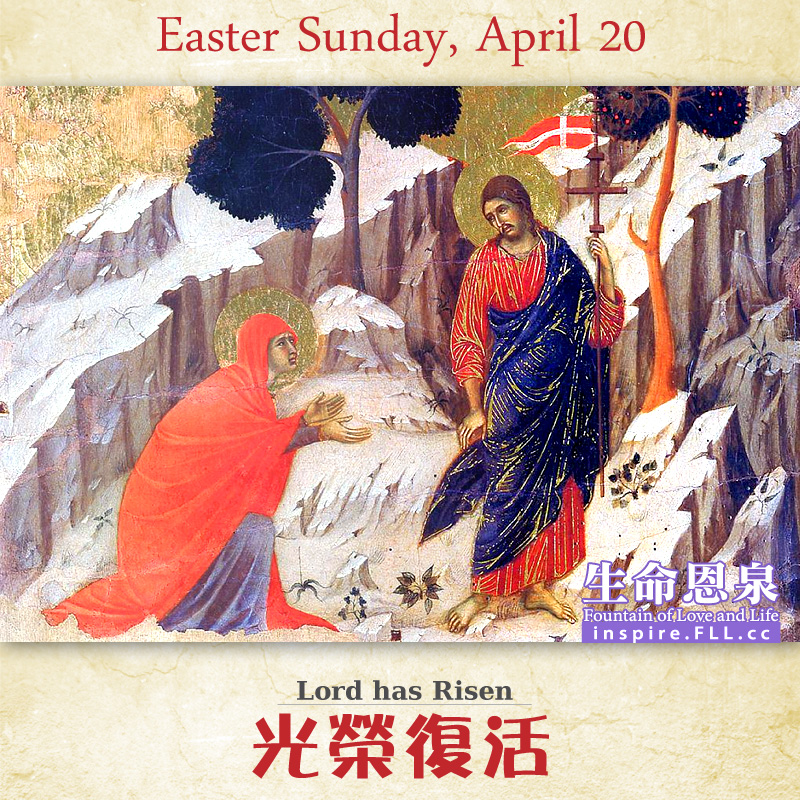 The Mass of Easter Sunday

Peter proceeded to speak and said: “You know what has happened all over Judea, beginning in Galilee after the baptism that John preached, how God anointed Jesus of Nazareth with the Holy Spirit and power. He went about doing good and healing all those oppressed by the devil, for God was with him. We are witnesses of all that he did both in the country of the Jews and in Jerusalem. They put him to death by hanging him on a tree. This man God raised on the third day and granted that he be visible, not to all the people, but to us, the witnesses chosen by God in advance, who ate and drank with him after he rose from the dead. He commissioned us to preach to the people and testify that he is the one appointed by God as judge of the living and the dead. To him all the prophets bear witness, that everyone who believes in him will receive forgiveness of sins through his name.”

When every dream in our lives seems to vanish and every expectation dashed, the sight of an empty tomb can be devastating. The fear within us can blindsight us from seeing the real meaning of the empty tomb. And we doubt whether we will survive our own Good Fridays.

Jesus Christ has risen and has renewed the face of the earth! We should see the world with new eyes. We should “seek the things that are above”. (Colossians 3:1) And as we look beyond the darkest moments of our lives, we will then see the hopes arising from the empty tomb and a whole new world awaiting us. The empty tomb is no longer a fear that grips but a promise that delivers. Jesus is no longer in the tomb!

Instead of setting out to look for Jesus in the empty tomb, let us set out to look for and encounter the Risen Lord elsewhere. Where? As we proclaim the Good News to others; as we live out what we proclaim through our good deeds; and as we love to the point that really hurts, there is Jesus!

Does God require us to learn to humble and die to ourselves so that He may be exalted and glorified more?