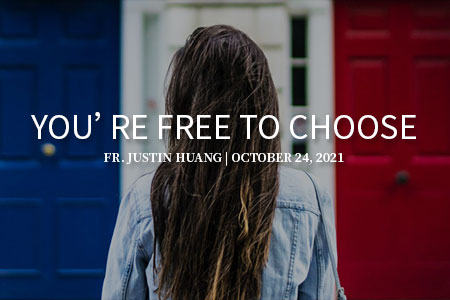 Jeremiah 31:7 - 9
Thus says the LORD: Shout with joy for Jacob, exult at the head of the nations; proclaim your praise and say: The LORD has delivered his people, the remnant of Israel. Behold, I will bring them back from the land of the north; I will gather them from the ends of the world, with the blind and the lame in their midst, the mothers and those with child; they shall return as an immense throng. They departed in tears, but I will console them and guide them; I will lead them to brooks of water, on a level road, so that none shall stumble. For I am a father to Israel, Ephraim is my first-born.

Hebrews 5:1 - 6
Brothers and sisters: Every high priest is taken from among men and made their representative before God, to offer gifts and sacrifices for sins. He is able to deal patiently with the ignorant and erring, for he himself is beset by weakness and so, for this reason, must make sin offerings for himself as well as for the people. No one takes this honor upon himself but only when called by God, just as Aaron was. In the same way, it was not Christ who glorified himself in becoming high priest, but rather the one who said to him: You are my son: this day I have begotten you; just as he says in another place: You are a priest forever according to the order of Melchizedek.

Mark 10:46 - 52
As Jesus was leaving Jericho with his disciples and a sizable crowd, Bartimaeus, a blind man, the son of Timaeus, sat by the roadside begging. On hearing that it was Jesus of Nazareth, he began to cry out and say, "Jesus, son of David, have pity on me." And many rebuked him, telling him to be silent. But he kept calling out all the more, "Son of David, have pity on me." Jesus stopped and said, "Call him." So they called the blind man, saying to him, "Take courage; get up, Jesus is calling you." He threw aside his cloak, sprang up, and came to Jesus. Jesus said to him in reply, "What do you want me to do for you?" The blind man replied to him, "Master, I want to see." Jesus told him, "Go your way; your faith has saved you." Immediately he received his sight and followed him on the way.

Before I tell you why, let me just remind you that we’re doing this challenge for two reasons: 1) When we make Jesus the centre of our lives, we can’t hide it; it’s a personal decision that has public effects; 2) As Christians, we want to celebrate that people have made Jesus the centre of their lives.  People celebrate what’s important, right?  That said, there should be no pressure.

When I was in the seminary, there was a time when I felt I had to become a priest.  No one put this pressure on me, but I felt that, if God wanted me to become a priest, then I had to do it.  And one time, I went to P. Matthew and started opening up.  This was a deep fear that I hadn’t told anyone, maybe because I was afraid of the answer.  I asked him, “Father, will I go to hell if I don’t become a priest?”  Yes, it was an irrational idea, but most pressure usually is irrational.  Father responded, “No.  God respects your freedom, and marriage is a beautiful vocation.”  You know what happened when he said that?  I finally felt free to choose priesthood.  That’s interesting: When I felt pressure to choose priesthood, I couldn’t choose it freely.  But, when that pressure was removed, I finally felt I could choose it.

This is a universal human experience: In 2008, at World Youth Day in Australia, I was encouraging one of the teenagers in our group to go hear a theology of the body talk.  We stood on a street corner for 20 minutes arguing, and then I said, “Okay, look, you don’t have to go.  Just go to something worthwhile.”  He then said, “Okay, Father, I’ll go.”  Ah!!!

The Second Reading refers to the gentleness priests should have, and this describes pre-eminently Jesus: “He is able to deal gently with the ignorant and wayward, since he himself is subject to weakness” (Heb 5:2).  Jesus understands our weak, human nature.  He knows what it’s like to be tempted away from God the Father, and so He deals with us very gently when we’re tempted.

Now it’s true that Jesus does deal with all of us differently.  The Reading specifies ‘the ignorant and wayward,’ the former being those who sin unknowingly, and the latter those who sin knowingly.  Jesus was gentle with those who were sincere, but was very harsh with the Pharisees since they knew better.  That’s because being gentle doesn’t mean never challenging people.  On the contrary, when we love people, we challenge them according to their capacity!  Jesus warned us numerous times about the reality of hell, that if we break the commandments in serious ways, we choose hell.  That’s not unfair pressure, that’s just reality.  Unfair pressure is when our family doesn’t love us anymore because we don’t follow Jesus.

Even when Jesus warns us of hell, He still gives us freedom.  When He told the parable of the Prodigal Son, notice how the father in the story gives the son the freedom to leave the home.  He accepts his son’s choice.  “He can imagine what the young son is going to do, but he lets him go his way” (Pope Benedict XVI, Jesus of Nazareth, Volume 1, 203).

It’s sad, but sometimes we need to run away from God the Father and ruin our life, in order to choose freely to come home.  We need to see for ourselves what life is like without Jesus, and He gives us this freedom.

And Jesus asks, “What do you want me to do for you?” (Mk 10:51).  Do you really want to be healed?  Don’t think it’s obvious, because sometimes we don’t want to be healed of our anger, laziness, or envy.  We’re used to them.  In Jn 5:40, Jesus says to his Jewish opponents, “But you do not want to come to me to have life.”  Isn’t that interesting?  He says that because not all people want to be saved.  Some people prefer this life to God’s promise; immediate gratification is better to them than trusting God.  And Jesus tells his opponents the consequences, that they won’t have life unless they come to Him.

There are consequences to actions.  If we choose not to be disciples, then God still loves us, but we lose out on the blessings of following Him.  So freedom does not mean we can’t have expectations.  God expects us to keep the commandments.  He expects people to follow their conscience.  I expect our young people to act with courtesy, because they themselves know courtesy is important.  When children live with their parents, the parents have every right to ask them to come to Mass.  That’s not pressure, that’s a reasonable command of parents to children, just as they can expect their children to help out with chores, go to school, etc.

And freedom does not mean we can’t have standards.  If you make the decision to become Catholic, then you’re choosing to live as a Catholic, which means coming to Mass every Sunday.  If you choose to become a doctor, you must study.  If you work at Burger King, you can’t wear a shirt that says “McDonalds is better.”  These standards are part of what it means to carry out a job well.

In four weeks, when I ask, “Please raise your hand if you’ve made Jesus the centre of your life,” we shouldn’t experience any pressure.  And, if we haven’t made Jesus the centre, we simply don’t raise our hand.  Yes, there are consequences to this most important question, but our response should be made out of love, for Jesus.

The truth is that Jesus always loves us no matter what we choose.  Jesus wants our decision to be free.