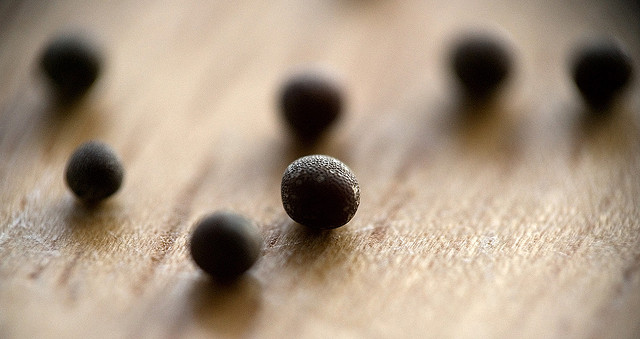 Jesus said, “What is the Kingdom of God like? To what can I compare it? It is like a mustard seed that a man took and planted in the garden. When it was fully grown, it became a large bush and the birds of the sky dwelt in its branches.”

Again he said, “To what shall I compare the Kingdom of God? It is like yeast that a woman took and mixed in with three measures of wheat flour until the whole batch of dough was leavened.”
Luke 13:18-21

While His adversaries were ashamed, and the people rejoiced at the glorious things that were done by Christ, Jesus proceeds to explain the progress of the Gospel under certain comparisons, as it follows, "What is the Kingdom of God like? To what can I compare it? It is like a mustard seed, etc."

The Lord Himself also is a grain of mustard seed; He wished to be bruised that we might see that "we are a sweet aroma of Christ." (2 Cor. 2:15) He wishes to be sown as a grain of mustard seed, that a man took and planted in the garden. For Christ was taken and buried in a garden, where he also rose again and became a tree, as it follows, "And it waxed into a great tree." For our Lord is a grain when He is buried in the earth, a tree when He is lifted up into the heaven. He is also a tree overshadowing the world, as it follows, "And the fowls of the air rested in his branches;" that is, the heavenly powers and saints. Peter is a branch, Paul is a branch, into whose arms we who were far off now fly, having taken up the wings of the virtues.

Sow then Christ in your spiritual garden; a garden is truly a place full of flowers, wherein the grace of your work may blossom; and the many scents of your different virtues be breathed forth. Wherever is the fruit of the seed, there is Christ.