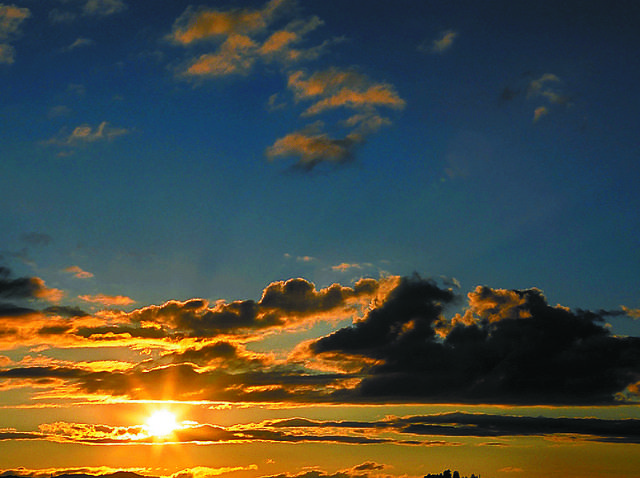 Jesus said to the crowds, “When you see a cloud rising in the west you say immediately that it is going to rain–and so it does; and when you notice that the wind is blowing from the south you say that it is going to be hot–and so it is. You hypocrites! You know how to interpret the appearance of the earth and the sky; why do you not know how to interpret the present time?

“Why do you not judge for yourselves what is right? If you are to go with your opponent before a magistrate, make an effort to settle the matter on the way; otherwise your opponent will turn you over to the judge, and the judge hand you over to the constable, and the constable throw you into prison. I say to you, you will not be released until you have paid the last penny.”
Luke 12:54-59

Those who can easily predetermine the state of the weather from the change of the elements, might also understand the time of our Lord's coming from the words of the Prophets if they wished. For the prophets have in many ways foretold the mystery of Christ; it became them therefore, if they were wise, to stretch their prospect beyond to the future, nor will ignorance of the time to come avail them after the present life. For there will be wind and rain, and a future punishment by fire; and this is signified when it is said, "A shower comes." It became them also not to be ignorant of the time of salvation, that is, "the coming of the Savior," through whom perfect piety entered into the world. And this is meant when it is said, "You say that there will be heat." Whence it follows in censure of them, "You hypocrites, you can discern the face of the sky and the earth, but how is it that you do not discern this time."

Now we must observe, that forecasting the future are necessary to the life of man, as long as we do not push our searches into their signs beyond due limits. For it is possible to discover some things with respect to coming rain, still more concerning heat and the force of the winds, whether partial or universal, stormy or gentle. But the great advantage that is given to daily life by these forecasts is known to every one. For it is of importance to the sailor to know the dangers of storms, to the traveler the changes of the weather, to the stewards the abundant supply of his fruits.

But if any of the people should allege their ignorance of the prophetical books as a reason why they could not discern the courses of the times, He carefully adds, "And why even of yourselves judge you not what is right," showing them that although uneducated they might still by their natural ability discern Jesus, who did works such as none other man did, to be above man, and to be God, and that therefore after the injustice of this world, the just judgment of the creation would come. But had it not been implanted in our nature to judge what is right, our Lord would never have said this.