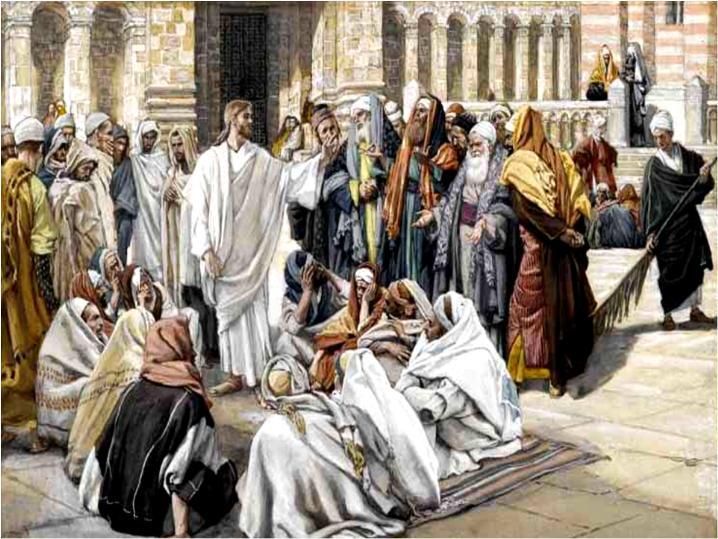 The Lord said: “Woe to you Pharisees! You pay tithes of mint and of rue and of every garden herb, but you pay no attention to judgment and to love for God. These you should have done, without overlooking the others. Woe to you Pharisees! You love the seat of honor in synagogues and greetings in marketplaces. Woe to you! You are like unseen graves over which people unknowingly walk.”

Then one of the scholars of the law said to him in reply, “Teacher, by saying this you are insulting us too.” And he said, “Woe also to you scholars of the law! You impose on people burdens hard to carry, but you yourselves do not lift one finger to touch them.”
Luke 11:42-46

In today's Gospel, Jesus reproves the arrogance of the boasting Jews in seeking the preeminence: for it follows, "Woe to you, Pharisees, for you love the uppermost seats in the synagogues, etc." By means of those things for which He blames us He makes us better. For He would have us be free from ambition, and not desire after vanity rather than the reality, which the Pharisees were then doing. For the greetings of men, and the rule over them, do not move us to be really useful, for these things fall to men though they be not good men. Therefore he adds, "Woe to you, who are as graves which appear not." For in wishing to receive greetings from men and to exercise authority over them, that they might be accounted great, they do not differ from hidden graves, which glitter indeed with outward ornaments, but are full of all uncleanness within.

Now the Lawyers were different from the Pharisees. For the Pharisees being separated from the rest had the appearance of a religious sect; but those skilled in the Law were the Scribes and Doctors who solved legal questions. But Christ brings a severe charge against the Lawyers, and subdues their foolish pride, as it follows, "And he said, 'Woe to you also, you Lawyers, for you lade men, etc.'" He brings forward an obvious example for their direction. The Law was burdensome to the Jews as the disciples of Christ confess, but these Lawyers binding together legal burdens which could not be borne, placed them upon those under them, taking care themselves to have no toil whatever.

As often as the teacher also does what he teaches, he lightens the load, offering himself for an example. But when he does none of the things which he teaches others, the loads appear heavy to those who learn his teaching, as being what even their teacher is not able to bear.