Healing in Body and Soul 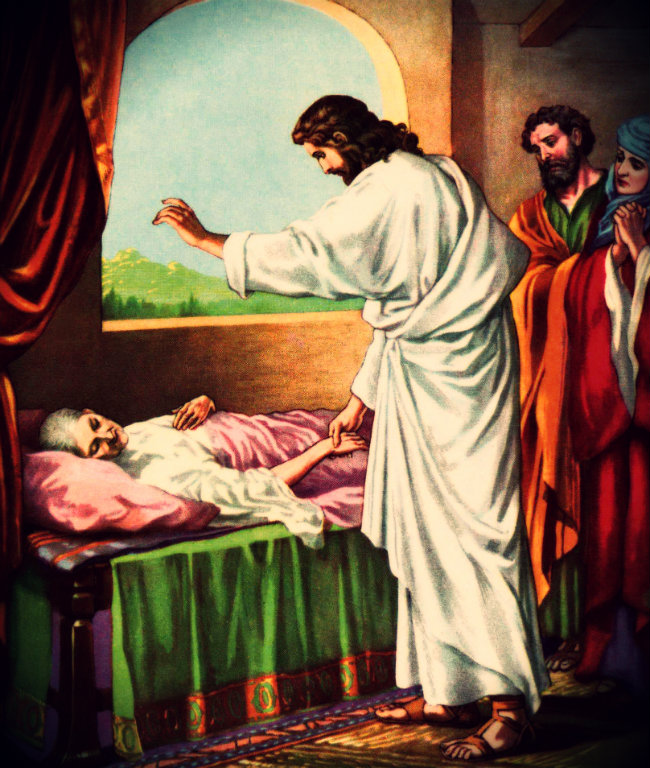 After Jesus left the synagogue, he entered the house of Simon. Simon's mother-in-law was afflicted with a severe fever, and they interceded with him about her. He stood over her, rebuked the fever, and it left her. She got up immediately and waited on them.

At sunset, all who had people sick with various diseases brought them to him. He laid his hands on each of them and cured them. And demons also came out from many, shouting, “You are the Son of God.” But he rebuked them and did not allow them to speak because they knew that he was the Christ.

At daybreak, Jesus left and went to a deserted place. The crowds went looking for him, and when they came to him, they tried to prevent him from leaving them. But he said to them, “To the other towns also I must proclaim the good news of the Kingdom of God, because for this purpose I have been sent.” And he was preaching in the synagogues of Judea.
Luke 4:38-44

Luke, having first introduced a man delivered from an evil spirit, goes on to relate the healing of a woman. For our Lord had come to heal each sex, and he ought first to be healed who was first created. Hence it is said, "And he arose out of the synagogue, and entered into Simon's house." For Jesus honored His disciples by dwelling among them, and so making them the more zealous.

Now, see how Christ abides in the house of a poor man, suffering poverty of His own will for our sakes, that we might learn to visit the poor, and not despise the destitute and needy. It follows: "And Simon's wife's mother was taken with a great fever: and they besought him for her." Here Luke speaks figuratively, as of a command given to a rational being, saying, that the fever was commanded, and did not neglect the work of Him who commanded it. Hence it follows: "And she arose, and ministered to them."

For since the disease was curable, He shows His power by the manner of the cure, doing what others could never do. For after the allaying of the fever, the patient needs much time before he is restored to his former health, but at this time all took place at once. If we weigh these things with deeper thoughts, we shall consider the health of the mind as well as the body; that the mind which was assailed by the temptations of the devil may be released first. Eve did not hunger before the serpent beguiled her, and therefore against the author of evil himself ought the medicine of salvation first to operate by going to confession.

At one time at the request of others, at another of his own accord, our Savior cures the sick, showing that He is far aloof from the passions of sinners, and ever grants the prayer of the faithful, and what they in themselves little understand He either makes intelligible, or forgives their not understanding it. As, "Who understands his own errors? Lord, cleanse me from my secret faults." (Psalm 19:12) Let us, therefore, also receive Jesus: for when He has entered into us, and we have received Him into mind and heart, then He will quench the fever of unbefitting pleasures, and raise us up, and make us strong, even in things spiritual, so as for us to minister unto Him, by performing those things that please Him.

Healing in Body and Soul

Have mercy on me

Pope Francis: The Church’s journey always takes place between the Cross and the Resurrection