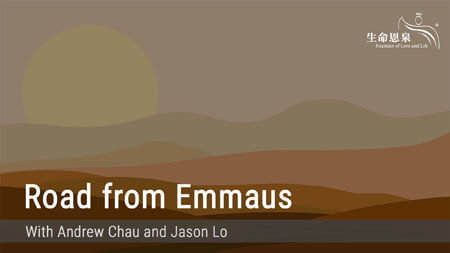 On today’s episode, Andrew and Jason dig into the foundations and fundamentals of their faith life. Why are they Catholic? Before they can answer that question though, it’s necessary to take a look at a couple of other questions: Why believe in religion at all? And of all the religions in the world, why Christianity? The first part of a two-episode mini-series, they touch on moral relativism, and how Christianity isn’t just about being a good person or following a set of rules; it’s being in a relationship with God. They also announce some exciting news off the top–you can now find the Road from Emmaus podcast on Fountain of Love and Life!
04:38 – Encountering the Fountain of Love and Life on the Road from Emmaus
09:10 – “Why religion?” and moral relativism
15:25 – Who are we to judge? What does it mean to have intellectual discourse?
22:49 – Religion provides a structure of consistent thinking
28:43 – Religion is often more than just having good ethics or morals
31:27 – “Why Christianity?”: Christianity is more than just good morals
35:29 – God seeks to be in relationship with us
43:15 – C.S. Lewis’s thoughts on how Jesus is God, and not just a moral teacher

“Road from Emmaus” Ep046 – On Friendship, and Decision-Making, with DA