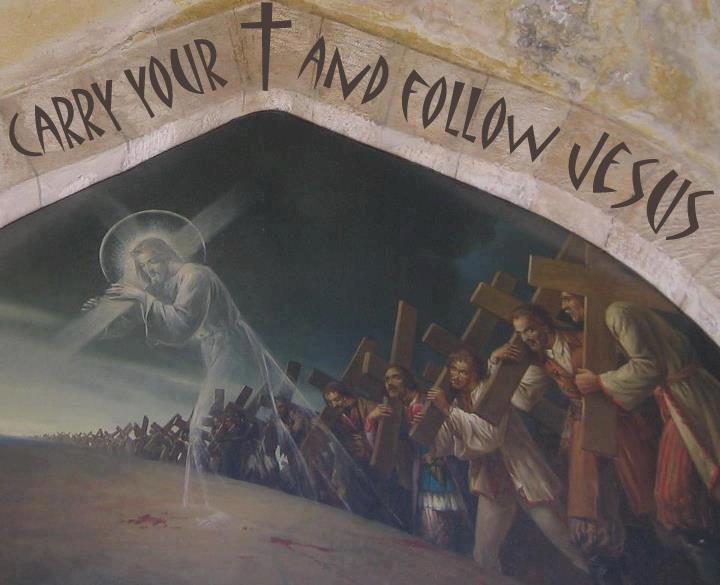 Jesus said to his disciples, “Whoever wishes to come after me must deny himself, take up his cross, and follow me. For whoever wishes to save his life will lose it, but whoever loses his life for my sake will find it. What profit would there be for one to gain the whole world and forfeit his life? Or what can one give in exchange for his life? For the Son of Man will come with his angels in his Father's glory, and then he will repay each according to his conduct. Amen, I say to you, there are some standing here who will not taste death until they see the Son of Man coming in his Kingdom.”
Matthew 16:24-28
A man may seem to keep from sin, yet if he does not believe in the cross of Christ, he cannot be said to be crucified with Christ; whence it follows, "And take up his cross." And because malefactors often suffer grievous things, that you should not suppose that simply to suffer evil is enough, Jesus adds the reason of suffering when He says, "And follow me." For His sake you are to endure all, and to learn His other virtues; for this is to follow Christ correctly, to be diligent in the practice of virtues, and to suffer all things for His sake.

But if you should reign over the whole world, you would not be able to buy your soul; whence it follows, "Or what shall a man give in exchange for his soul?" As much as to say, "If you lose goods, you may have it in your power to give other goods to recover them; but if you lose your soul, you can neither give another soul, nor any thing else in ransom for it." What we see happening in the soul, we see the same happen to the body; for if you should surround a body afflicted with an incurable disease with ten thousand diadems, they would not heal it.

Having thus called upon His disciples to deny themselves and take up their cross, the hearers were filled with great terror, therefore these severe tidings are followed by more joyful news; "For the Son of Man shall come in the glory of his Father with the holy Angels." Do you fear death? Hear the glory of the triumph. Do you dread the cross? Hear the attendance of the Angels.

As for those who will not die until they see the Son of Man coming in His Kingdom, it was fulfilled in the three disciples to whom the Lord, when transfigured in the mount, showed the joys of the eternal inheritance; these saw Jesus coming in His kingdom that is, shining in His effulgent radiance, in which, after the judgment passed, He shall be beheld by all the saints.