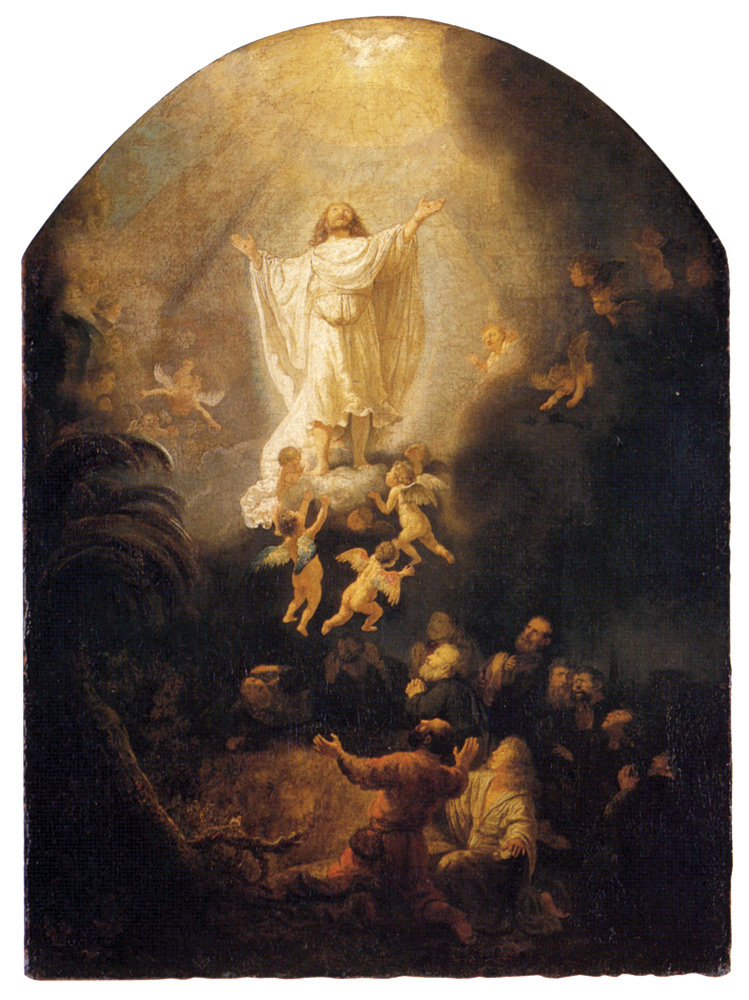 In the first book, Theophilus, I dealt with all that Jesus did and taught until the day he was taken up, after giving instructions through the Holy Spirit to the apostles whom he had chosen. He presented himself alive to them by many proofs after he had suffered, appearing to them during forty days and speaking about the kingdom of God. While meeting with the them, he enjoined them not to depart from Jerusalem, but to wait for “the promise of the Father about which you have heard me speak; for John baptized with water, but in a few days you will be baptized with the Holy Spirit.”

When they had gathered together they asked him, “Lord, are you at this time going to restore the kingdom to Israel?” He answered them, “It is not for you to know the times or seasons that the Father has established by his own authority. But you will receive power when the Holy Spirit comes upon you, and you will be my witnesses in Jerusalem, throughout Judea and Samaria, and to the ends of the earth.” When he had said this, as they were looking on, he was lifted up, and a cloud took him from their sight. While they were looking intently at the sky as he was going, suddenly two men dressed in white garments stood beside them. They said, “Men of Galilee, why are you standing there looking at the sky? This Jesus who has been taken up from you into heaven will return in the same way as you have seen him going into heaven.”

May the God of our Lord Jesus Christ, the Father of glory, give you a Spirit of wisdom and revelation resulting in knowledge of him. May the eyes of your hearts be enlightened, that you may know what is the hope that belongs to his call, what are the riches of glory in his inheritance among the holy ones, and what is the surpassing greatness of his power for us who believe, in accord with the exercise of his great might, which he worked in Christ, raising him from the dead and seating him at his right hand in the heavens, far above every principality, authority, power, and dominion, and every name that is named not only in this age but also in the one to come. And he put all things beneath his feet and gave him as head over all things to the church, which is his body, the fullness of the one who fills all things in every way.

The eleven disciples went to Galilee, to the mountain to which Jesus had ordered them. When they saw him, they worshiped, but they doubted. Then Jesus approached and said to them, “All power in heaven and on earth has been given to me. Go, therefore, and make disciples of all nations, baptizing them in the name of the Father, and of the Son, and of the Holy Spirit, teaching them to observe all that I have commanded you. And behold, I am with you always, until the end of the age.”

“Spirit”, “apostles”, “Mary”, “prayer” – What better ways to reveal the Church? How can any one of these constitutive elements be missing when the Church being revealed is the Church of Christ?

After the ascension of the Son and on the threshold of the Pentecostal outpouring of the Spirit, we read in the gospel of the 7th Sunday of Easter the concluding words of Jesus' priestly prayer, said in a tone of immediacy with regard to his coming death and glorification.

Equally striking are the peace and satisfaction that the words of Jesus conveyed in this intense Father-and-Son dialogue. After all, “the work that you gave me to do” has now been accomplished; “the words you gave me I have given them” (John 17: 4, 8); the Messianic Kingdom is all but firmly established; a new era of the Spirit is about to commence; the baton for bringing the economy of salvation to full fruition is to be passed on from the Son to the Holy Spirit.

Jesus' promise to usher in a new era of the Church by the outpouring of the Holy Spirit was fulfilled at the Pentecost. Before this historic and pivotal moment when the Church was made manifest to the world (CCC 1076), it is only fitting that the apostles gathered in the upper room “to devote themselves with one accord to prayer” (Acts 1:14) together with the Blessed Mother. “Spirit”, “apostles”, “Mary”, “prayer” – What better ways to reveal the Church? How can any one of these constitutive elements be missing when the Church being revealed is the Church of Christ?