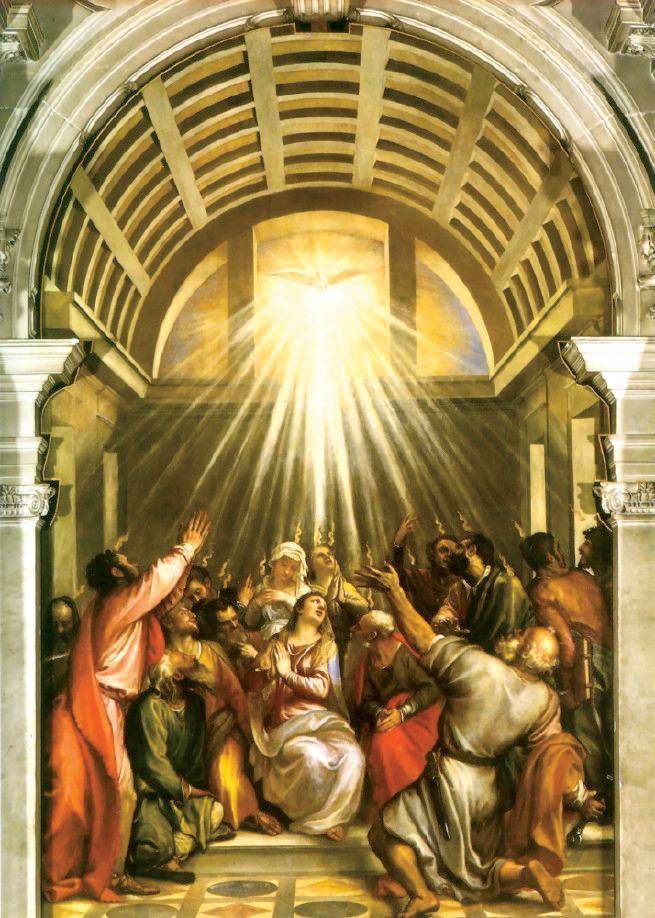 When the time for Pentecost was fulfilled, they were all in one place together. And suddenly there came from the sky a noise like a strong driving wind, and it filled the entire house in which they were. Then there appeared to them tongues as of fire, which parted and came to rest on each one of them. And they were all filled with the Holy Spirit and began to speak in different tongues, as the Spirit enabled them to proclaim.

Now there were devout Jews from every nation under heaven staying in Jerusalem. At this sound, they gathered in a large crowd, but they were confused because each one heard them speaking in his own language. They were astounded, and in amazement they asked, “Are not all these people who are speaking Galileans? Then how does each of us hear them in his native language? We are Parthians, Medes, and Elamites, inhabitants of Mesopotamia, Judea and Cappadocia, Pontus and Asia, Phrygia and Pamphylia, Egypt and the districts of Libya near Cyrene, as well as travelers from Rome, both Jews and converts to Judaism, Cretans and Arabs, yet we hear them speaking in our own tongues of the mighty acts of God.”

No one can say, “Jesus is Lord, ” except by the Holy Spirit.

As a body is one though it has many parts, and all the parts of the body, though many, are one body, so also Christ. For in one Spirit we were all baptized into one body, whether Jews or Greeks, slaves or free persons, and we were all given to drink of one Spirit.

On the evening of that first day of the week, when the doors were locked, where the disciples were, for fear of the Jews, Jesus came and stood in their midst and said to them, “Peace be with you.” When he had said this, he showed them his hands and his side. The disciples rejoiced when they saw the Lord. Jesus said to them again, “Peace be with you. As the Father has sent me, so I send you.” And when he had said this, he breathed on them and said to them, “Receive the Holy Spirit. Whose sins you forgive are forgiven them, and whose sins you retain are retained.”

This Sunday's Gospel reading can be seen as a “rehearsal” for Jesus' closest disciples to anticipate the coming of the Spirit to the early Christian community on Pentecost, which took place 50 days after Jesus' resurrection as depicted in the first reading Acts 2:1-11. From the sequence of the words spoken by Jesus to His disciples, we can see how Jesus prepares his disciples to “do the works that He does, and do greater ones than these, because He is going to the Father” (John 14:12) and will send forth His Spirit upon all of them.

“Peace be with you” (John 20:21a) The first signs of the presence of the Spirit are peace and unity, the breaking down of barriers between Jews and Greeks, slaves and free. The Spirit brings about compassion, reconciliation, and forgiveness, renewing human hearts and thus the face of the earth. He also knocks down individualism because to each individual the manifestation of the Spirit is given for the common good, which aims to build up the community as opposed to individuals' fame and glory.

“As the Father has sent me, so I send you.” (John 20:21b) The Father sent the Son to redeem the world, and the Son sends His disciples to proclaim this Good News, empowered by the Spirit. One of the gifts of the Spirit is fortitude, not fear (CCC 1831). He converts our hearts, and energizes us to accomplish this mission. The Spirit gives us abilities. In a Spirit-filled community, there are varieties of gifts, services and activities which the same God activates in everyone, for the common good of the community.

After Jesus has prepared our hearts and minds to accept His command to be sent out to do His work, we are ready to receive the Holy Spirit. “He breathed on them and said to them, ‘Receive the Holy Spirit.'” (John 20:22) Charged with the Holy Spirit and equipped with the different gifts bestowed on different individuals in the community, the disciples are empowered to work as One Body in Christ to preach the Good News, to heal, and to cast out demons in Jesus' name. Fearless are they even though they know the very cost of discipleship is to follow the same path of Jesus to Calvary. They take Jesus' word to heart and carry the peace that Jesus granted them to the ends of the earth.

With the Holy Spirit, they know Jesus is with them always, until the end of time. “If you ask anything of me in my name, I will do it.” (John 14:14) This is the assurance straight from the mouth of Jesus. To whom shall we fear?

Does God require us to learn to humble and die to ourselves so that He may be exalted and glorified more?