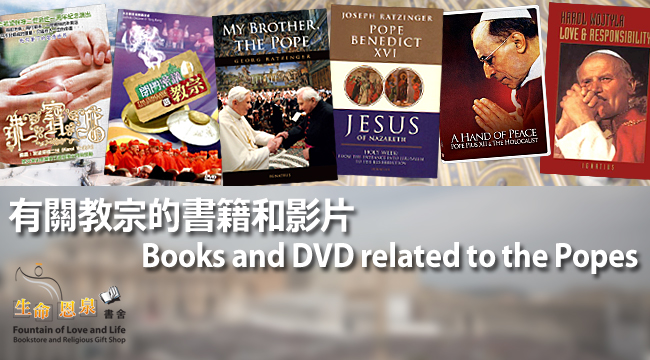 生命恩泉書舍有些由榮休教宗本篤十六世及真福若望保祿二世撰寫的書籍，亦有一些介紹教宗選舉和教宗庇護十二世的影碟，以供大家更加認識前任教宗和他們的教導。歡迎大家選購。
FLL Bookstore carries some books written by Pope Emeritus Benedict XVI and Blessed John Paul II, as well as some documentaries about the Papal Election and Pope Pius XII.

Drawing from his own pastoral experience as a priest and bishop before he became Pope John Paul II, Karol Wojtyla has produced a remarkably eloquent and resourceful defense of Catholic tradition in the sphere of family life and sexual morality. He writes in the conviction that science--biology, psychology, sociology--can provide valuable information on particular aspects of relations between the sexes, but that a full understanding can be obtained only by study of the human person as a whole. Central to his argument is the contrast between the personalistic and the utilitarian views of marriage and of sexual relations. The former views marriage as an interpersonal relationship, in which the well-being and self-realization of each partner are of overriding importance to the other. It is only within this framework that the full purpose of marriage can be realized. The alternative, utilitarian view, according to which a sexual partner is an object for use, holds no possibility of fulfillment and happiness. Wojtyla argues that divorce, artificial methods of birth control, adultery (pre-marital sex), and sexual perversions are all in various ways incompatible with the personalistic view of the sexual self-realization of the human person.

Jesus of Nazareth is the Son of God, and no myth, revolutionary, or misunderstood prophet, insists Benedict XVI. He thinks that the best of historical scholarship, while it can't "prove" Jesus is the Son of God, certainly doesn't disprove it. Indeed, Benedict maintains that the evidence, fairly considered, brings us face-to-face with the challenge of Jesus--a real man who taught and acted in ways that were tantamount to claims of divine authority, claims not easily dismissed as lunacy or deception.

Why was Jesus rejected by the religious leaders of his day? Who was responsible for his death? Did he establish a Church to carry on his work? How did Jesus view his suffering and death? How should we? And, most importantly, did Jesus really rise from the dead and what does his resurrection mean? The story of Jesus raises many crucial questions.

My Brother the Pope by Msgr. Georg Ratzinger, Michael Hesemann   View In Bookstore

It wasn't always the case that Msgr. Georg Ratzinger lived in the shadow of his younger brother, Joseph. Georg was an accomplished musician, who for over 30 years directed the Regensburger Domspatzchor, the world-famous boys choir of the Regensburg cathedral. Brother Joseph was a brilliant young professor, but mostly known in German academic circles.

Now Georg writes about the close friendship that has united these two brothers for more than 80 years. This book is a unique window on an extraordinary family that lived through the difficult period of National Socialism in Germany. Those interested in knowing more about the early life of Benedict XVI will not be disappointed. They will also learn of the admirable character and inspiring example of the parents, and see how the Catholic faith can shape not just a family, but an entire culture-in this case, that of Bavaria.

Pope Pius XII guided the Catholic Church through two tumultuous decades, firmly establishing himself as a champion of peace, and the moral voice of a world torn apart by war. However, shortly after his death in 1958, his heroic legacy has been called into question by some historians who claim that his alleged “silence” during the Nazi holocaust allowed Hitler to carry out his Final Solution against the Jews. Pope Pius XII protested vehemently the persecution of Jews. His was a prophecy in action, which saved the lives of countless victims of the neo-pagan Nazi reign of terror, rather than potentially counter-productive public statements.