Feast of the Exaltation of the Holy Cross 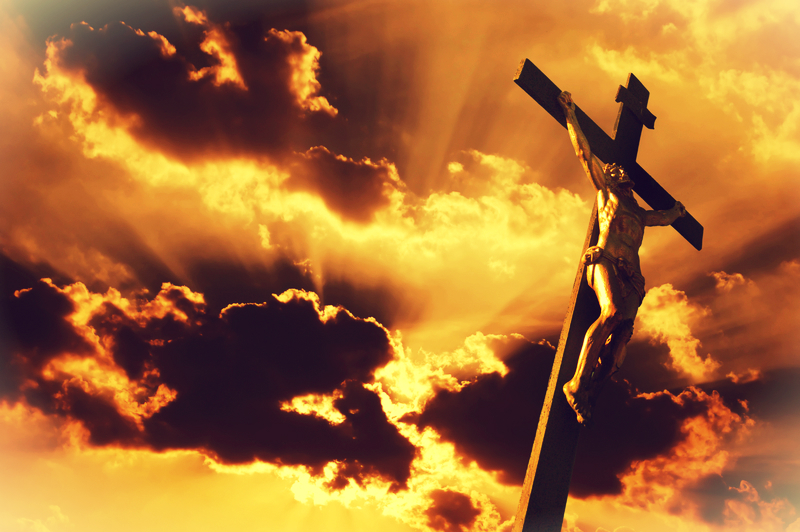 Jesus said to Nicodemus: “No one has gone up to heaven except the one who has come down from heaven, the Son of Man. And just as Moses lifted up the serpent in the desert, so must the Son of Man be lifted up, so that everyone who believes in him may have eternal life.

For God so loved the world that he gave his only Son, so that everyone who believes in him might not perish but might have eternal life. For God did not send his Son into the world to condemn the world, but that the world might be saved through him.”
John 3:13-17

The figure of the bronze serpent has the appearance of the beast, but not its poison; in the same way Christ came in the likeness of sinful flesh, being free from sin. By Christ's being lifted up, understand His being suspended on high, by which suspension He sanctified the air, even as He had sanctified the earth by walking upon it. Herein too is typified the glory of Christ: for the height of the cross was made His glory for in that He submitted to be judged, He judged the prince of this world; for Adam died justly, because he sinned; our Lord died unjustly, because He did no sin. So He overcame Satan, who delivered Him over to death, and thus delivered Adam from death. And in this the devil found himself vanquished, that he could not torment our Lord upon the cross into hating His murderers: but only made Him love and pray for them the more. In this way the cross of Christ was made His lifting up, and glory.

Truly through the Son of God shall the world have life; for no other cause came He into the world, except to save the world. God sent not His Son into the world to condemn the world, but that the world through Him might be saved. Because however Jesus says this, slothful men in their sins and negligence, abuse God's mercy, and say, "There is no hell, no punishment; God forgives us all our sins." But let us remember, that there are two advents of Christ; one past, the other to come. The former was, not to judge but to pardon us; the latter will be, not to pardon but to judge us. It is of the former that He says, "I have not come to judge the world." Because He is merciful, instead of judgment, He grants an internal remission of all sins by baptism; and even after baptism opens to us the door of repentance, which had He not done all had been lost, for "all have sinned, and come short of the glory of God." (Romans 3:23)

To warn us against flattering ourselves that we can sin with impunity, He says of the unbeliever, "he is judged already." But first He says, He that believes in Him is not judged. "He who believes", He says, not "who inquires". But what if the believer's life is impure? St. Paul very strongly declares that such are not believers: "They confess", he says, "that they know God, but in works deny Him." (Titus 1:16) That is to say, such will not be judged for their belief, but will receive a heavy punishment for their works, though unbelief will not be charged against them. The physician, so far as his will is concerned, heals the sick. If the sick despises or will not observe the directions of the physician, he destroys himself.