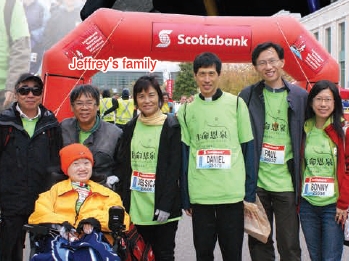 A Special Companion on a 5K Journey

I believe many of us who participated in the Scotiabank Toronto Waterfront Marathon/Walkathon this past Sunday as part of the FLL team had experienced a certain level of anxiety before the event. For instance, I wondered what the weather would be like; I debated how many layers of clothing I should be wearing; I wasn't sure whether I should be bringing sunblock and a hat, or an umbrella or poncho... We all did some preparation to get ready for this exciting fundraising event. But compared to what the Man's family had to go through to prepare for the event, our effort was really insignificant.

Jeffrey Man, a grade 10 boy who has been suffering from spinal muscular atrophy since he was nine-months old, joined us for the 5km walk this year. He is paralyzed and all that he can move are his right fingers and elbows to a very small degree. He is wheelchair-bound and relies on othersí assistance for all of his daily activities. Despite his severe disability, he is a very bright, positive and faithful person. Fountain of Love and Life has covered his story in one of our TV episodes a few years ago. (https://www.youtube.com/watchfll#p/search/0/JG6IS14qMt8) Jeffrey loves to socialize and participate in all kinds of events. His parents always do their best to enable him to live as normal kids do despite all the challenges involved. After seeing the large number of disabled persons participating in the STWM walkathon in their wheelchairs last year, we thought Jeffrey might be able to join us this year and have some fun. So we invited his family to join the FLL team at the walkathon this year and they gladly accepted the invitation.

When I saw Jeffrey at the Exhibition Place on Sunday morning, I could tell he was really excited. He had his signature big smile on his face. His parents, Jessica and Eric, were also very happy. I was thankful that they made all the necessary arrangement to bring Jeffrey downtown for the walk. Before the event, Jessica did a lot of research on the best way for them to get to the walkathon starting point. She wanted to take public transit as there would be a lot of road closures in the downtown area due to the event. However, she found that although the subway is accessible, streetcars are not, and that meant they would not be able to reach the starting point by public transportation. They ended up driving to the EX and parked there, but Eric would have to go back to the starting point after finishing the 5K walk to pick up his car. It was quite a bit of hassle, but these loving parents would do anything for Jeffrey.

The weather was quite chilly and windy, but it didnít dampen Jeffrey's spirit. Once the walk had started, he had fun watching the walkers, runners, especially those dressed in all kinds of interesting costumes, around him. He controlled his high-tech wheelchair, which has some laser beams for sensing the slight movements of his right fingers. His wheelchair is very powerful and can go at a maximum of 4km/hour. At first he could control it pretty well, but because it was quite windy and chilly, he started to have some difficulty. It turned out that since he felt cold, his fingers were kind of frozen and could hardly move to control the wheelchair's laser sensors. So Jessica tried to use the manual control to operate the wheelchair, but it was much slower than Jeffrey operating it through the laser sensors. To make the wheelchair move faster, Eric also pushed it from time to time, but he couldn't do it for too long because the wheelchair weighed 300lbs! The three of them took turns to operate the wheelchair. When Jefffrey's fingers had warmed up a bit, he would operate it on his own; when his fingers felt numb or frozen, Jessica would take over and use the manual control; and Eric would take over and push for a while.

Some other participants helped push the wheelchair too, but no one could do it for long as it was way too heavy. To make it more challenging, there were some light showers from time to time, and Jessica had to hold the umbrella to shelter Jeffrey. Despite all these challenges, the entire Manís family remained very joyful and positive. No one complained about anything. Walking with them along the way, I was really touched by the love and unity of this family. Jessica and Eric's focus was to fulfill Jeffrey's wish of participating in the event. When Jeffrey finally reached the finish line, a number of FLL team members were there to cheer for him. You should see how proud and happy he was when he passed the finish line and when Paul put the medal around his neck!

For the rest of the participants, reaching the finish line was the end of the story. They could just take the TTC or hop into their cars. But that's not the end of the walkathon story for the Man's family. Eric still had to go back to the EX to pick up his van and then pick up Jessica and Jeffrey near the finish line. Originally he planned to take the shuttle bus arranged by the STWM organizers, but since it appeared that the shuttle would not run frequently, one of our team members, Vince, offered to give him a ride to the EX. Another team member, Alice, and I accompanied Jessica and Jeffrey to wait in a small lobby at the Bay.

It was pretty chilly after the race, and we wanted to wait for Eric in a Tim Horton's on Yonge Street, but the step at the door made it impossible for Jeffrey to go in. There were actually a few other fast food places along the way which also had a step at the door. For the first time, I realized the challenges that disabled people face in this seemingly advanced and accessible city of Toronto. Such an easy step for us can be a barrier that someone in a wheelchair cannot overcome. It's a sad reality.

Once we got into the Bay lobby to warm up, Jessica spent at least 15 minutes massaging Jeffrey's hands to warm him up. I felt sorry that Jeffrey felt so cold from the 5K journey. While waiting in the lobby, he had a lot of fun looking at people passing through the revolving doors. I didn't understand what was so fascinating about revolving doors. Jessica explained to me that there are not a lot of places with revolving doors near where they live, and they don't often go downtown or into big office buildings. Jeffrey finds pleasure in these simple things.

As we were waiting for Eric to come back, Jessica told us how anxious she was when preparing for the walkathon. Since they would not be able to get back to their car once they started the walk, she had to make sure she had brought everything that Jeffrey would possibly need with them. In a big backpack, she had packed all his medication and medical equipment, food, raincoat, etc. They also had to plan when and where they would eat breakfast, when and where to stop for washroom-break on their way down so that Jeffrey would not have to use the bathroom during the walk. (Although there were porta-potties along the way, they were not wheelchair accessible.) I was really touched by the amount of planning and preparation they had to do in order to participate in the walkathon to support FLL. Whatís even more touching is their unconditional love for Jeffrey. It would be so easy for them to turn down our invitation to participate in the walkathon because of all the hassles involved. But out of their love for Jeffrey and their love for God, they were willing to make all the sacrifices. It ended up taking Eric almost two hours to go from Eaton Centre to the EX and back due to the road closures and traffic jam. We finally got to the gathering for Team FLL at around 4:45pm, when most of the participants had left. Although it was a long wait and we missed most of the celebration, I was really glad that I had the opportunity to journey with the Man's family all the way to the "finishing line". I have visited their home quite a few times, but I had never journeyed with them on the road. It was really eye-opening and inspiring to see this family in action and to witness how they overcome the challenges that they face in their daily lives together. They are such a perfect testimony of the bible verse: "Love bears all things, believes all things, hopes all things, endures all things. Love never fails." (1 Corinthians 13:7-8)

May God bless Jeffrey with good health and his family with strength and courage to face all of life's challenges.