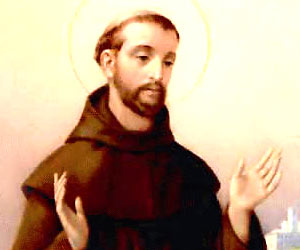 St. Francis of Assisi was born in 1182. At the age of twenty-two, while praying at St. Damian's church, Francis heard a voice saying, “Francis, go and rebuild My House”. He started to repair neglected churches.

Francis lived as a hermit. Later a merchant and a canon of the cathedral joined him, and thus began the Franciscan order. They lived by manual labor and by begging alms. They called themselves “Friars Minor” or little brothers.

Francis was ordained a deacon so that he could preach the Gospel, but out of awe for the Holy Eucharist, he did not receive priestly order.

Francis travelled to Rome to get the approval of Innocent III for his Rule. There was difficulty, for his group bore some resemblance to some heretical groups. But Innocent had a dream that Francis carried on his shoulders the great Basilica of St. John Lateran. Innocent III, therefore, approved the work of Francis.
On September, 1224 Francis received the stigmata. Francis had a great love for nature, and his enthusiasm for praising God through creation is expressed in the Canticle of Brother Sun.

Francis died in 1226 and was canonized two years later.

A faithful disciple of St. Francis was St. Clare. At the age of eighteen, she escaped by night and consecrated herself to God in the presence of St. Francis and his companions. She was soon joined by her younger sister, Agnes. Eventually her own mother and other noble ladies also put themselves under her rule. The Poor Clare nuns observed perpetual abstinence, constant silence, and perfect poverty. St. Clare died in 1253.

St. Anthony of Padua (+1231) became a Franciscan in 1220. He spent his last ten years preaching in Italy and France. He was a wonderful preacher with the gift of miracles.