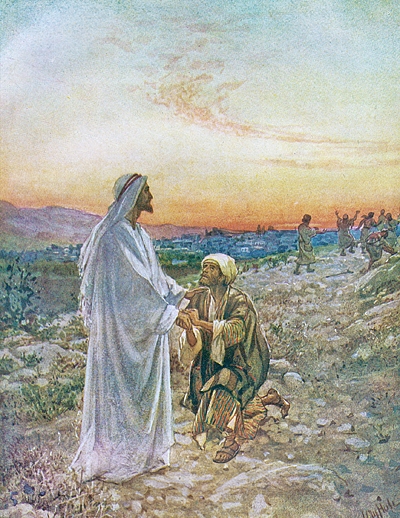 這篇默想由生命恩泉文摘編輯小組撰寫，內容以下列文章為根據: Commentaries on the daily readings by Sacred Space, 常年期第二十八主日.

As Jesus continued his journey to Jerusalem, he travelled through Samaria and Galilee. As he was entering a village, ten lepers met him. They stood at a distance from him and raised their voices, saying, "Jesus, Master! Have pity on us!" And when he saw them, he said, "Go show yourselves to the priests." As they were going they were cleansed. And one of them, realizing he had been healed, returned, glorifying God in a loud voice; and he fell at the feet of Jesus and thanked him. He was a Samaritan. Jesus said in reply, "Ten were cleansed, were they not? Where are the other nine? Has none but this foreigner returned to give thanks to God?" Then he said to him, "Stand up and go; your faith has saved you."
Luke 17:11-19

The gospel reading for this Sunday is about Jesus and the ten lepers who came to ask for His mercy. Because leprosy is contagious, the lepers stood from Jesus at a distance. The way they shouted to Jesus, "Jesus, Master! Have pity on us!" and the way they obeyed His command of showing themselves to the priests, showed that they have great faith in Jesus. Even before they reached the priests, they were healed on their way.

This act of showing themselves to the priests was actually quite important for the lepers, because lepers were always treated as outcasts, and even when they were cleansed, they need the priests' verification and announcement before they could become part of the community again.(Lev 14:1-32)

Though all ten lepers were healed, only one returned to Jesus. The Gospel reading specially mentioned that this man was a Samaritan, someone who was despised by the Jews. On one hand, this shows that Jesus' mercy is unconditional. He did not treat the lepers differently based on their race. On the other hand, from what Jesus said to the Samaritan, it indicated that Jesus values a person's response to Him more than the person's identity or background. While all ten lepers had faith in the Lord's mercy and power and obeyed His command, nine of them didn't return after obtaining what they wanted from Him. Only the Samaritan came back, glorified God, and fell at the feet of Jesus and thanked Him.

At the end, Jesus said to the Samaritan, "Stand up and go; your faith has saved you." This time Jesus didn't just mean the cure of the Samaritan's leprosy, as it had already been cured. What Jesus said has a deeper meaning: because of this man's faith in God, that he returned to praise and thank Him, he would also be awarded salvation of his soul and everlasting life. Many of us might have been like those lepers, who approached Jesus for help on things we couldn't control or when we felt helpless in life. How we approach Him at the beginning doesn't matter too much, as He is our merciful Lord who is always willing to help; but what is more important is that our relationship with Him should not just be about seeking help. When Jesus answers our prayers, what do we usually do first? Are we like the nine lepers who never returned, or should we learn from the Samaritan? Jesus longs to be the Lord of our lives. May we convert our heart, mind and soul to Him totally, and always glorify and thank God. This is the way to holiness, salvation and everlasting life.

This reflection is prepared by the FLL Inspire editorial team as a digest of the following two articles: Commentaries on the daily readings by Sacred Space, 常年期第二十八主日.